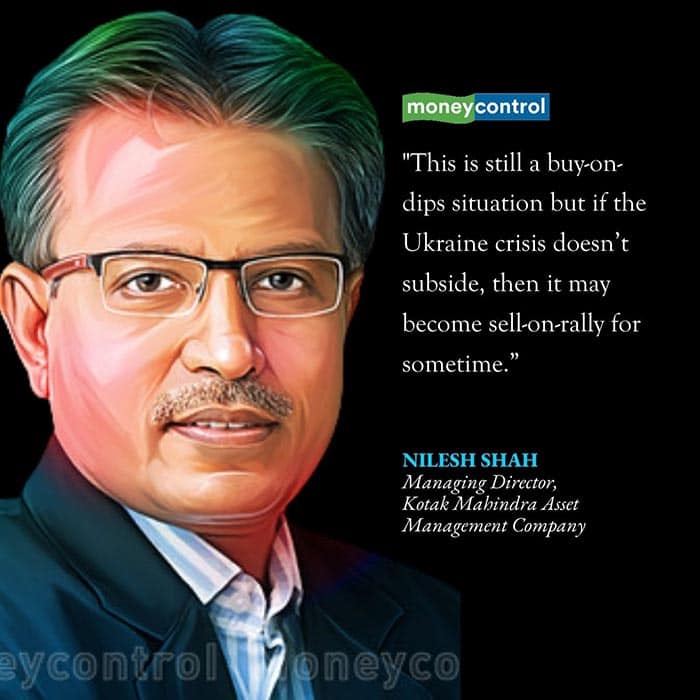 He believes that the “recovery in markets over the past couple of days is obviously aided by positive sentiments about election results as well as talk that the war in Ukraine seems to be coming to some sort of closure”. There have been signals of reconciliation between Russia and Ukraine, and their foreign ministers are expected to meet again today.

“Oil prices have softened a bit though they are still at elevated levels, metals prices have also declined, which means that there is some light at the end of the tunnel because of which we are seeing some sort of recovery,” he added.

He doesn’t see this recovery as a dead cat bounce as it all depends on how the situation unfolds in Russia and Ukraine, and its impact on commodity prices, including energy.

He advises investors to hold on to some “dry powder” (cash) in the current scenario because it’s a well-known fact that after the war, there is always an uptick in the market but it is uncertain to say when the war will end and what its impact will be. He feels investors should not go all-in in the current market conditions.

So does it mean that the market has moved from buy-on-dips to sell-on-rally?

“My recommendation is that investors should follow their asset allocation model. This is still a buy-on-dips situation but if the Ukraine crisis doesn’t subside, then it may become sell-on-rally for some time,” Shah advised.

Shah firmly believes that the initial public offering (IPO) of the Life Insurance Corporation of India (LIC) has the ability to do what the Maruti IPO did to the markets in 2003.

In 2000, the telecom-media story went bust. Several mutual funds had lost a lot of investors’ money. Till 2003, the markets had a torrid time as investors were not comfortable with the capital markets and money was moving into debt funds even though debt fund managers were recommending investors to move to equity funds.

Shah is of the opinion that “the whole negative sentiments about the capital markets changed thanks to the Maruti Suzuki IPO in 2003. It was a brand which was known to every Indian, it was a company which was priced properly and post-listing, the IPO gave a positive experience to investors”. This positive experience inevitably turned the tide in favour of equity markets, as more and more investors started coming back.

During the 2003-08 rally, the Sensex grew seven to eight times, which Shah believes was all on the basis of the Maruti Suzuki IPO bringing back domestic investors.

“I hope and pray that LIC is a bigger brand than Maruti and if it is priced properly and gives positive experience to investors, then millions of investors will flock to the markets not only from urban India but also from semi-urban and rural India,” he said.

The Bank Nifty has declined significantly in the past months and this is despite the fact that Indian banks have cleaned up their books to a large extent. So have the banking stocks now become attractive?

“Banks today have a far better balance sheet, NPA (non-performing assets) problem is not there even though we are coming out of the pandemic and more importantly we are going to see some rise in interest rates which in general are supportive of margins for the banks,” Shah said.

Banking stocks have witnessed huge selling pressure as the sector is over-owned by foreign portfolio investors (FPIs). “In some of the best of blue-chip banks, we saw a kind of exodus by FPIs which put pressure not only on those banks but also on other banks. In my view, it is time to absorb supply from FPIs in the banking sector, the margins will look better and NPA recovery going forward will add to the profitability while valuation-wise most banks are in a reasonable space,” he said.

Investors might have to bear some short-term pain but “this is the accumulation time in banking because when the FPI selling will stop, this sector will outperform the market”.

Take on other sectors

Shah is underweight on consumer staples as he feels that the pricing power is still missing and consumption has become a little softer.

On the other hand, he sees recovery in the investment cycle with a pickup in exports for capital goods/industrials. This is aided by the government’s spending on infrastructure which is likely to pick up pace, along with a rising private investment cycle led by renewable energy, sugar, steel and cement. “We are being overweight on capital goods and industrials while we are underweight on consumer staples,” he added.

In the IT services sector, he is overweight on large-cap IT stocks and underweight on mid-cap IT companies. 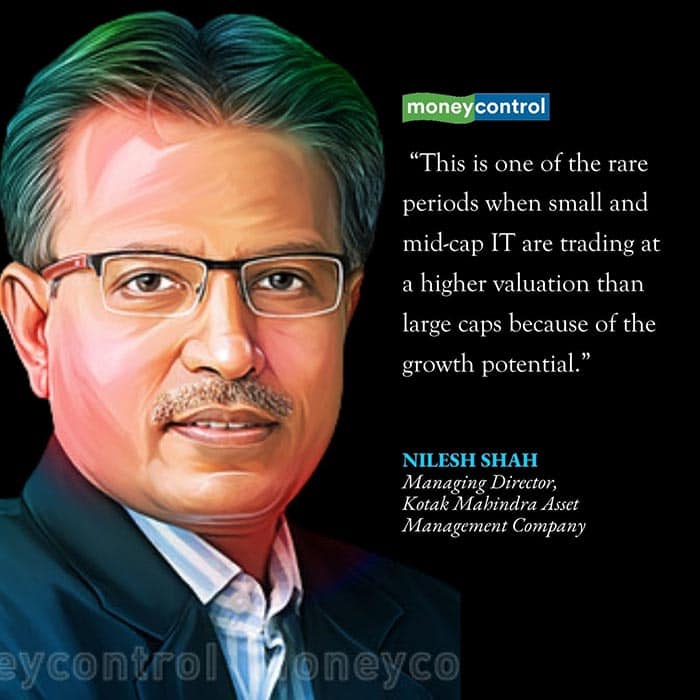 He said that “this is one of the rare periods when small and mid-cap IT are trading at a higher valuations than large-caps because of the growth potential.” They are likely to grow faster than large-cap IT but that will not be sustainable, he added.

“In terms of valuations, there might be some kind of price or time correction in mid/small-cap IT stocks and, therefore, we are overweight on large-cap IT companies.”

Is it the beginning of a bear market?

Shah doesn’t think so. Citing the example of crude oil, he said that the situation is likely to ease in the near future, which will help improve market sentiments.

“When combined together, this will be more than what Russia is supplying and with all the sanctions, Russia will be forced to sell its oil and gas in the global market, which will result in a surplus oil market and will bring down prices,” said Shah. As they say, the remedy of ‘high all prices’ is ‘high oil prices’. 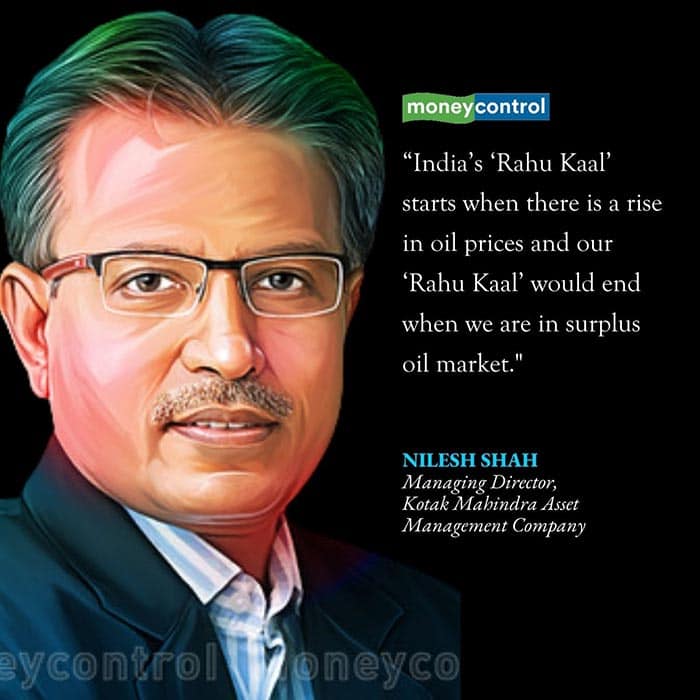 He added, “India’s ‘rahu kaal’ starts when there is a rise in oil prices and our ‘rahu kaal’ would end if this situation works out and we are in a surplus oil market when India will suddenly look a far better place.”

Today, India is trading at much higher valuations compared to its peer group. Compared to Russia and South Africa, India is at a significantly higher premium. Even when compared to China, India’s valuations are much higher. “The current situation is ensuring that we are coming level to our peer group,” he said.

FPIs have become net sellers of late but Shah believes that six months down the line, FPI selling will subside and there are chances that they will become buyers again. 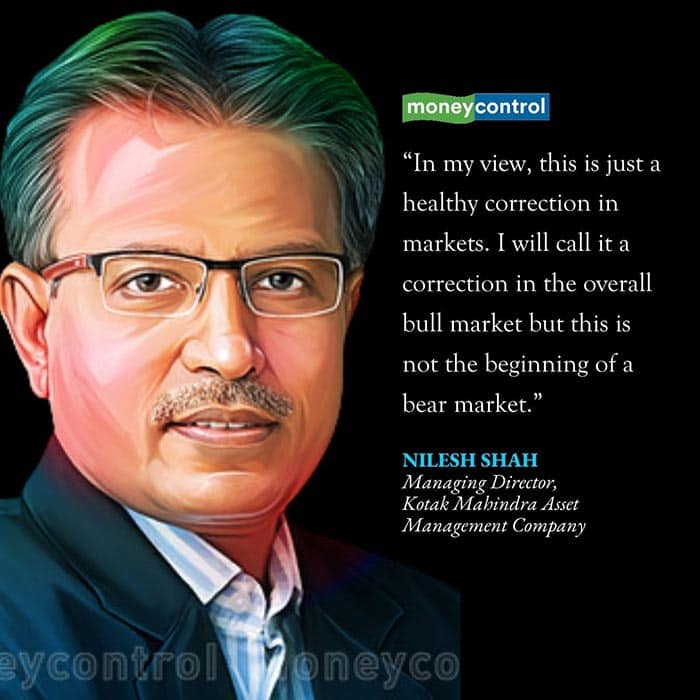 “In my view, this is just a healthy correction in markets. I will call it a correction in the overall bull market but this is not the beginning of a bear market,” said Shah.

He is of the opinion that gold will perform better than debt in the next three to five years and advises investors that, “it’s time to be marginally overweight on large-caps and marginally underweight on small- and mid-caps. There is a need to take an aggressive call.”