The Nifty50 gained nearly 150 points on February 10, extending uptrend for third consecutive session, thanks to the dovish policy presented by the Reserve Bank of India against analysts’ expectations of hike in reverse repo rate.

Rally was witnessed across sectors with Bank, Financial Services, Metal and IT indices being prominent gainers rising more than 1 percent each.

The Nifty50 formed bullish candle which resembles Hanging Man kind of pattern on the daily charts. Experts feel the index needs to decisively surpass 20-day moving average to extend uptrend in coming sessions, till then there could be rangebound and volatile trade.

A Hanging Man is a bearish reversal candlestick pattern that is usually formed at the end of an uptrend or at the top. In a perfect ‘Hanging Man’ pattern, there will be a small upper shadow or no upper shadow at all, a small body and a long lower shadow.

Also read – Gainers & Losers: 5 stocks that moved the most on February 10

“Albeit Nifty50 rallied in response to dovish RBI policy, by the end of the day, it registered a Hanging Man kind of formation which usually suggests exhaustion of short-term upswing. Moreover, at an intraday high of 17,639 levels, it tested its 20-day moving average and witnessed marginal pullback from day’s high sending a message that the medium-term trend is still down,” said Mazhar Mohammad, Founder & Chief Market Strategist at Chartviewindia.

He feels unless this counter conquers the said average further strength in the near term shall not be expected. “If it closes above 17,640 then it can initially extend the strength towards 17,794 levels.”

Contrary to this, “if this counter trades below 17,427 levels then it can come under selling pressure on an intraday basis with initial targets placed in the zone of 17,339 – 17,306 levels, said Mazhar Mohammad who advised short-term traders to remain neutral on the index.

Also read – Market gains for the third day, here are the 4 factors fuelled the rally

The abovementioned option data pointed towards an immediate trading range of 17,350 to 17,700 on the Nifty50.

The broader markets also gained with the Nifty Midcap 100 and Smallcap 100 indices rising third of a percent and half a percent, respectively.

Trade Spotlight: What should investors do with Asian Paints, Tata Chemicals, Indus Towers and Oberoi Realty? 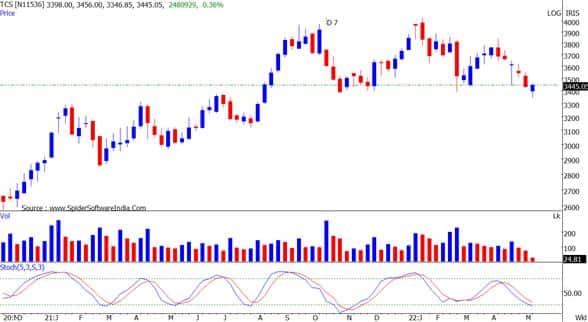 Hot Stocks | TCS, Power Mech Projects, NOCIL can give up to 10% return in short term, here#39;s why