The Nifty50 fell for the second consecutive session, slipping below the psychologically important 15,000-mark on March 5, dented by rising US bond yields and oil prices. All sectoral indices ended in the red, with banks, IT, metals and pharma stocks seeing a major correction.

It formed a small bearish candle that resembled a Spinning Top pattern on the daily charts and a Shooting Star pattern on the weekly scale. The index gained 2.8 percent during the week.

A spinning top is often regarded as a neutral pattern that suggests indecisiveness in the market. It can be formed in an uptrend as well as in a downtrend.

A ‘Shooting Star’ pattern is formed when an index comes under selling pressure as traders start booking profits at higher levels. This pattern is usually formed in an uptrend and is treated as a reversal pattern but would require confirmation before it can be concluded that the trend will get reversed in the near future.

Intraday traders should take short side exposure if the Nifty trades below 14,862 and look for a modest target of 14,750 by placing a stop above intraday high, said Mazhar Mohammad, Chief Strategist–Technical Research & Trading Advisory at Chartviewindia told Moneycontrol.

“In the next trading session, if the bulls fail to defend 14,862 levels, then the weakness shall get initially extended towards 14,628 levels,” Mohammad said.

Unless the market stabilises around 14,900, the trajectory shall remain in the southern direction, which may eventually lead to the index testing 14,467, he said.

If the index stabilises around 14,900, the near-term trend may once again turn sideways but with a positive bias in the 14,900–15,250 range. Strength in the index shall be expected to resume if it manages to get past 15,273, Mohammad said.

The index formed a bearish candle on the daily scale and continued forming lower highs-lower lows of the last two sessions. 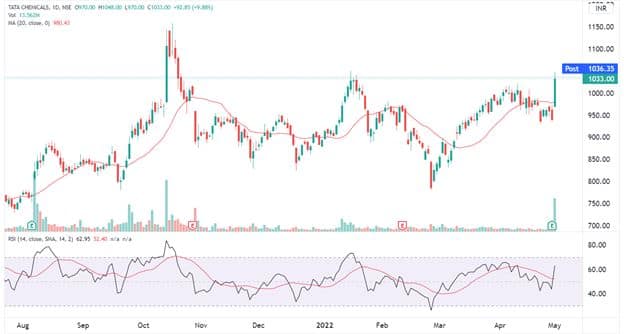 Trade Spotlight | What should investors do with Tata Chemicals, Can Fin Homes, Godrej Agrovet on Wednesday?