The Nifty50 opened strong and remained in the positive terrain throughout the session to close above the 15,300-mark for the first time on February 15, backed by optimistic global sentiment and improving corporate earnings.

Banking and financials led the rally as the BSE Sensex, too, reached a milestone by crossing the 52,000-mark.

The record high close saw the index form a bullish candle on the daily charts, as the closing was higher than the opening levels. Experts expect the rally to the index to march towards the 15,500-mark if the momentum sustains in the coming sessions.

Traders with a high-risk appetite should remain long on the index by placing a stop below 15,240 levels, Mazhar Mohammad, Chief Strategist – Technical Research & Trading Advisory at Chartviewindia.in told Moneycontrol.

The volatility cooled down further today, which could be supporting the market. India VIX was down by 2.57 percent to 21.47.

The Nifty50 appeared to have registered a breakout, with a brief consolidation of five trading sessions, signalling the resumption of the rally, Mohammad said.

The trading range remained narrow with 97 points, which was accompanied by a negative advance-decline ratio, suggesting caution in the broader markets which witnessed profit-booking, he said.

To make further gains, it is critical that the index sustains above 15,243 in the next session, he said. In such a scenario, a modest target of 15,500 is possible and beyond that higher target of 15,700 can’t be ruled out, he said.

If the Nifty registers a close below 15,243, then the breakout shall be deemed to have failed and the Nifty may once again slip into a corrective or a consolidation phase. More weakness shall not be expected unless Nifty closes below 15,100 levels.

“The index has been forming higher highs-higher lows from the last two sessions. Now it has to hold above 37,000 to witness a move towards 38,000, while on the downside support is seen at 36,500 and 36,000 levels,” Chandan Taparia, Vice President|Analyst-Derivatives at Motilal Oswal Financial Services said. 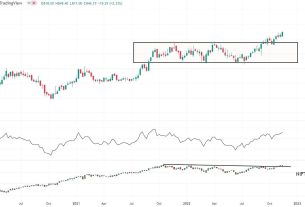 What are Option spreads and how to use them to get the best returns?

Hot Stocks | Here is why you should bet on Coforge, Shriram Transport Finance in short term