Indian market closed in the red for the fifth consecutive day in a row on February 22 pushing benchmark indices below crucial support levels. The S&P BSE Sensex plunged by more than 1,100 points while the Nifty50 was down by more than 300 points.

Sectorally, the action was seen in the metal index while selling pressure was visible in energy, realty, IT, auto, and capital goods stocks. Rise in COVID cases along with weak global cues were prominent factors pushing the benchmark indices lower, suggest experts.

“Rising economic restrictions from a spike in virus cases and weak global cues hit the domestic market sentiment. The rate of market fall was aggravated by a sharp rise in volatility, being a monthly F&O expiry week,” Vinod Nair, Head of Research at Geojit Financial Services told Moneycontrol.

“FPI inflows which were leading the rally slowed down due to global vulnerabilities from rising bond yield & inflation. However, this is a buy-on-dip market, a short-term correction will trigger new buying, as economic fundamentals have improved, with more focus on industrial & cyclicals,” he said.

Here is what experts are advising investors to do on February 23:

Nifty formed a Bearish Belt Hold kind of candle on daily scale as remained in bears grip and continues its formation of lower highs – lower lows of the last four trading sessions.

As the market is approaching the monthly expiry of the current month, the market could bounce back from 14500/49340 levels.

The Nifty witnessed the continuation of the bearish momentum from the last week. In the last week, it had formed a bearish outside bar & an Engulfing bear candle so today it witnessed follow-through action on the downside.

On the way down, the index had breached the key level of 15000, which resulted in increased selling pressure. Thus the Nifty has broken its 20 DMA today & is approaching the 40 DMEA, which are crucial short-term moving averages.

The overall structure shows further downside potential. The short-term target on the downside continues to be pegged at 14400. On the other hand, any minor degree bounce is likely to face resistance near 14800-14900. 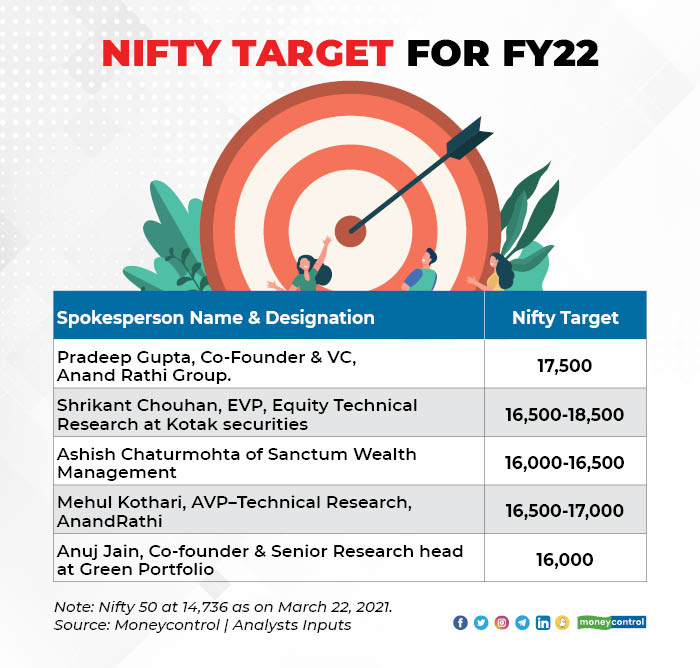 Pare your expectations, but follow Warren Buffett#39;s advice! Nifty likely to head towards 17,000 in FY22: Experts