The S&P BSE Sensex rallied 5 percent on Budget Day to post its best performance in percentage terms in the last 22 years while Nifty Bank hit a record high. Privatisation of two public sector banks, PSU recapitalisation, construction of bad bank, a growth-oriented Budget are some of the factors fuelling the rally in the banking space.

The Nifty Bank has rallied by about 10 percent post Budget and majority of gains were seen in strong retail banks such as ICICI Bank, HDFC Bank, Kotak Mahindra Bank, SBI, and IndusInd Bank.

The Nifty50 Bank that hit a fresh record high on Budget Day continued its journey on Tuesday as well when it hit a fresh intraday high of 34,652. However, investors chose to book profit after a strong double-digit rally.

Experts are of the view that the financials is clearly one sector which investors can go overweight on especially after the Budget 2021 which focused on driving growth in the economy.

“Setting of Stressed Asset Fund and Privatization of PSU banks will be a great positive for the ecosystem. The merging of PSU banks was a step in this direction and now with privatization of PSU, it will help in encouraging new players with a proven track record to boost better productivity and lending practices,” Vijay Kuppa, Co-Founder, Orowealth told Moneycontrol.

In the run-up to the Budget 2021, there are six stocks in the NiftyBank that rose 10-30 percent that include names like ICICI Bank, SBI, Axis Bank, Federal Bank, and IDFC First so far in 2021.

But, only three stocks in NiftyBank hit a fresh 52-week high that includes names like HDFC Bank, ICICI Bank, and IDFC First Bank. Data suggest that there is further upside in NiftyBank constituents that could take the index to new highs.  In coming sessions.

Rusmik Oza, Executive Vice President, Head of Fundamental Research at Kotak Securities told Moneycontrol that the growth-oriented budget has ignited a spark in all cyclical and economy-driven sectors including banking and NBFCs. 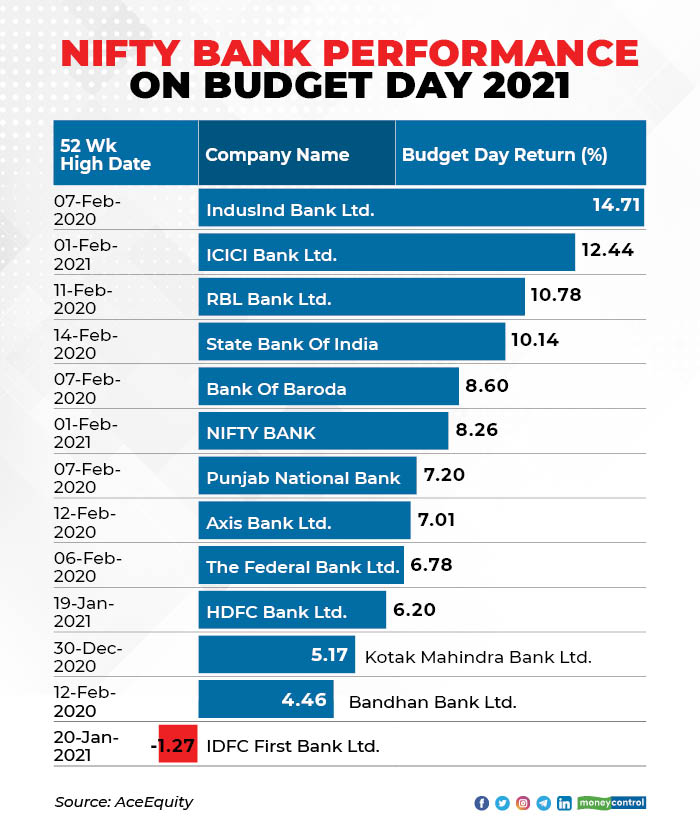 Let’s look at few Budget proposals that are positive for banks and the financial sector:

Considering the high level of provisioning by public sector banks of their stressed assets, Budget 2021 calls for measures to clean up the bank books.

An Asset Reconstruction Company Limited and Asset Management Company would be set up to consolidate and take over the existing stressed debt and then manage and dispose of the assets to Alternate Investment Funds and other potential investors for eventual value realization, said the Budget note.

“The step is in the right direction and details are awaited, swift steps on implementation of these announcements required given that past attempts at creating such vehicles (e.g. NIIF funded SPV, etc.) have not met with material success. In our view, the bad bank creation would have got more benefits to PSU banks had it been established earlier in the “asset quality recognition cycle”,” JM Financial said in a note.

“It is pertinent to note that for PSU banks to make material gains from transfer of these assets to the ARC/AMC, the recovery values will need to be greater than the current “net book value” of such assets,” it said.

Most PSU banks hold PCR >60% on the stressed assets created pre-Covid19 and the transfer value is unlikely to happen at a premium to net book value in our view, it will depend on swift recovery/realization of the assets under the new structure for PSU banks to see meaningful gains.


Budget 2021 prosed privatization of 2 PSU banks other than IDBI Bank and one General Insurance company in the year 2021-22. This would require legislative amendments.“Divestment of two PSU banks in a bid to expedite long-awaited reforms bode well for multiple re-rating of all PSU banks,” ICICI Direct said in a note.While the details are awaited, experts believe the most likely candidates will be from the pool of banks which were not part of consolidation in the first round.

“Bank of India, Central Bank of India, Indian Overseas Bank, Bank of Maharashtra and UCO Bank could be potential candidates. While these candidates are small and are not expected to provide any material resources to the GOI, we believe that this is a step in the right direction and can act as a test case for privatisation of other major PSU banks in future,” said the JM Financial note.

“Further recapitalisation of Rs200bn is proposed in FY22 – this is at lower end of expectations of Rs200-400bn. It was expected that after the infusion of Rs3.16trn in the last five years in PSU banks, this year it would be set lower in the range of Rs200-400bn,” ICICIdirect said in a note.

To address the infrastructure needs long-term debt financing, Budget 2021 proposed foundation of a professionally managed Development Financial Institution that will act as a provider, enabler, and catalyst for infrastructure financing.

The FM provided a sum of Rs 20,000 crores to capitalise on this institution. The ambition is to have a lending portfolio of at least Rs 5 lakh crores for this DFI in three years’ time.

“The proposal for setting up of a Development Finance Institution (DFI) with a capital of Rs 20,000 crore is a welcome move however lending target of Rs 5 lakh crore over the next three years sounds ambitious. TDS exemption on dividend payments to InVITs and REITS will certainly entice more sovereign wealth funds to invest into the sector,” Sandeep Upadhyay – MD – Infrastructure Advisory, Centrum Capital Ltd said.

JM Financial is positive on ICICI Bank, HDFC Bank, and SBI among large-cap in the banks and financial space.

ICICI direct is positive on AXIS and SBI.

Daily Voice | Better not to rush in and invest at one go, at least for the coming 3-6 months, says Harshad Chetanwala of MyWealthGrowth