17:02 2021
Print This Article
👤by India
Filed under
Market Outlook

The recent Financial Stability Report (FSR) of the Reserve Bank of India (RBI) came as a shock but, thankfully, did not do a lasting damage to banking and financial stocks. The Nifty Bank went on hit fresh record highs earlier in January 2021 after struggling to outperform on a year to date basis in the previous year.

According to the report released early in January, the central bank maintained a cautious stance on banks’ asset quality, which has been a  concern all along, and indicated that the gross non-performing assets (GNPAs) ratio for scheduled commercial banks could escalate to 13.5 percent under its baseline scenario.

If the situation worsens, the ratio could deteriorate to 14.8 percent in a severe stress scenario. The gross NPAs of banks stood at 7.5 percent in September 2020. This means NPA levels will nearly double even going by the base case scenario.

The RBI’s warning of a spike in gross NPAs to 14.8 percent of total loans is a worst-case scenario that may not necessarily happen if the economy picks up, experts say.

The big question facing investors is what should they buy? Experts favour private-sector lenders as well as players who are retail-focused.

“Most old private sector banks look attractive on a valuation basis as they trade at or below 1x on FY22E Book Value as compared to their ten averages of ~1.3-1.4x. However, earnings of these old private sector banks could be very volatile due to recognition of higher NPAs in the forthcoming quarters,” Rusmik Oza, Executive Vice President, Head of Fundamental Research at Kotak Securities told Moneycontrol. 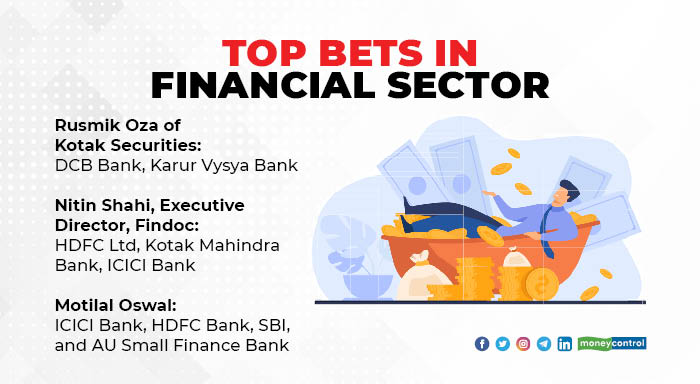 Oza added that even after the run-up in most banking stocks, they were seeing more than 20 percent upside in two old private sector banks—DCB Bank and Karur Vysya Bank.

Nitin Shahi, Executive Director, Findoc, too, said private banks should be accumulated on every dip. The bigger gets even bigger and be with the winners, he added.

“Invest in brands like HDFC, Kotak, ICICI where leaders were always leaders and will be the leaders even after 10 years,” he said.

Motilal Oswal is of the view that slippages are likely to increase over 2HFY21, particularly after the Supreme Court order gets lifted, many banks have already provided for this and carry an additional provisions buffer, which should limit the impact on profitability, even as credit cost remains elevated. “Our top buys remain ICICI Bank, HDFC Bank, SBI, and AU Small Finance Bank,” it said in a report.

However, on a year-to-date basis, the Nifty Bank closed lower by about 3 percent. The underperformer of 2020 could well turn out to be the outperformer of 2021, said experts. To be on the safe side, investors could increase their weightage in the private sector banks and reduce in the public sector holding or MSMEs. 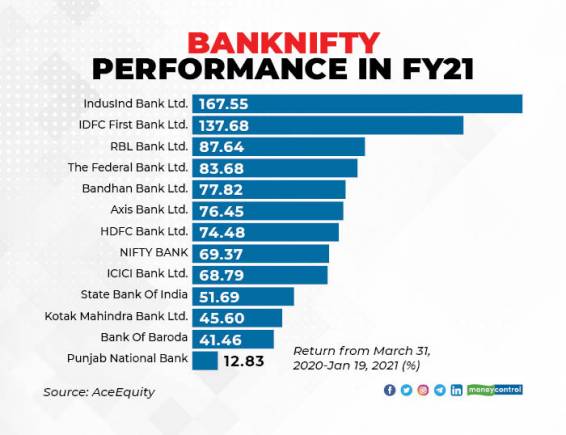 The risk, if any, to the financial sector is potential NPAs that can prop up from loans under moratorium.

“The risk of bad loans could be more from the MSME and retail side than the corporate side this time around. As per the RBI’s report, the stress for NBFCs could move up 50-200 bps as compared to 600-750 bps for banks,” says Oza of Kotak Securities.

“From Dalal street perspective, most investors prefer to invest in private sector banks and NBFCs as compared to PSU banks. In the case of private sector banks, the larger ones have been aggressive in providing for NPAs in advance, which can be seen from the rise in provision coverage ratios of the last two quarters,” he said.

Data suggests that few of the large banks have raised big capital and strengthened their balance sheets. Llarge private sector banks would be in a better position to handle any slippages and higher NPAs, experts said.

“The banking sector is expected to trade in the range in the first half of 2021. Stock-picking is the idea which I am looking forward too,” said Shahi of Findoc.

“Banks with a focus on retail loans can outperform the sector and most importantly, avoid PSU banks even if you find them cheap on the valuation front,” he said.

How are valuations looking?

Despite the recent rally seen, there are plenty of opportunities within the private sector banks, which are adequately provided and have sufficient capital adequacy, experts said.

“Banks with a focus towards retail lending with exposure to growing segments with lower portfolio risks like gold loans and housing finance are likely to grow in the coming times,” Vinit Bolinjkar, Head of Research, Ventura Securities, told Moneycontrol.

Explaining the data, Bolinjkar said valuations had almost reached pre-COVID levels, whereas many sectors are still struggling with recovery. This shows that the banks have been overvalued amid the uncertainty around asset quality and restructuring

Tags
analystsbankingBettingconcernFinancialReportstabilitystocksthese
Previous Post « Stretched valuations for most high-quality growth stocks is the big risk today: Raghvendra Nath of Ladderup
Next Post » After The Bell: D-St takes a U-turn after hitting 50k; what should investors do on Friday?

Solara Active: Aurore deal to act as a booster for CRAMS; accumulate

Questor: we’ve made an 11pc loss on GlaxoSmithKline. Here’s why we’re sticking with it

The Moneyist: My husband signed for a car for a friend — against my wishes. Now we get notices for unpaid tolls and parking tickets. What if there’s an accident?