A historic week for Indian markets where the S&P BSE Sensex inched closer towards 50,000 while the Nifty50 climbed 14,600, but profit booking at higher levels towards the close of the week dampened the bullish sentiment.

Despite profit-taking on January 15, the S&P BSE Sensex closed the week with gains of 0.5 percent while the Nifty50 was up 0.6 percent for the week ended January 15 but the bigger cut was seen in the S&P BSE Midcap, and Smallcap index which were down more than 1.2 percent each in the same period.

However, there are as many as 32 stocks in the S&P BSE Smallcap index which bucked the trend and rose 10-30% in a week that include names like Majesco, Orchid Pharma, Tata Metaliks, Indosolar, IFB Industries etc. among others.

Experts feel that profit booking could extend in the small & midcap space in the run-up to the main event – i.e. Budget 2021 as money will move from broader markets to defensives.

“We expect high beta stock like most small and midcaps to witness correction as the liquidity is likely to shift towards the blue-chip/large-cap and other defensive segments before the event,” Ashis Biswas, Head of Technical Research at CapitalVia Global Research Limited told Moneycontrol. 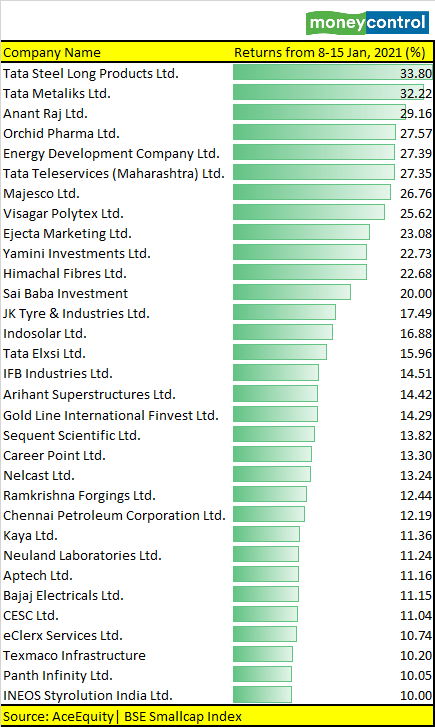 The S&P BSE Sensex hit a record high of 49,795 while the Nifty50 hit an intraday high of 14653 in the week gone by. Experts are of the view that bouts of profit booking are a common phenomenon in a bull market.

As long as Nifty50 holds 14000, bulls could still remain in control and move higher towards 15000. However, till Budget the trend could remain rangebound, suggest experts.

“We expect the coming week to be volatile and remain in a range between the Nifty50 levels of 14250 to 14650. We don’t expect the market to hit Sensex/Nifty 50,000/15000 respectively ahead of the event,” said Biswas of CapitalVia Global Research Limited.

“We expect the market to pick up momentum post the big event taking direction from the reform plan as roll out by the government, and in mid-February 2021, we may see the market hit the Sensex/Nifty 50,000/15,000 level,” he said.

The Nifty50 after hitting a target of 14600 saw profit booking amid overbought condition of the weekly stochastic oscillator (currently placed at 93). The weekly price action formed a Doji-like candle, indicating a temporary breather after the past three weeks’ 12 percent up move (13131-14653).

The bouts of profit booking after a sharp rally is a common phenomenon in the bull market. Therefore, a brief consolidation from here on cannot be ruled out, suggest experts.

“Nifty could consolidate in the near term, but we do not expect the index to breach the key support threshold of 14000-13800. Thus, any extended breather from here on should not be construed as negative instead it should be capitalised as an incremental buying opportunity,” Dharmesh Shah, Head – Technical, ICICI direct told Moneycontrol.

“We believe, ongoing temporary breather would make market healthy by cooling off the weekly stochastic oscillator (currently placed at 93) and pave the way for next leg of up move towards 14900 by the end of January 2021. In the process, stock specific activity would continue as we enter the Q3FY21 result season,” he said.

Any correction in TCS will be a buying opportunity, says Vinod Nair of Geojit