As European governments struggle to contain the fallout of soaring energy costs to their citizens, the U.S. may also be facing a brewing crisis with an estimated 20 million households struggling to pay their utility bills.

Representing one in six households, the eye-popping number comes from a study at the National Energy Assistance Directors Association (Neada) that was highlighted in a Bloomberg report earlier this week. The total amount in arrears amounted to $ 16 billion in June, just under the highest number so far this year — $ 16.5 billion in March.

“So before the pandemic, it was about $ 8 billion…and then the number doubled,” the author of that study, Neada’s executive director Mark Wolfe, told MarketWatch on Thursday.

Those 20 million households — largely low-income — can be anywhere from 30 to 90 days in arrears on utility payments, said Wolfe, who has been tracking the data for about 10 years.

Jean Su, a senior attorney at the Center for Biological Diversity, which tracks utility disconnections across the U.S. told Bloomberg that she expects a “tsunami of shutoffs.” 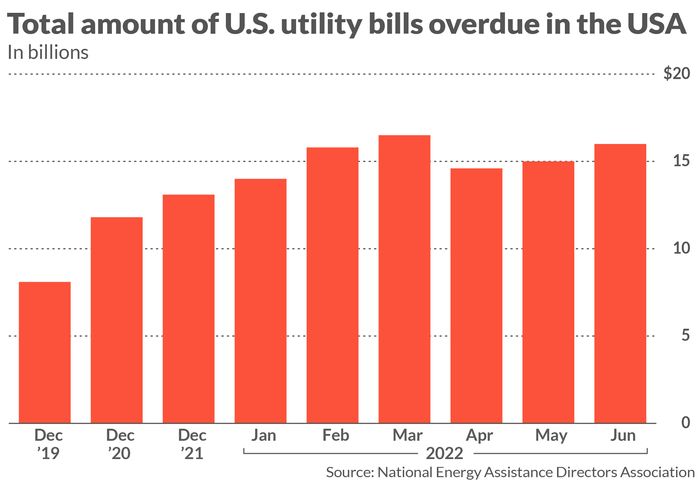 Rising energy prices are a primary factor behind this increase in utility debt, Wolfe said. In the past 12 months, consumer prices for electricity have climbed 15.2%, and natural gas prices have soared 30.5%, according to the U.S. Bureau of Labor Statistics.

“If current trends continue, the cost could reach about $ 3,385 this year,” he said, in additional comments by email. “On top of that, families are struggling with high rates of inflation for other essential goods like gasoline, food and rent.”

The rise in the cost of living was at a 40-year-high at 8.5% in July compared to the year before. Grocery prices continued to soar — the price increase was 13.1% compared to the same period last year. Many Americans reported they have already dipped into savings to pay for bills and bought smaller package sizes and cheaper alternatives to cut down on costs.

Because of the rising costs, lower-income Americans are already struggling to pay back credit-card loans and purchase big-ticket items like automobiles, Radha Seshagiri told MarketWatch previously. Seshagiri is the public policy and system change director at SaverLife, a nonprofit that helps families with low and moderate incomes to save money.

Residents living in rural areas were seeing even bigger impacts of inflation and the recent rise in energy costs, according to a report by Iowa State University professor Dave Peters, which studied the impact of inflation in small towns.

“The biggest inflationary impact on rural households has been the increased cost of transportation, which is essential in rural areas where residents have to drive longer distances to work, school, or to shop for daily needs.” Peters wrote in the report.

Rural people are paying $ 2,470 per year more for gasoline and diesel fuels than they did two years ago, while urban dwellers are paying $ 2,057 more, according to the report.

The number of families falling behind on utility payments shot up during the pandemic as households struggled with shutdowns and loss of income, though moratoriums prevented the lights, etc. from being shut off, said Wolfe.

More would have fallen behind worse without the $ 45 billion in rental assistance Congress approved in 2021, along with child tax credit assistance, he said.

Through the American Rescue Plan Act, lawmakers increased the child tax credit to a maximum total of $ 3,600 for children under age 6 and $ 3,000 for kids between the age of 6 and 17.  Families who were eligible for enhanced CTC received advance monthly payments of up to $ 300 per child under age 6 and up to $ 250 per child between age 6 and 17

Many parents in lower-income households said they were doing a lot better financially last year because of the expanded child tax credits. The share of Americans who said they were able to cover $ 400 in emergency expenses, using cash or its equivalents, reached a 9-year-high, according to a Federal Reserve report, based on the annual national Survey of Household Economics and Decisionmaking (SHED) that was conducted last fall.

But with those benefits now gone, households are facing other issues without any help, Wolfe said. Rising U.S. interest rates may only exacerbate problems with costs of everything from rent to food, and low-income families are often the first to feel the pain.

“Utility arrears can be viewed as an economic indicator, they are very sensitive to changes of the economy and people in the bottom 40% of the population fall behind on these bills when the economy trends down,” said Wolfe.

Wolfe said that 20 million number — out of a total 123.6 million households in the U.S. — doesn’t seem to get enough attention, but 32 million households are eligible for energy assistance. For families not paying those bills, it means possibly losing their leases — “the first step to eviction,” he said, adding that he suspects some small businesses may also be behind on their utilities.

“Energy is one of the essential goods to pay rent,” said Wolfe. “Eventually I’ll threaten to shut you off unless you pay and that work most of the time. But we’re in a new paradigm, a new world now where you’re a low income family, you fell behind on your bills in the winter, not too surprising.”

“But now I’ll put you on a repayment plan where the plan to pay this off by next October, except now the cost of cooling is much higher. So your ability to pay that off is more challenging than the other thing,” he said.

Read: ‘We are drowning in debt’: Black and brown mothers grapple with more obstacles balancing child care and bills as they return to work

Key Words: Goldman Sachs CEO sees a ‘30% chance of recession’ within the next 12 to 24 months

Deep Dive: Want to get in on hot energy stocks? Wall Street favors these 20 picks for gains up to 40%