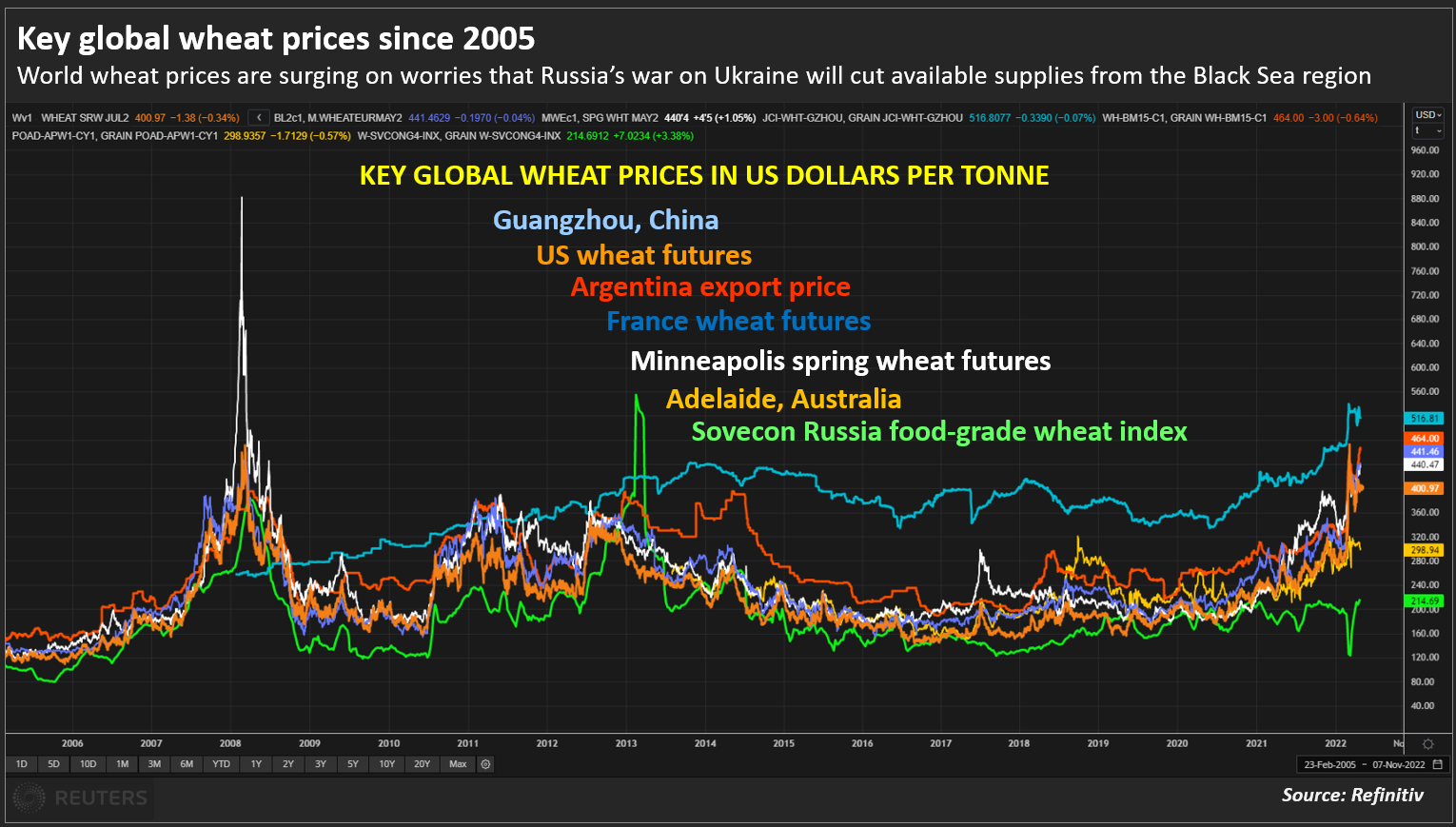 For the first season in over a decade, Indian farmer Rajensingh Pawar is selling his new wheat crop to private traders instead of the state stockpiler, as a global wheat price rally gives India’s suppliers a rare profitable export window.

Strong demand following Russia’s invasion of Ukraine means growers are receiving the highest prices ever for their crops, while also easing pressure on the state’s grain procurement agency which racks up huge debts as a buyer of last resort.

The boom times have come as Pawar and his peers harvest a record Indian wheat crop, giving growers a rare opportunity to sell the grain just as global prices hold near all-time highs.

“After a long time, traders are ready to pay more than the MSP,” Pawar, 55, said, referring to the minimum support price at which the Food Corporation of India (FCI) buys grain from farmers.

“India’s rising wheat exports have helped farmers like us who are getting a far better return,” he said, as he unloaded wheat at a grain market in Madhya Pradesh state, known for its top-quality wheat.

Before the nearly 50 percent surge in global wheat prices, India struggled to export the grain due to annual increases in the MSP to placate the politically powerful farm lobby that made Indian wheat more expensive than world prices.But a rare confluence of high international prices, consecutive record crops, a weaker rupee against the dollar and improved internal logistics have made shipments from India attractive.

“This is a golden opportunity for India to export its surpluses,” said Nitin Gupta, a vice president at food and agri-business Olam Agro India.

For international wheat markets, India’s sales are helping offset a supply shortfall resulting from Ukraine-driven disruptions in the Black Sea region, crop cuts in Canada and quality downgrades in Australia.

For Indian authorities, brisk demand from private grain handlers at prices above the MSP of 20,150 rupees ($ 262.88) a tonne means FCI’s wheat purchases are expected to fall drastically for the first time in decades.

This year’s FCI purchases could fall below 30 million tonnes, trade and government officials said, meaning less government capital will be tied up buying and storing crops.

Indian traders have signed wheat export deals at between $ 330 and $ 335 a tonne free on board, said Rajesh Paharia Jain, a New Delhi-based trader. This is nearly $ 50 a tonne cheaper than rival suppliers as the rally in global prices and large surplus stocks at home have made it easier for Indian suppliers to offer a discount, but still well above local prices. 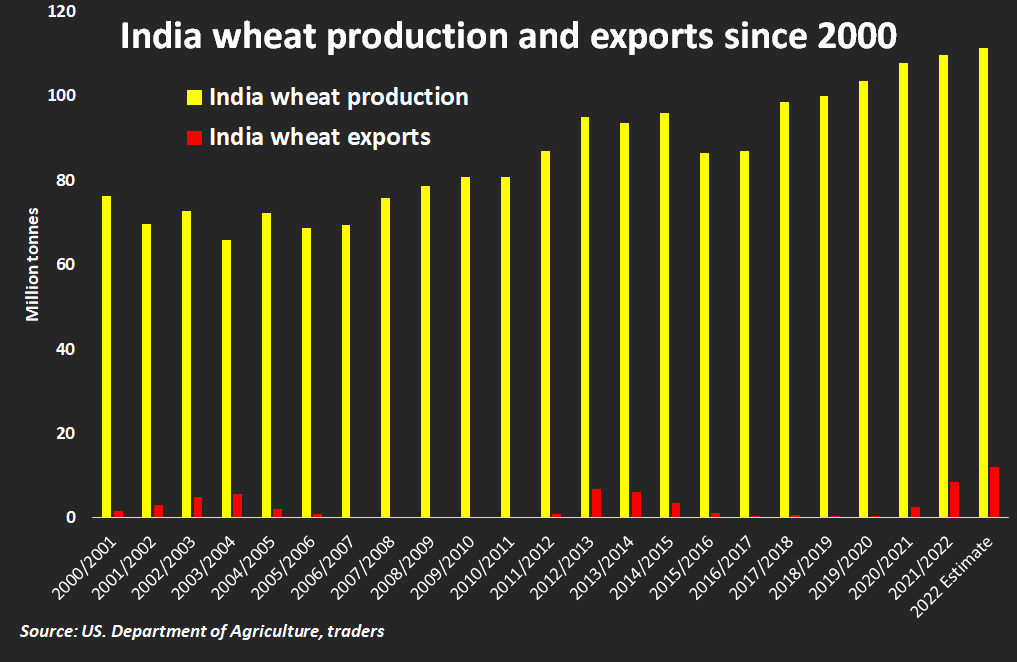 Following a flurry of export deals signed in February and March, India’s wheat shipments touched a record 7.85 million tonnes in the fiscal year to March – up 275 percent from the previous year.

Exports could jump to 12 million tonnes in the 2022-23 fiscal year, traders said, making it a serious player in global markets.

India’s exports have also been helped by a sharp jump in crop quality. Previously limited to cost-sensitive markets that accepted lower quality product, exporters have recently made sales to some of the world’s most discerning wheat consumers.

For the first time, top global wheat importer Egypt has purchased the grain from India, which sources say has helped India establish a reputation as a top tier supplier.

Rapid and widespread adoption of higher quality seeds has underpinned the quality climb. Introduced over the past decade, the top 10 wheat seed varieties accounted for more than 70 percent of the roughly 31.5 million hectares planted with wheat last season, said Gyanendra Pratap Singh, chief of the Indian Institute of Wheat and Barley Research.

“Earlier, India was not known for its quality wheat, but India’s wheat is now as good as any high-quality wheat from other major global suppliers, and that’s because of new seed varieties,” Singh said.

Alongside improved farm practises and greater mechanisation, better seeds have transformed India’s wheat market from mainly low-quality feed varieties to one abundant in superior grades such as Durum, Lokwan and Sharbati used in pizza, pasta and premium bakery products.

Lauding farmers and scientists for helping India emerge as a new force in wheat markets, Sudhanshu Pandey, the top official at the food ministry, said the government was determined to help India become a regular exporter of high-quality wheat.

The only impediment to that rosy outlook could be a drop in crop yields this year due to a sudden rise in temperatures in mid-March, traders said.

The government has forecast this year’s wheat output at a record 111.32 million tonnes, but may revise that estimate if the recent hot spell saps crops still trickling into wholesale grain markets.

In the grains market of Madhya Pradesh, farmers are jubilant about exports.

“Prompt payments and higher prices for better grades of wheat are something of a rarity for us,” farmer Narendra Pariyar said. “The wheat export boom has truly been a gold mine for farmers.”