The Federal Reserve Bank of New York on Thursday released new analyses on student loans, with one blog post focused on who would benefit from various approaches to canceling such debt — as well as each approach’s cost.

Forgiving a maximum of $ 50,000 per borrower would cost $ 904 billion and would forgive the full balance for 79% of the 37.9 million federal borrowers, with an average amount cancelled of about $ 24,000, says the New York Fed post, which is titled “Who Are the Federal Student Loan Borrowers and Who Benefits from Forgiveness?“

Adding a household income limit of $ 75,000 would cut the total cost of a $ 50,000 forgiveness policy to $ 507 billion, according to the regional Fed bank’s researchers. And having that same income limit but forgiving a max of $ 10,000 per borrower would cost $ 182 billion.

Besides costing less, smaller student-loan forgiveness policies would distribute a larger share of benefits to borrowers with lower credit scores and to those that live in less wealthy and majority minority neighborhoods, the post’s authors found.

Blanket student-loan forgiveness policies would benefit many borrowers who are unlikely to struggle paying back their loans.

Means-testing, on the other hand, would “more directly target forgiveness to borrowers facing a greater struggle with repayment, which would result in a significantly less regressive policy,” the post says.

For example, under a $ 10,000 policy, an income cap raises the share of forgiven loan dollars going to borrowers in low-income neighborhoods from 25% to 35% and the share going to lower credit score borrowers from 37% to 42%.

The effect related to low-income neighborhoods is shown in the chart below. 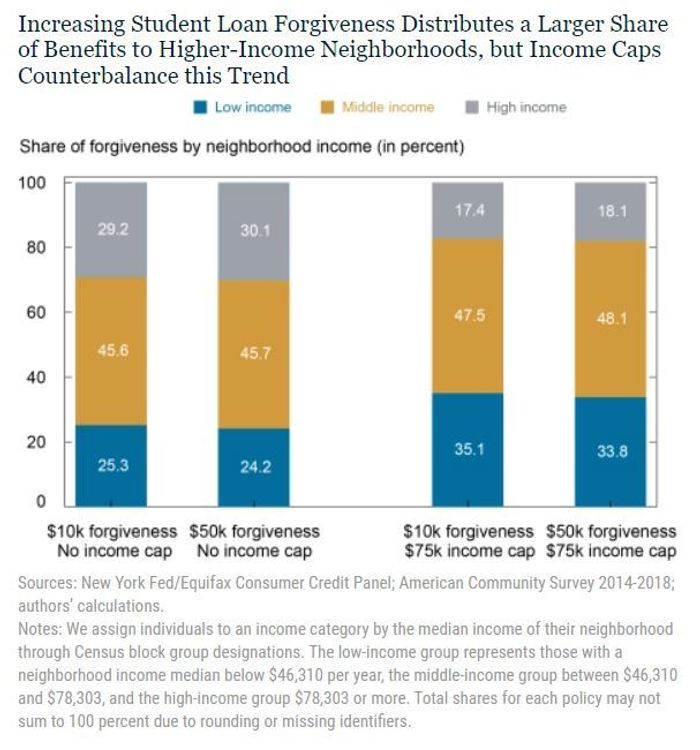 The analyses from the regional branch of the U.S. central bank come after the White House in mid-April said it will extend its pause for student-loan repayments again before Aug. 31 — or finalize a plan by then on canceling student debt. Analysts have cast the pauses as a midterm-elections gambit.

In addition, the Biden administration last week announced a new review of its student-debt portfolio, saying it will correct for past mistakes that denied 3.6 million borrowers credit toward loan forgiveness and will cancel debt immediately for about 40,000 borrowers.

The total outstanding balance for federally-owned student loans stood at $ 1.38 trillion as of December, according to the New York Fed researchers.

: A big tax on a Big Mac? Some say it’s time to consider meat taxes to reduce beef consumption and help the environment

: Senate members say tech regulation is among their agenda items in 2022: CES