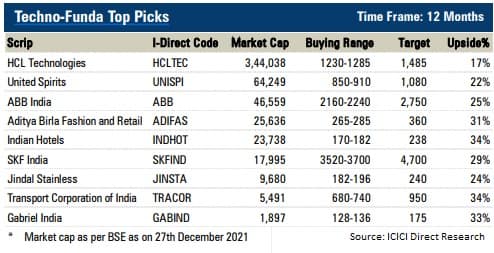 The market delivered bumper returns in the calendar year 2021, with the BSE Sensex and the Nifty50 rising more than 20 percent, the highest yearly return in percentage terms since 2017. In fact, it was the second year of recovery and created fresh records after COVID-led lockdowns that hammered the market sentiment and dragged nearly 40 percent from its previous record high of 12,430 in January 2020.

If we look at it from a multi-year low touched on March 24, 2020, the Nifty50 has given a whopping 148 percent return which, experts feel, largely indicates that we are in a multi-year bull run that started off a year ago.

There are several reasons behind the outstanding rally seen in the last more than 18 months, including easing of COVID-19 concerns, various measures taken by the government and the RBI to revive the economy, low interest rate environment, and ample of liquidity.

Experts are not worried about recent correction of more than 10 percent seen after more than 18 months of rally. It was a long-awaited correction due to a one-way rally.

Fundamentally, nothing has changed and India is a track to show strong economic as well as earnings growth in coming years, while technically, too, the Nifty50 is in a strong position and is expected to hit 21,000 mark in the coming year 2022, experts feel.

“Going by the history of three decades, we expect the ongoing bull market to extend for the next few years with multi-fold gains. Our Nifty target for CY22 is 21,000 based on classical chart reading and bottom-up prognosis of Nifty constituents, wherein strong support exists at the 15,500 zone,” said ICICI Direct in its latest report. 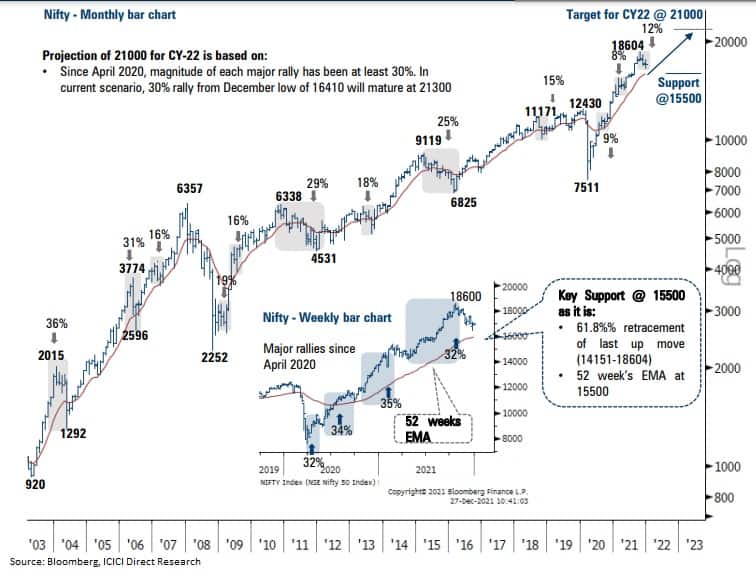 “In a secular bull market, secondary correction is a common phenomenon. Over the past two mega phases spanning two decades, an average transitory correction has been to the tune of 14 percent. Investing in such corrections and ignoring noise has been rewarding,” said ICICI Direct.

“At current juncture, as an 11 percent correction is behind us (from life high of 18,600) investors should focus on building a quality portfolio in a staggered manner from a medium to long term perspective,” the brokerage said.

ICICI Direct said there have been three mega bull cycles in past 35 years or three decades, each preceded by minimum 40 percent correction and transitory breach of long term 200-week moving average, similar to CY20. 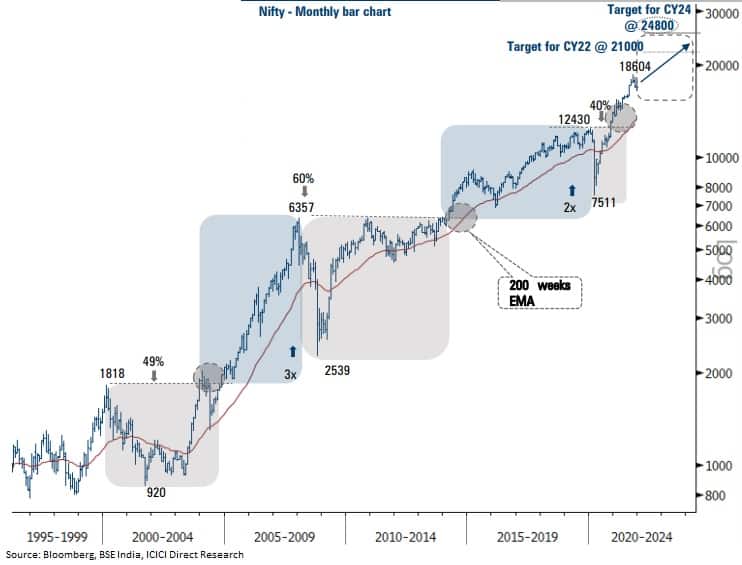 “As per the Dow theory, when the previous high is taken out, new major trend emerges. Taking cognisance of history, we expect the ongoing bull cycle from CY20 high of 12,400 to continue over the next few years with potential Nifty target of around 24,800 by CY24, and target for CY22 is 21,000 based on classical chart reading and bottom up prognosis of Nifty constituents, wherein strong support exists at the 15,500 zone,” ICICI Direct said.

In the 2018 outlook, the brokerage had focused on mega bull trend in Indian equities. It has set a target of at least 17,600 by CY22 that has been achieved.

In fact, the rally in Nifty50 surprised every expert in CY21 as it ran beyond everyone’s target.

According to ICICI Direct, Indian equities are expected to relatively outperform emerging markets as verified by multi-year breakout on relative charts. “Going by history, the US and Indian equities have continued their structural bull phases even in times of interest rate hikes in US starting 1993, 2004, 2015.”

MSCI India relative to MSCI EM has registered a breakout above a five-year range highlighting strength in the Indian market over other emerging market peers. A similar range breakout in CY04 and CY12 saw outperformance by MSCI India in the next couple of years.

The broader markets outperformed the frontline indices in CY21 too. The Nifty Midcap 100 index gained 21 percent and 43 percent in CY20 and CY21, against 14 percent and 22 percent rally on the Nifty50.

The mid-cap space is expected to extend its outperformance in coming years, said ICICI Direct, adding on the sectoral front, IT is expected to lead the rally supported by cyclicals like capital goods, BFSI, real estate and auto.

Trade Spotlight | What should you do with ICICI Prudential, Astral, Shree Renuka Sugars on Thursday?