Adding some insult to earnings injury, a horde of Wall Street analysts slashed their price targets on Peloton Interactive Inc.’s stock Friday, following the at-home fitness company’s disappointing quarterly report and the sudden and sharp cut of the revenue outlook.

But despite the lowered expectations for Peloton’s stock, most analysts stuck to their bullish view, as they believed the market leader’s troubles will eventually pass. 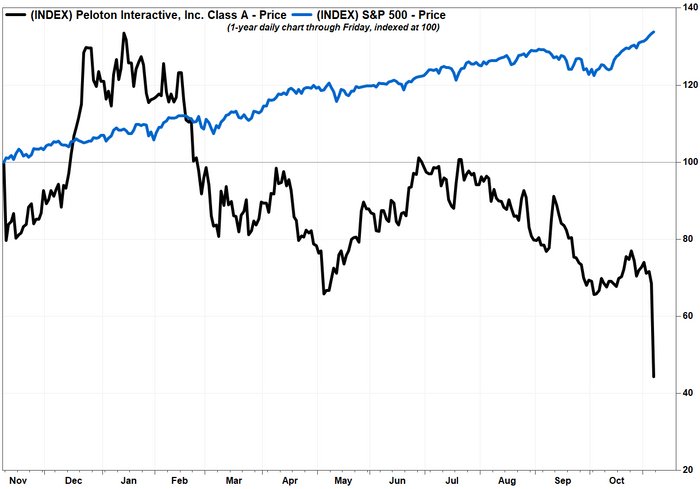 The company reported late Thursday a wider-than-expected fiscal first-quarter loss and revenue that rose 6.2% from a year ago to $ 805.2 million but missed forecast. The full-year revenue guidance range was lowered to $ 4.4 billion to $ 4.8 billion from the $ 5.4 billion estimate provided just three months ago.

Meanwhile, total operating expenses soared 139.6% to $ 622.4 million, with sales and marketing spend climbing 148.1% and research and development expense hiking up 166.9%.

Wedbush analyst James Hardiman cut his stock price target to $ 66 from $ 90, citing the “stunning” revenue guidance cut. His target is now about half what it was in mid-July, before he downgraded the stock to neutral from outperform and cut his price target to $ 115 from $ 130 on July 14.

“The fall from grace for [Peloton’s stock] in such a short period of time is fairly astonishing, and is the culmination of a difficult-to-stick landing following a once-in-a-century catalyst, uncontrollable external factors such as supply chain headwinds and a series of head-scratching unforced errors, the most recent of which being a whiplash-induced about-face on targets given barely two months ago,” Hardiman wrote in a note to clients.

Stifel Nicolaus analyst Scott Devitt downgraded Peloton to hold, after being bullish since the company went public two years ago, and chopped his price target down to $ 70 from $ 120, citing the “rapid deterioration” of the revenue outlook.

See also: A bunch of fitness companies have jumped into the IPO market this year. It’s not working out.

Devitt said Peloton’s previous full-year revenue guidance had given him confidence that the company could grow through the post-COVID reopening period, but that confidence has been shaken.

“Now, given the materially lower expectations, we expect it will take several quarters to determine a more normalized pace of growth, or more skeptically, whether or not the revised outlook is an indication that the core product may be closer to maturity in existing markets than previously thought,” Devitt wrote.

Devitt and Wedbush’s Hardiman were two of the no less than 20 of 31 analysts surveyed by FactSet who cut their price targets. The average target has been lowered by one-third, to $ 85.85 from $ 127.81 at the end of October, but the new target still implied 54% upside from current levels.

But Devitt and Hardiman were a minority, with 17 analysts having the equivalent of buy ratings on the stock. And of the analysts who cut their targets, 12 remained bullish.

Simeon Siegel of BMO Capital, one of just two Peloton bears, said the latest results and outlook suggest the post-pandemic surge has dissipated and reduced the company’s forecasting ability. He said that’s “ironic,” as most consumer companies are now cheering improved visibility. He reiterated his underperform rating and $ 45 stock price target.

“We worry lowered numbers remain too optimistic and that the biggest issues may actually lie ahead — in racing to meet pandemic-driven demand, the company embarked on a massive investment spree (Tonic, Precor, POP), dwindling cash and ballooning inventory just as demand tapered,” Siegel wrote.

Among the majority, Baird’s Jonathan Komp lowered his target to $ 90 from $ 160, but kept the outperform rating he’s had for the past two years, saying he sees value if the company’s troubles prove temporary.

Komp cut his estimates for the company out to 2023, but with the stock already down so much and the company transitioning to a “more balanced” growth model, he is “willing to stick around” to better gauge core holiday demand.

Jason Helfstein at Oppenheimer knocked his price target down to $ 85 from $ 140 but reiterated his two-year-old outperform rating, saying despite weaker Bike demand and the Tread “recall hangover,” Peloton is holding its leadership position in an emerging industry.

JPMorgan’s Doug Anmuth lowered his price target to $ 90 from $ 138, but maintained the bullish stance he’s had on Peloton since it went public, as the company is entering its “strongest seasonal period,” and is actively looking to manage costs.

He said although Tread is off to a slower-than-expected start, “it remains early” and sales have picked up since the company started marketing the product about 30 days ago.

: ‘We thought of ourselves as legitimately trying to do good.’ SBF says he cares most about helping humanity as he tries to explain FTX collapse