The global tally of COVID-19 cases neared 172 million on Thursday, and the number of vaccines administered edged above 2 billion, a day after a summit ended with pledges of $ 2.4 billion to the Covax program that aims to secure vaccine supply for the world’s poorest countries.

The funds raised at the summit, which was hosted by Japan and the Gavi Vaccine Alliance, and administers the World Health Organization’s Covax program, will allow it to purchase 1.8 billion vaccine doses that are expected to be delivered in 2021 and 2022, Gavi said in a statement. That’s enough to protect 20% of adults in lower-income nations.

The Gavi alliance has now drawn pledges totaling $ 9.6 billion. Importantly, commitments were also made to freeing up supply chains and removing bottlenecks that are hampering the distribution of vaccines, raw materials and components.

“Thanks to all our donors, we can now protect not only health care workers, the elderly and other vulnerable people but broader sections of the population, increasing our chances further of bringing the pandemic under control,” said José Manuel Barroso, chair of the Gavi board.

“Bringing an end to the COVID-19 pandemic is the most pressing challenge of our time – and nobody wins the race until everyone wins,” said Dr. Seth Berkley, CEO of Gavi. Experts continue to warn that allowing variants to continue to spread overseas is a risk as one could develop that proves resistant to the current vaccines and undermine the entire global effort.

President Joe Biden said the U.S. will play its part too, as he announced a strategy for vaccine sharing that will prioritize Covax, and getting doses to neighboring countries, including Latin America and the Caribbean, South and Southeast Asia, and Africa, in coordination with the African Union.

The U.S. will donate 75% of the first 80 million doses is plans to donate to Covax, Biden said in a statement. The remaining 25% will go directly to countries in need, those currently experiencing surges in cases, immediate neighbors and other countries that have requested help.

“The allocation of this first tranche of donated doses reflects the desire of the United States to respond to all regions and lay the ground for increased supply and access throughout the world,” said the statement.

The world has now administered 2 billion vaccine doses, according to data aggregated by Johns Hopkins University. But the world will need at least 11 billion doses to inoculate 70% of its population, the New York Times reported recently, citing researchers from Duke University.

The U.S. has now fully vaccinated 136 million people, equal to 41% of its population, according to the Centers for Disease Control and Prevention’s vaccine tracker. That means they have received two shots of the two-dose vaccines developed by Pfizer Inc. PFE, +0.10% and German partner BioNTech SE BNTX, -1.60% and Moderna Inc. MRNA, +2.87%, or one shot of the Johnson & Johnson JNJ, -0.07% one-shot vaccine. The AstraZeneca AZN, -0.22% AZN, +0.20% vaccine has not been authorized for use in the U.S. 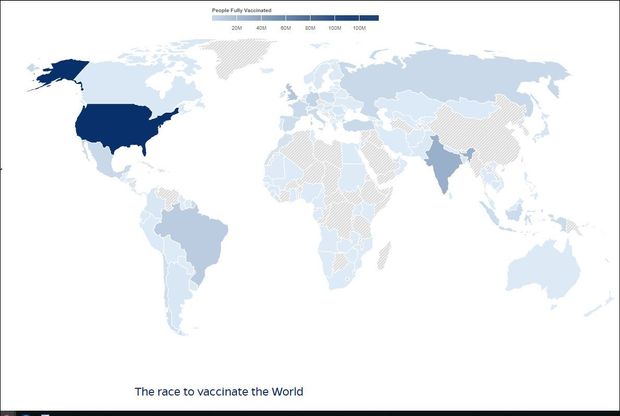 Israel has the most vaccinated population with nearly six in 10 people fully inoculated, according to an AFP tally. That’s followed by Canada, with 59% of the population receiving at least one dose, the U.K. at 58.3% and Chile at 56.6%.

There are still a number of countries that have not received a single vaccine, according to AFP; they are North Korea, Haiti, Tanzania, Chad, Burundi and Eritrea.

See also: Will we need COVID-19 booster shots? Increasingly, the expectation is yes

• Italy has started to offer COVID-19 vaccines to everyone over 12 years of age, AFP reported. After a slow start at the beginning of the year, both due to organizational issues and lack of supply, Italy’s vaccination program has been rapidly gaining pace. More than 35 million doses have been administered, with 12.4 million people — almost 23 percent of the population — now fully vaccinated, according to health ministry figures. Hailing the widening of the vaccination program, Health Minister Robert Speranza said: “We can still accelerate our campaign to get through this difficult season.”

• About 10,000 out of 80,000 registered volunteers to help with the Tokyo 2020 Olympics have dropped out in recent weeks amid widespread fears of coronavirus infection, CNN reported. Toshiro Muto, chief executive of the Organizing Committee, told Japanese media he does not believe the volunteer withdrawals will impact the operation of the Games, which were postponed last year due to the pandemic. The rescheduled event is due to start on July 23. Volunteers are an instrumental part of the Summer Olympics. They help staff operate Olympic facilities and venues, and assist spectators and athletes. So if more continue to drop out, it could pose additional difficulties for organizers.

• Bulgaria is planning to share COVID-19 vaccines with its Balkan neighbors, the Guardian reported. The country of about 7 million will provide about 150,000 vaccines to neighbors and said it has received requests from North Macedonia, Albania, Kosovo and Bosnia. Bulgaria has the lowest inoculation rates in the European Union, but Health Minister Stoicho Katsarov said the country will receive about 13 million doses under the EU supply scheme by the end of the year and can afford to help other countries. Separately, Greece said it would supply Albania and North Macedonia with 40,000 doses.

• President Joe Biden unveiled a plan to get 70% of Americans at least one COVID-19 vaccine shot before the July 4 holiday, during a speech Wednesday, MarketWatch’s Chris Matthews reported. “Today we’re announcing a month-long effort to pull out all the stops to free ourselves from this virus,” the president said. “It’s going to take everyone: the federal government, the state governments and local, tribal, and territorial governments, the private sector and, most importantly, the American people to get to this 70% mark so we can declare independence from COVID-19.” The plan includes recruiting private businesses to offer incentives to get vaccinated, including a tax credit to cover the cost of providing paid time off for Americans to get the vaccine.

• The new White House science adviser wants to have a vaccine ready to fight the next pandemic in just about 100 days after recognizing a potential viral outbreak, the Associated Press reported. In his first interview after being sworn in Wednesday, Eric Lander painted a rosy near future where a renewed American emphasis on science not only better prepares the world for the next pandemic with plug-and-play vaccines, but also changes how medicine fights disease and treats patients, curbs climate change and further explores space. “This is a moment in so many ways, not just health, that we can rethink fundamental assumptions about what’s possible and that’s true of climate and energy and many areas,” Lander told the AP.

Don’t miss: Here’s what employers are NOT allowed to do to entice workers to get COVID-19 vaccinations

The global tally for the coronavirus-borne illness climbed to 171.7 million on Thursday, while the death toll rose to 3.69 million, the Johns Hopkins data shows.

The U.S. remained in the lead globally in cases with 33.3 million and deaths with 595,849, JHU data show. But the seven-day average for cases has fallen 46% from two weeks ago, according to a New York Times tracker, for deaths has dropped 35% and for hospitalizations has declined 22% as vaccinations continue to increase.

India is second in cases at 28.4 million, and third by fatalities at 337,989, numbers that are held to be vastly undercounted given a shortage of tests.

China, where the virus was first discovered late in 2019, has had 103,069 confirmed cases and 4,846 deaths, according to its official numbers, which are widely held to be massively underreported.

Coronavirus cases are falling fast and so are the number of Americans losing jobs. New applications for regular unemployment benefits fell below 400,000 in late May for the first time during the coronavirus pandemic, MarketWatch’s Jeffry Bartash reported.

Economists surveyed by Dow Jones and The Wall Street Journal had forecast new claims would slip to a seasonally adjusted 393,000.

The number of people applying for benefits has fallen by more than half since January to coincide with a surge in vaccinations and a steep decline in coronavirus cases.

New unemployment claims are still almost twice as high as they were before the pandemic, however. New applications had been running in the low 200,000s before the viral outbreak in early 2020.

Read: Why aren’t Americans happier about the economy? They are paying higher prices for almost everything

U.S. private-sector employment surged by 978,000 in May, according to the ADP National Economic Report released Thursday. The gain was well above forecasts from economists surveyed by the Wall Street Journal who expected a gain of 680,000 jobs.

It is the largest gain since last June when the economy began to reopen after the first wave of the coronavirus pandemic. The private-sector added a revised 654,000 in April, down from the prior estimate of 742,000.

Economists expect a rebound in the Labor Department’s May nonfarm payrolls, due Friday, after a surprisingly subdued 266,000 gain in April on a seasonally adjusted basis.

The Federal Reserve’s Beige Book reported Thursday that businesses are adding to their payrolls at a steady pace in May.

Separately, the productivity of American workers rose at a 5.4% annual pace in the first quarter, reflecting a big increase in output as companies ramped up operations to keep up with an accelerating U.S. recovery.

The increase in productivity was unchanged from its original estimate of 5.4%.

Output, or the amount of goods and services produced, climbed at a 8.6% annual pace in the first three months of the year, the government said Thursday. That was little changed from the initial reading.

Productivity is determined by the difference between output and hours worked.

Read: Hiring signs are everywhere, but Wall Street isn’t betting on huge job gains in May

NerdWallet: What to do when your digital assets take a dive

The Big Move: ‘It feels like I’m holding two full-time jobs:’ I’m 65, retired and have a $2,000 pension. I own rental properties, but they’re stressful to maintain. Should I keep them or sell?

: Black people were being prescribed opioids as much as whites during the drug crisis — but media coverage told a different story