Wall Street’s graveyard is filled with the failed predictions of eminent analysts who predicted that corporate margins couldn’t remain so high for so long. In 1999, for example, none other than Warren Buffett of Berkshire Hathaway said that “you have to be wildly optimistic” to believe that corporate profit margins would stay above average for “any sustained period.” GMO’s Jeremy Grantham called profit margins “the most mean-reverting series in finance.”

You can see what Grantham was referring to in the chart below. Prior to the last couple of decades, profit margins rising to above-average levels was the precursor to a decline to well-below-average levels of 7% or below. But this hasn’t happened since the internet bubble. The profit margin at the bottom of the Great Financial Crisis got close (7.8% in 2008), but quickly jumped back. 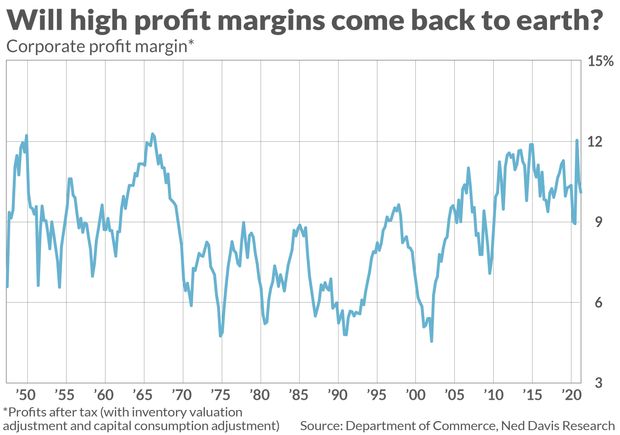 Joseph Kalish, chief global macro strategist at Ned Davis Research, contends that a perfect storm is brewing that could put “profit margins… under attack from all sides.” In an interview, Kalish speculated that the profit margin could decline significantly over the next couple of years — perhaps by enough to once again break below that 7% level.

If his prediction is right, then the U.S. stock market will almost certainly produce disappointing returns in coming years. That’s because corporate profits would be falling even as the economy is strong.

To illustrate, consider the following back of the envelope calculation. Let’s generously assume that corporate revenue will grow over the next four years at the same pace it did for the decade through year-end 2019. I picked that decade because it doesn’t include the coronavirus pandemic. Let’s also assume that the stock market’s price/earnings ratio stays constant, which is also an extremely generous assumption because it currently is higher than 94% of the time since 1970. Let’s keep other factors constant, such as dividend payout rates, share buybacks, and share issuance.

Kalish identifies a number of factors that could conspire to cause profit margins to decline, including:

To be sure, Kalish said, several potentially countervailing forces could mitigate the downward pressure on profit margins. Labor costs would not rise as much as they would otherwise if productivity or labor-force participation were to increase, for example. Still, the odds don’t look good. Kalish says he “can’t recall a time when so many components were at risk” of causing profit margins to tighten.

More: Stocks to buy and those to avoid as U.S. economy runs faster than the Indy 500

Also read: Bitcoin and bonds won’t cut it. Buy these 6 types of assets for protection in a bear market, says strategist.