Dispatches from a Pandemic: ‘Life turns on a dime’: She donated $950 from her first stimulus check to a food bank — then received a cancer diagnosis

Almost exactly a year ago, Toi Cudworth looked around and realized she was one of the lucky ones.

The San Antonio, Texas resident had a job and a freezer full of food. But just a few miles from her home, thousands of cars lined up before dawn in a flea market parking lot to receive handouts of free groceries.

So when the first stimulus check hit her bank account, Cudworth sent $ 950 — more than one month’s rent on her apartment — of her $ 1,200 payment to the San Antonio Food Bank. She included a note: “This is my stimulus check and while I could make use of it, there are those that need it more!”

But life can change fast. As the sudden economic upheaval of 2020 demonstrated, the line between the people with enough cash to help others and the people who need help can be razor thin. Sometimes all it takes is a phone call to nudge someone across that line, which is what happened to Cudworth when a doctor phoned last fall and delivered the news that she had breast cancer.

“ The line between the people with cash to help others and those in need can be razor thin. Toi Cudworth crossed that line. ”

A year after her $ 950 donation, she doesn’t regret giving the stimulus money away, but she sure could use it now.

Since her cancer diagnosis, she’s been “hoarding every dime,” she told MarketWatch, delaying payments on some loans and buying frozen chicken and veggies because they’re cheaper and they last longer.

She’s paid about $ 6,000 so far out-of-pocket for cancer treatment, and she owes at least another $ 4,500. Medical bills continue to trickle in, and she still has another surgery ahead of her. She chips away at the bills by making $ 5 and $ 10 payments at a time.

“I tell you what, life turns on a dime — just be so grateful for what you have,” Cudworth said. “One minute you’re sailing on the high seas, having a good old time.”

And the next? She found herself half-dressed, with IVs stuck in her arm and markings on her chest, about to go into surgery as a hospital worker asked permission to give her an X-ray that she wasn’t sure she could afford.

Stimulus money has been a buffer for many

Over the past 12 months, Cudworth dodged many of the pandemic-related money struggles that others faced, but she still fell victim to some of the perennial problems Americans encountered before the pandemic, and will continue to deal with afterward.

They include out-of-the-blue medical bills, expensive cancer treatment; spotty insurance, and the vagaries of dealing with big companies that control our financial lives. Her story is a reminder that, even without a pandemic, many in the U.S. live close to the financial edge.

For Cudworth and millions of others, stimulus money has provided a measurable buffer against financial blows.

“ For Cudworth and millions of others, stimulus money has provided a measurable buffer against financial blows. ”

A recent report from the liberal-leaning Urban Institute think tank found that despite record job loss last year, the share of U.S. adults who said they didn’t have enough food to eat or couldn’t pay utility or medical bills on time actually declined in 2020 compared to 2019 — a mark, researchers said, of the impact of stimulus payments and other government safety net programs.

“However, this average change obscures the substantial hardships among families who lost work during the pandemic,” the researchers wrote.

Indeed, Cudworth’s biggest stroke of luck over the past year has probably been that she’s kept her job. A senior teller at a credit union, she makes less than $ 40,000 a year.

Single, with no children, she not only donated most of her first stimulus check to the food bank, she also bought groceries for a young neighbor who had been laid off from his retail job. She also slipped “a few bills” to a nearby older couple, and spent some of the rest on dog treats for her two rescue chihuahuas.

A year later, she’s not sure what became of the younger neighbor; he moved out when he couldn’t afford the rent. She has barely seen the older couple. She had to put one of her two dogs to sleep about a month after receiving her first stimulus check, resulting in a $ 1,200 vet bill. 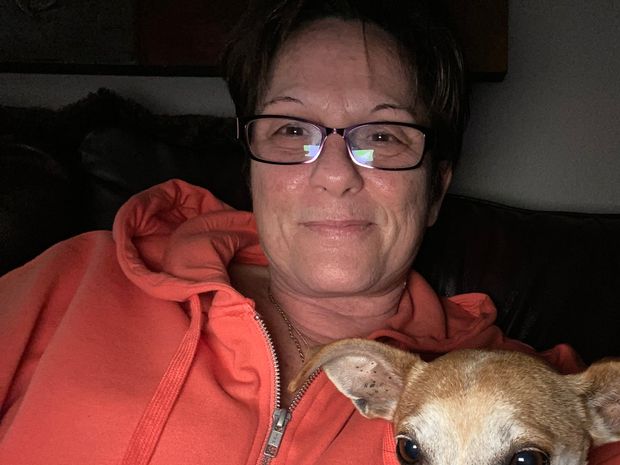 Toi Cudworth says she’s been counting her pennies to make sure she can cover cancer treatment bills.

A few months later, Cudworth went to the doctor because she was feeling pain and numbness in her chest. She thought it was some kind of injury.

After some tests, her doctor called on Nov. 6, her birthday, to tell her she had invasive ductal carcinoma, the most common type of breast cancer.

Right away, Cudworth’s thoughts turned to medical bills. “I’m thinking, ‘What am I going to do?’” she remembers.

Given the choice between a lumpectomy and a double mastectomy, she went with the more expensive full mastectomy, remembering two friends who had each faced that same decision. The one who had the lumpectomy had a recurrence and died, the other is still alive.

A stimulus check that went missing

Meanwhile, the federal government sent out a second round of stimulus payments in December, but Cudworth didn’t receive one.

She’s a TurboTax INTU, -3.34% user and thinks her second stimulus payment was waylaid by the same technical glitch that delayed millions of other TurboTax users’ checks.

The company has said it resolved the issue that was delaying stimulus payments, and a press representative offered to look into Cudworth’s missing check when MarketWatch contacted TurboTax for comment.

Cudworth said she tried contacting the company when her second stimulus payment didn’t show up, but couldn’t get through.

She never did receive the second $ 600 stimulus payment, but she feels a little superstitious about trying too hard to get it.

“I’m like, well, whatever, I’m not going to question things,” she said. “My numbers have been so good so far with this cancer thing, so I’m like Lord, keep it, do something with it.” 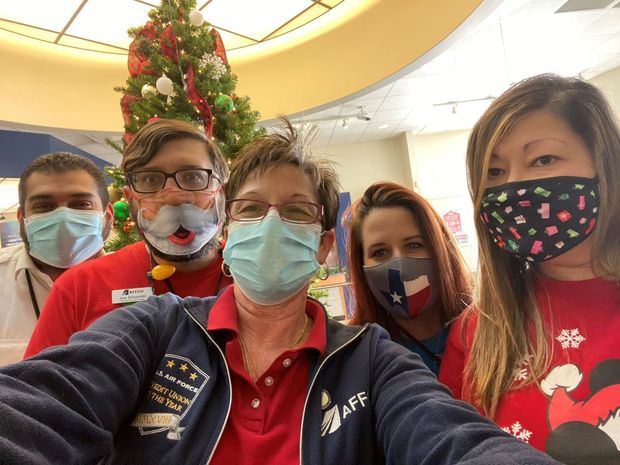 Toi Cudworth with coworkers. She feels lucky to still have a job and work at a supportive employer.

‘I immediately just started hoarding everything’

She got her last paycheck in February, right before her mastectomy surgery, and since then she’s been counting every penny. Cudworth “loves” the company she works for; her employer has been supportive and understanding about her illness.

But that goodwill can’t change some of the hard realities about her employer-based insurance. Unlike previous jobs, where her health insurance paid for 80% of covered expenses, her current plan only pays for 50%. “I cried as soon as I found that out,” Cudworth said. “I immediately just started hoarding everything.”

To trim her expenses as her surgery neared, she asked her auto loan company to delay a payment — they offered two months, but she took only one because she didn’t want to fall too far behind on payments.

She did the same thing with a personal loan. Her company offers short-term disability insurance, but the benefits don’t kick in until an employee has been out of work for 30 days. So far, that’s netted Cudworth two $ 431 checks.

— Toi Cudworth, who owes about $ 4,500 in medical bills after a cancer diagnosis

Cudworth says she nearly had a heart attack when she received what appeared to be a bill for $ 386,019.74 for the mastectomy surgery and a one-night stay in the hospital. But she quickly realized that the actual amount she owed was $ 4,554.11. That’s on top of the approximately $ 6,000 she paid out-of-pocket leading up to the mastectomy.

“As soon as I get back to work, I’m just going to have to take on as many hours as I can,” Cudworth said. “Maybe get another part-time job somewhere. Because I’m 56 and I can’t carry that debt into eternity. If I was 20, it would be different.”

She’ll be tightening her belt for a while. An infection delayed her return to work, and she’ll have to take time off work again for post-mastectomy reconstructive surgery in May, which she’s hoping will be mostly covered by insurance. She got some financial relief recently when she received her latest stimulus payment of $ 1,400.

‘I can only imagine these other people’

Cudworth says her cancer diagnosis has made her more self-focused. But she still keeps an eye out for how she can help other people.

In an online support group for people with breast cancer that she logs onto every morning, she came across a charity that sends care packages to breast cancer patients. She’s hoping to volunteer for the group, and wants to ask her employer or another local company to become a sponsor.

A year after donating most of her first stimulus check, Cudworth still considers herself among the fortunate.

She’s thankful that both her sister in Florida, and her mom, who lives near her in Texas, survived COVID-19, though both have serious lingering symptoms. She’s thankful for her understanding employer and the roof over her head, and that she didn’t have to have chemo or radiation to treat her cancer, which she was terrified about, and that the winter storms in Texas didn’t do serious damage beyond a burst pipe in her apartment.

“I can only imagine these other people that are going through so much more,” Cudworth said.

Does the rally in Hyderabad Industries have more legs?

A strong show by Escorts; accumulate during the soft patch

A strong show by Escorts; accumulate during the soft patch

Cipla â€” While COVID scope continues, watch out for FY23

Tata Motors to double capex of India business up to Rs 3,500 crore on robust turnaround of PV unit

After The Bell: Auto top sectoral gainer, hereâ€™s what investors should do on Wednesday

Mark Hulbert: Why the bull market won’t be over until these 3 S&P 500 sectors sing

Gainers Losers: 10 stocks that moved most on May 18