In 1980 Lauren Sugerman was hired as an elevator constructor at Westinghouse Elevator Company primarily because she was a woman, she said.

Even though the company needed to hire more women to meet the requirements of a lucrative federal contract to build elevators for public housing projects, the men who interviewed her tried doing everything they could to talk her out of the role, she remembers.

To this day she refers to it as a “disinterview.”

“The superintendent just kept saying: ‘You don’t really want this work. It’s too dirty. It’s too dangerous for a girl and you’re not cut out for it,’ and I just had to keep saying, ‘Yes I do want it, yes I do want it.’”

Sugerman, who was 22 at the time, relentlessly vouched for herself despite having no prior experience or training in the industry, because she knew that getting the job would pave the way toward economic security. The pay was $ 7.43 an hour meant she’d be earning more than $ 174 each week compared to her prior job at the Census Bureau.

“ The superintendent just kept saying: ‘You don’t really want this work. It’s too dirty. It’s too dangerous for a girl and you’re not cut out for it,’ and I just had to keep saying, ‘Yes I do want it, yes I do want it.’ ”

Four decades later, a new generation is poised to enter the infrastructure sector if President Joe Biden’s $ 2.3 trillion infrastructure plan delivers on its goal of creating 18 million jobs. Though the explicit discrimination Sugerman faced may be more subtle now, the field remains male-dominated.

The question of how Biden’s plan would help women join the sector is critical as women in the U.S. claw their way back into a workforce they left in record numbers in 2020.

Proponents of Biden’s plan say that $ 725 billion included in it for upgrading and constructing more affordable child-care and elder-care facilities and programs, will enable many more women, particularly moms, to enter the manufacturing and infrastructure workforce. 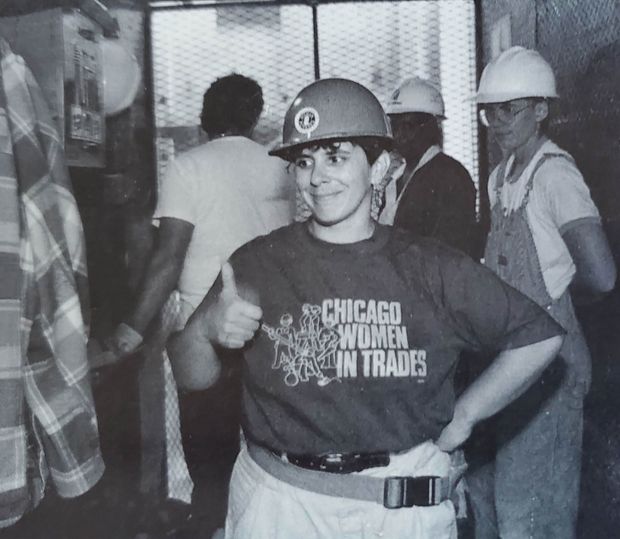 Lauren Sugerman, pictured, took an elevator-construction role in the early 1980s without any prior training. She quit the job and ditched the problematic workplace culture in order to launch Chicago Women in Trades, a trade school program.

“Parents need safe, enriching places for their kids to be so they can go to work,” said Kristin Rowe-Finkbeiner, executive director of MomsRisings, a working mothers advocacy group. “It would be ridiculous to only invest in concrete bridges and roads without investing in care infrastructure,” she said.

These provisions “really can help address some of the challenges that women face in today’s economy,” said Nicole Smith, chief economist at Georgetown’s Center on Education and the Workforce.

But those caregiver-friendly programs won’t change the boys’ club atmosphere and sexist and racist culture that women like Sugerman first experienced in the 1980s, and is still rampant in 2021, experts say.

Equity and inclusion should be the primary goals of Biden’s infrastructure plan, Sugerman said. “If you’re not talking about changing the discriminatory practices that leave people out, you’re also not addressing the infrastructure that can support equity.”

The American Federation of Labor and Congress of Industrial Organizations — or AFL-CIO — supports the Paycheck Fairness Act, which the U.S. House of Representatives passed last week. If enacted, the legislation requires to prove any gender pay gap in organizations is job-related and holding employers accountable for pay discrimination, among other provisions.

Women working full time are paid only 82 cents for every dollar paid to men, and this gap is greater for women of color. Without intervention, the wage gap between all men and women is not expected to close until 2059 and will take significantly longer for Black and Hispanic women,” William Samuel, AFL-CIO director of government affairs, wrote in a letter to Representatives last week.

That said, AFL-CIO secretary-treasurer Liz Shuler told MarketWatch that “the best tool for working women to fight against discrimination and harassment in the workplace is a union card.”

Women workers have borne the brunt of the pandemic

But pay is just one part of the problem faced by women before, during and after the coronavirus pandemic.

Shuler acknowledged that saying “we must do more in order to bring more women into the manufacturing sector, starting with rebuilding our country’s broken care infrastructure,” she said.

When children across the globe were forced to learn remotely, moms — whether employed or unemployed — spent more time helping their children learn, according to research.

In fact, women ages 25-44 were almost three times as likely as men to not be working due to child-care demands, according to data from the U.S. Census Bureau’s Household Pulse Survey. In some cases, moms were working extra hours to compensate for the lost wages of other working-age adults in the household.

On top of this, female-dominated industries such as hospitality, food and tourism were all among the hardest hit during the pandemic — resulting in the highest share of layoffs and furloughs.

Even as some of these businesses are beginning to show early signs of recovery and more than 315,000 women were hired last month, 1.8 million have left the labor force entirely since February 2020, according to an April report published by the National Women’s Law Center, a nonprofit that advocates for women’s equality.

It would take “15 straight months of job gains at last month’s level to recover the over 4.6 million net jobs they have lost since February 2020,” NWLC estimates.

“ ‘If you’re not talking about changing the discriminatory practices that leave people out, you’re also not addressing the infrastructure that can support equity’ ”

Many of the jobs that would be required to execute Biden’s plan, which calls for repairing roads, bridges and public transit, as well as installing more than 500,000 electric-vehicle charging ports across the U.S., pay well above median wages in the U.S ($ 41,950).

For instance, an electrician’s median pay is $ 56,900, according to the Bureau of Labor Statistics.

Importantly if more women get these jobs, which rarely require an advanced degree, it will “help close the gender wage gap tremendously,” said Smith.

“Manufacturing is an orchestra of different people and skills coming together to create an end product,” said Karen Norheim, president and COO of American Crane and Equipment Corporation, a family-owned business with three plants based in Northeastern Pennsylvania that manufactures cranes, hoists and other material handling equipment.

“This can include sales, engineering, fabricating, purchasing, accounting, information technology and more. 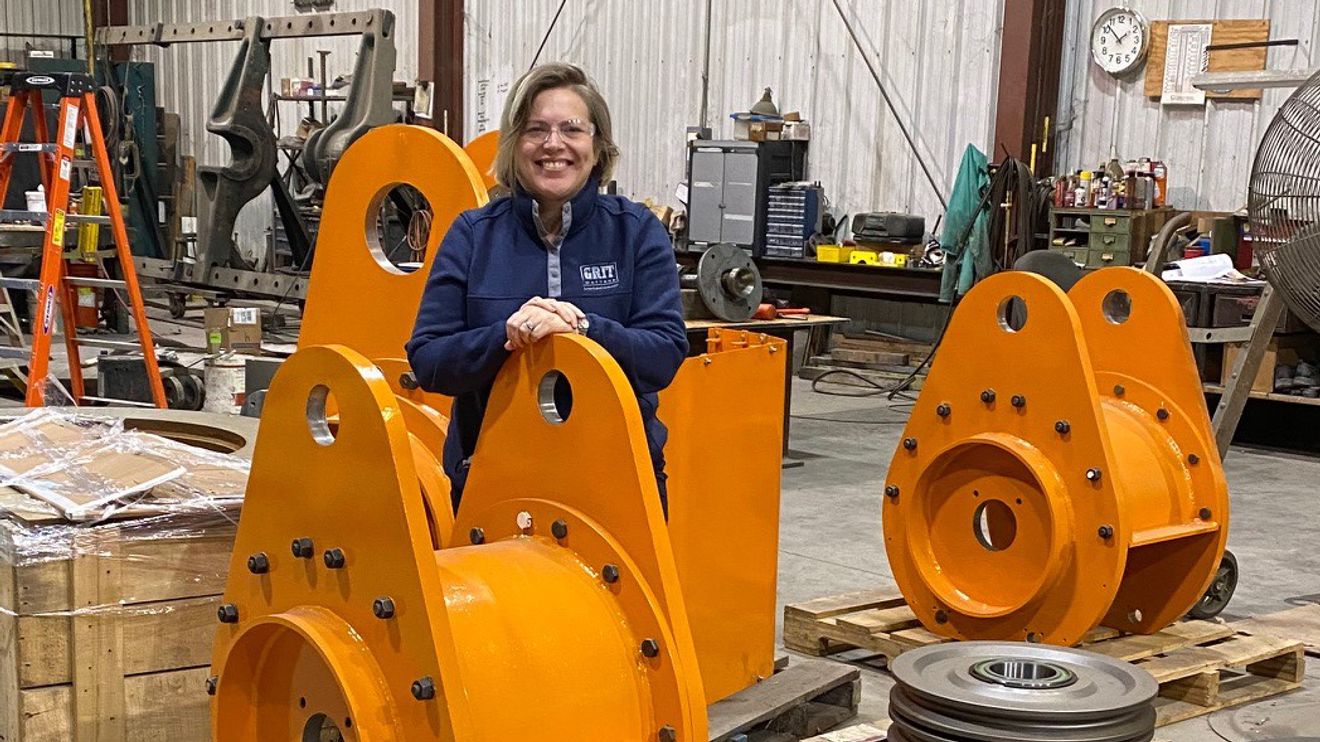 Karen Norheim, pictured, attributes her success in the predominantly male industry to her father who piqued her interest in manufacturing at a young age.

Economic stability comes at a high price for women

When Sugerman started in the elevator business, it was more common to see women on walls than in the workplace.

Tool companies used pinup calendars to advertise their brands with a different bikini-clad woman every month. One well-known company Ridgid Tools, ended its 50-year run selling pinup calendars in 2016, according to one tool manufacturing blog. The company didn’t respond to MarketWatch’s request for a comment.

Men were sometimes openly hostile to their female coworkers. In the early 1980s, Sugerman witnessed a coworker drop tools down an elevator shaft while he knew a Black woman was working at the bottom.

“They thought that was a joke,” she said.

Eventually, Sugerman built up enough savings to buy her own car, and pay for stable housing and quit the job.

“ Chicago Women in Trades only accepts women into its training programs so women ‘feel safe to practice new things without fear of being judged or taunted.’ ”

She took a sizable pay cut for six years while she worked on establishing Chicago Women in Trades, a nonprofit that helps women get training and support to excel in traditionally male-dominated industries.

Collectively, the nonprofit, which is funded by the government and through donations, has helped prepare more than 2,200 women for successful and lucrative careers in industries such as welding, construction and plumbing.

Unlike most trade schools, CWiT only accepts women into its training programs. Sugerman said that enables women to “feel safe to practice new things without fear of being judged or taunted.”

Ultimately, her goal is to inspire and prepare the next generation of women to dismantle the toxic culture that exists, she said.

Sugerman has heard stories firsthand from women and people of color who have encountered serious workplace harassment. Black women have even sometimes found nooses at their workstations, she said.

Brad Markell, executive director of the AFL-CIO Industrial Union Council, acknowledged these issues saying workplace harassment is worse in manufacturing than it is “across the economy,” in a September panel on women in manufacturing.

The workplace can even be dangerous for women.

One story that continues to haunt women in the industry is the 2017 killing of Outi Hicks, a Black 32-year-old union carpenter apprentice and single mother of three, at a Fresno, Calif. construction site by a male coworker who was sentenced to 15 years to life in prison.

The National Association of Manufacturers, a trade organization with over 14,000 members, didn’t respond to multiple requests for comment.

Manufacturing and infrastructure have a ‘PR problem’

It doesn’t help that many young girls grew up seeing shows like “Bob the Builder,” an animated show that showcases Bob’s construction projects, instead of “Barbara the Builder,” Smith told MarketWatch.

“We as a society foster from kindergarten: ‘OK girls you play with the pink doll set and boys, you can have the hardhat and the digger.’”

That’s perpetuated stereotypes that “play themselves out in women’s perceptions of what they’re suited for and what they ought to be doing,” Smith told MarketWatch.

It’s also helped contribute to a significant ‘PR problem’ in infrastructure and manufacturing where women are convinced that every job requires heavy lifting and a hardhat, Smith said.

“ ‘We as a society foster from kindergarten: ‘OK girls you play with the pink doll set and boys, you can have the hardhat and the digger’ ”

— Nicole Smith, chief economist at Georgetown’s Center on Education and the Workforce.

But the jobs in Biden’s plan are “so much more than going out in the sun and digging a hole.” Many jobs will involve bookkeeping, serving as a liaison for people out in the field from an office computer and even helping design the next generation of electric vehicles, she added.

It’s unfortunate that manufacturing jobs aren’t “published or promoted enough as an excellent career option for women,” said Allison Grealis, founder and president of Women in Manufacturing, a national trade association of more than 6,400 women formed in 2010.

A recent survey WiM conducted with Thomas, an industrial supply company, found that more than half of all manufacturing companies in North America offer paid family leave and 94% offer health insurance.

On average some 20% of Americans working in the private sector have access to paid family leave, according to the BLS. While some 73% of workers are offered health benefits.

Female mentors are a scarce resource in the manufacturing industry, said Norheim,

Women who join the industry will quickly learn that women are “preparing the way for others to follow,” she said. “We’re still blazing the trail.”

Norheim said she considers herself an outlier among women in her industry because she hasn’t experienced sexism.

“If it hadn’t been for my father, I may not have considered a career in manufacturing. I would have missed out on the most rewarding job I have ever had.”

: The man who brought tiramisu to the masses has died. Is his legacy a ‘sweet delight’ or a ‘mess of a meal-ender’?