President Joe Biden’s $ 1.9 trillion American Recovery Act scored 75% public approval, and it is full of goodies for reliable Democratic constituencies—money for state budgets, union pensions, universities, and the like—often having little to do with the pandemic.

Now his infrastructure package is full of spending having little to do with rebuilding America’s roads, bridges and the like, but this time Democrats in Congress may prove more difficult to unite. And as the pandemic recedes, the Federal Reserve is proving less cooperative to monetize record deficits as Biden seeks even more spending to Build Back Better.

“ That’s a lot of bonds to sell—even with proposed tax increases. ”

The price tag to repair America’s infrastructure and electrical grid, accelerate the build-out of windmills, solar power and electric vehicles, lessen inequality by making permanent the stimulus package’s one-year boost to the child, dependent care and earned-income tax credits and food stamps, harden supply chains for medical equipment and semiconductors, and boost R&D to meet the China challenge would require at least $ 1 trillion a year.

A trillion here, a trillion there

The federal deficit was $ 3.1 trillion in 2020 or about 15% of gross domestic product. Before the $ 900 billion stimulus package passed in the waning days of the Trump administration and the ARA, the deficit for 2021 was on track to be a bit less than $ 1 trillion. Now it is projected to be $ 3.4 trillion this year and $ 1.6 trillion next year. 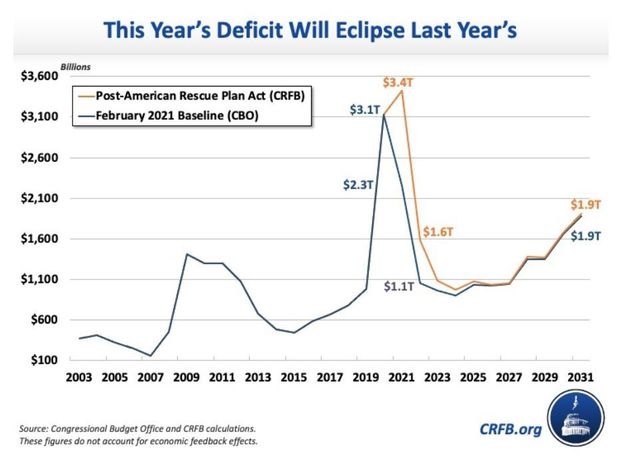 Committee for a Responsible Federal Budget

Add to that another $ 1 trillion for the infrastructure bill and the rest of Build Back Better, and that’s a lot of bonds to sell—even with proposed tax increases.

Each month, the Fed prints money to buy Treasury, mortgage-backed and other securities. During the pandemic, it printed as much money as needed to finance the $ 3.1 trillion deficit and push the rate on 10-year Treasuries well below 1%.

We didn’t get much new inflation in goods and services markets, because households used much of their stimulus checks to pay down debt, pad cash reserves and invest. The latter caused asset price inflation. Last year, stocks SPX, -0.10% COMP, -0.05% DJIA, -0.29% jumped 16% and existing home prices increased 14%.

With herd immunity in the United States within sight, many sectors of the economy are headed to max capacity, and the Fed has a binary choice. It can tolerate households spending more of their cash stashes to boost inflation or dial down its money-printing machine.

Chairman Jerome Powell tells us he expects a temporary surge in prices but not an inflationary spiral and is determined to keep the money flowing to get to full employment,

The latter will be tough, because for many workers the old jobs won’t come back soon, and they may be stuck in lower paying or part-time work. Employers in the hospitality, airline, amusement and other industries are not soon returning to pre-pandemic levels, and the economy would need a lot of accommodative monetary policy, excess demand in other sectors, and inflation to overcome that reality.

Powell’s actions belie his words. The 10-year Treasuries rate is up, because he’s not buying nearly so many bonds this year.

That’s monetary tightening and will brake the recovery.

A higher 10-year Treasury rate TMUBMUSD10Y, 1.644% and steeper yield curve are as important to rates charged on mortgages, auto and student loans and credit cards as the overnight bank borrowing rate FF00, the Fed advertises as its policy rate and has kept near zero since March 2020.

As the months wear on, unemployment—especially U6, which includes folks working part time that can’t find full-time positions and those not currently looking that don’t believe they could find a good job—could remain stubbornly high.

Then you will see the sweat forming on Messrs. Biden’s and Schumer’s brows as they contemplate the midterms in congressional districts and states where Democrats prevailed by only thin margins over the unpopular Donald Trump.

Pressure will build for another big reconciliation bill. As much of the hard left’s agenda in Congress—for example, the push to raise the corporate tax rate to 28%—does not enjoy 50-vote support in the Senate or even majority support in the House, that ballet to reach a deal on the final infrastructure package will be more like the rumble in “West Side Story” than “Swan Lake.”

High interest rates will slow the recovery but not enough to stave off inflation. Minority Leader Mitch McConnell may not have to say much in 2022—the Democrats’ handiwork and infighting may do the campaigning for him.

Peter Morici is an economist and emeritus business professor at the University of Maryland, and a national columnist.

Biden will regret the $ 1.9 trillion stimulus because it squanders the money he’ll need for other priorities

: Millennials and Generation X: This is why you’re having such a hard time saving for retirement

: Junk bonds aren’t as junky as investors think – which makes them a good contrarian buy