The Nifty50 saw consolidation and closed flat on March 22 as banking & financials came under pressure, while FMCG, IT, metals and pharma supported the market on a volatile day.

The index closed near the opening level and formed a Doji pattern on the daily charts. A Doji candle indicates indecisiveness among the bulls and the bears; bounces were being sold in the absence of follow-up buying interest. The index has to decisively surpass 14,788 to break the consolidation range, say experts.

Short-term traders should wait for a decisive move beyond 14,790 levels to go long for an initial target of 14,950 by placing a stop below intraday low, Mazhar Mohammad, Chief Strategist–Technical Research & Trading Advisory at Chartviewindia told Moneycontrol.

“It seems to be the day of consolidation on the bourses as the Nifty50 remained volatile with a 166-point trading range. Hence, in the next trading session, if the Nifty fail to get past 14,788 levels then a sideways move between 14,788–14,350 levels can be expected till monthly expiry which is two trading sessions away,” Mohammad said.

If the index breaches 14,597 on the downside, it can weaken further by slipping to the lower end of the consolidation range, he said.

The index has been underperforming the Nifty from the last few sessions. “It formed a bearish candle on the daily chart but negated its formation of lower highs of the last five trading sessions. Now it needs to hold above 34,000 to witness a bounce towards 34,500 and 35,000 levels, while on the downside support is seen at 33,333 and 33,000 levels,” Chandan Taparia, Vice President | Retail-Research at Motilal Oswal Financial Services said.

Why Option is a better option in choppy market conditions, Shubham Agarwal explains 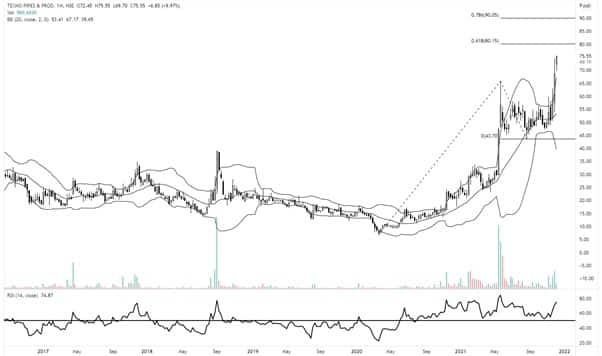 Trade Spotlight | What should you do with HFCL, Indo Count Industries, Tanla Platforms and Texmo Pipes?