Another round of stimulus checks could provide a shot in the arm for stocks and, especially, bitcoin, according to a survey released Monday by Mizuho Securities.

The poll of 235 individuals who expect to receive checks courtesy of the latest round of COVID-19 relief signed into law by President Joe Biden found that two out of five recipients plan to invest at least some part of the proceeds into bitcoin and stocks. Based on the responses, around 10% of the total gross payments, or around $ 40 billion of the $ 380 billion in direct checks, could be allocated to the world’s most popular digital asset and stock purchases.

That’s in keeping with findings from other surveys and with a narrative that’s accompanied a surge in individual-investor activity over the course of the COVID-19 pandemic. Analysts and economists have speculated that boredom induced by the lockdowns coupled with earlier stimulus payments and a lack of activities to spend them on have sparked a surge in the opening of online brokerage accounts as well as interest in so-called meme stocks like GameStop Corp. GME, -16.77% and AMC Entertainment Holdings Inc. AMC, +25.81%.

See: Individual investors are back — here’s what it means for the stock market

When it comes to the current round of payments, a Deutsche Bank survey late last month also found investors ready to use the money for trading. In fact, that poll found investors even more eager to push money into the market, estimating approximately $ 170 billion in potential stock-market inflows out of a then-estimated $ 465 billion in direct payments.

Check out: A new wave of fearless retail investors could be ready to pour $ 170 billion into stocks, says Deutsche Bank

And between bitcoin and equities, the the cryptocurrency was by far the more popular choice. 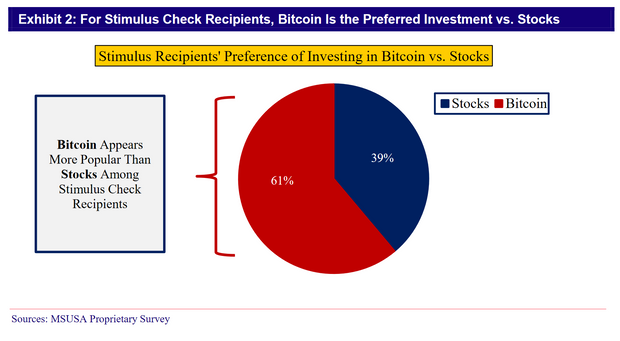 “Bitcoin is the preferred investment choice among check recipients. It comprises nearly 60% of the incremental spend, which may imply $ 25 billion of incremental spend on bitcoin from stimulus checks,” wrote Mizuho analysts Dan Dolev and Ryan Coyne, in a Monday note (see chart above). “This represents 2-3% of Bitcoin’s current$ 1.1 trillion market cap.”

Some Americans might already have received their money. The earliest batches of payments, coming in direct deposits, were due to hit accounts over the weekend. Paper checks and preloaded debit cards will start arriving in the coming weeks, according to IRS and Treasury Department officials. The IRS said it would not load the third round of payments on debit cards a person received in the first two rounds.

See: When will you get your $ 1,400 stimulus check? Some payments already arrived, but many to hit Wednesday

It all comes as bitcoin exhibits its trademark volatility, pulling back Monday after surging past the $ 60,000 milestone for the first time over the weekend. In recent dealings, bitcoin BTCUSD, -1.16% was down 6% at $ 56,537.

Also read: ‘There will be no peace’ until 10-year Treasury yield hits 2%, strategist says

: Office workers in San Francisco, Manhattan and Chicago are not returning to the office in significant numbers, research shows

: More than $16 billion projected to be spent on 2022 midterms: report