How long is the long term in the bond market? Would you believe 57 years? That’s how long you must be prepared to own U.S. government bonds if you want to be assured of not losing to inflation.

This depressing statistic comes from the just-released 2021 edition of Credit Suisse’s Global Investment Returns Yearbook. The authors — Elroy Dimson, a finance professor at Cambridge University, Paul Marsh, a finance professor at the London Business School and Mike Staunton, director of that institution’s London Share Price Database — measured the longest period in U.S. history (since 1900) over which U.S. government bonds produced an inflation-adjusted loss.

The future might not be like the past, of course. But with current interest rates so low, it seems likely that, in the event the future isn’t like the past, it will be worse for bonds—not better.

The 57-year period in which U.S. government bonds lost ground to inflation began in 1924, when the 10-year Treasury yield stood at 3.93% and inflation over the trailing 12 months was negative 0.58% (according to data provided by Yale University professor Robert Shiller). That meant that there was deflation at the time, not inflation. The real (inflation-adjusted) 10-year yield at the time was therefore 4.51%.

In contrast, the 10-year yield TNX, -1.71% stood at 1.53% on March 11 and inflation over the trailing 12 months is 1.68%. So the comparable real yield in this case is negative 0.15%. That low rate translates to significant headwinds in the face of bonds purchased today producing a positive real rate of return in coming years.

The Credit Suisse Yearbook forces us to reconsider the standard narrative that stocks are less risky than bonds. Instead of 57 years, the comparable “long term” for U.S. stocks is 16 years. (See chart, below.) That’s the longest period since 1900 in which U.S. equities produced a negative real return. From the point of view of the long-term investor, stocks therefore appear to be far less risky. 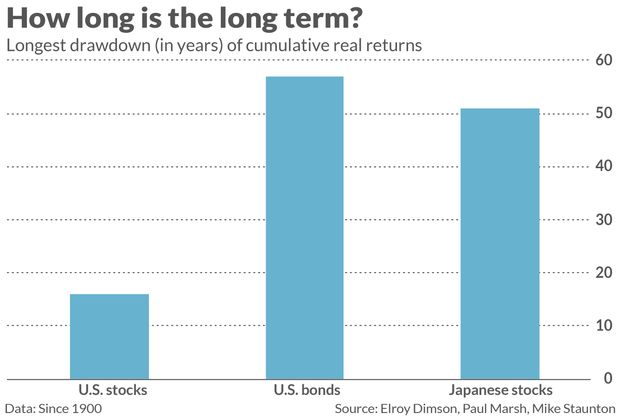 At a minimum, the Yearbook encourages us to focus on risk from many different angles. An asset that appears to be conservative when considering the possibility of default may be quite risky from the perspective of how long it may lag inflation.

Expand focus outside of the U.S.

When focusing on the U.S. from this perspective of lagging inflation over the long term, it certainly appears as though stocks are less risky than bonds. When we expand our focus to non-U.S. stock markets, this conclusion is premature.

Consider Japan, for example. According to the Credit Suisse Yearbook, the longest stretch of time in which that country’s equities lost ground to inflation is 51 years. That’s the same order of magnitude as for U.S. Treasury bonds.

This underlines the importance of focusing on as many different markets as possible, over as many years as possible. Most of what is taken to be conventional wisdom in the financial-planning world derives from a database covering just U.S. stocks and bonds back to 1926. Since the U.S. equity and fixed income markets are the world’s largest, focusing on them is “susceptible to success bias,” as the Yearbook’s authors put it.

Unless we are willing to bet that the U.S. markets over the next century will outperform the rest of the world by as much as they have since the 1920s, we should be basing our forecasts on the performance of global markets for as many years for which data are available.

Plus: Here’s how far the Nasdaq could fall if bond yields reach 2%

Mark Hulbert: Recession fears are growing. Is this weak stock market trying to tell us something?

Deep Dive: These are the 2 main reasons you should consider adding semiconductor stocks to your portfolio now