Worker wages have been a hot topic in recent weeks as debates rage online over things like a $ 15 federal minimum wage and whether interns should be paid.

Rep. Alexandria Ocasio-Cortez (NY-14) claimed it’s “utterly embarrassing” that there’s a debate in America about paying workers “enough to live” on, and points out that workers at McDonald’s MCD, +0.45% make three times more in Denmark than in the U.S.

While minimum wage is not specifically mentioned, the tweet appears to be referencing what Ocasio-Cortez perceives to be lackluster wages for many in the U.S.

The tweet comes after Senate parliamentarian Elizabeth MacDonough last week ruled against passing minimum-wage legislation through the budget-reconciliation process, dealing a blow to changes to the federal minimum wage through the COVID-19 relief package. 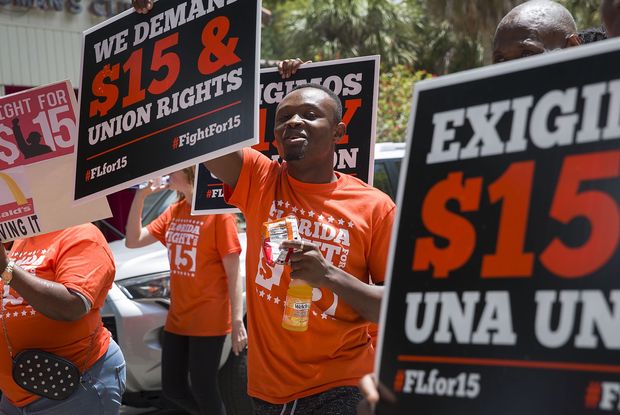 People gather in Florida in 2019 to ask the McDonald’s corporation to raise worker wages to $ 15.

Many U.S. McDonald’s restaurants pay workers slightly above minimum wage, according to research from Princeton University — the federal minimum wage in the U.S. is $ 7.25, but can be higher depending on the state.

The wage differences in McDonald’s workers in the U.S. and Denmark may not have much to do with minimum wage, however.

Denmark doesn’t have a nationwide minimum wage, instead it has a strong union presence throughout the country that negotiates wages.

“In Denmark, wages are negotiated by the trade unions and the employers’ organizations alone — it has been that way for more than 100 years,” Denmark’s employment minister Peter Hummelgaard said last year.

McDonald’s workers in the U.S. do not have a labor union.

Additionally, there is data to suggest that increasing wages at McDonald’s can lead to small price increases of menu items.  A 10% minimum-wage increase leads to a 1.4% increase in the price of a Big Mac.

“Elected leaders have a responsibility to debate and set the minimum wage.  We’ve been clear that we welcome the opportunity engage in a productive dialogue on the minimum wage, including on how we make sure that, as changes are introduced, it’s done in a way that balances the needs of our people and our communities and the needs of business owners, including the nearly 2,000 small business owners who own and operate more than 95 percent of McDonald’s restaurants in the U.S.,” a McDonald’s spokesperson told MarketWatch

The Moneyist: ‘The weight of this debt is crushing’: I’m 74, and a retired speech-language pathologist with a student-loan debt of $200K. Am I obliged to pay it off?

Outside the Box: The quick and easy way to lose your life savings