It’s been a pretty impressive 12 months for the world’s leading miners.

And there are two big trends that should further boost the sector.

The first is the decline of the dollar DXY, -0.15%. A weak dollar environment increases the purchasing power of the key commodity-consuming markets, notably China, points out Ephrem Ravi, an analyst at Citigroup. A lower dollar also helps loosen global monetary conditions, as so much of the world’s corporate debt is denominated in the greenback.

As the chart shows, there is usually a strong correlation between mining sector stocks and the change in the dollar. 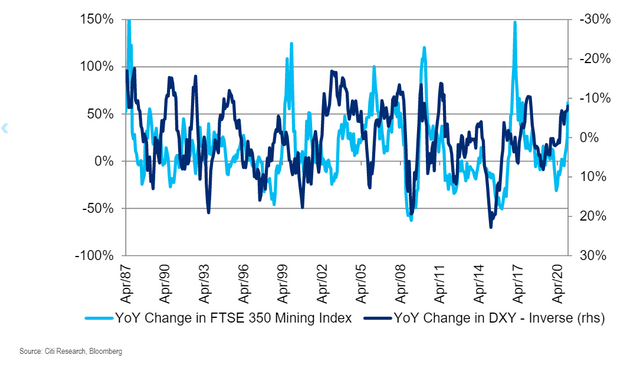 Another boost is coming from the rise in copper vs. gold. The copper-to-gold ratio has been edging up over the past year, which implies optimism over global growth, says Citi’s Ravi. Copper is needed for manufacturing and construction, whereas gold is often used as a safe haven in ties of financial duress.

Jeffrey Gundlach, the DoubleLine Capital chief executive and so-called bond king, has said the ratio of copper to gold closely tracks U.S. government bond yields, which tend to rise as the economy improves.

Mark Phillips, European equity analyst at Ned Davis Research, says it makes sense for miners to go through booms and busts. “A boom will start when an increase in demand for commodities drives up prices while short-term supply remains relatively fixed. As elevated prices persist this incentivizes companies to invest in new projects that had previously been uneconomical,” says Phillips.

“However, long lead times typically mean that many companies invest in new projects at the same time, resulting in cost pressures and a supply glut, which may come at a time when demand begins to wane. This results in a fall in prices, and metals and mining companies high up the cost curve go out of business,” he adds.

Also behind the gains are talk by some of a commodities supercycle. That basically means a cycle lasting decades, and moving commodities as a whole. “The commitment by many nations to be carbon neutral and less energy intensive by 2050-2060 requires significant infrastructure investment which will be commodity intensive. Structural models of commodity prices have shown that at each major stage of economic development: agricultural, industrial, and service, commodity usage can change, increasing the likelihood of a supercycle in early stages of development,” says Daniel Jerrett, chief investment officer at Stategy Capital, which started a global macro fund last month.

The talk in the market is of inflation, fueled by lax monetary policy and aggressive fiscal spending. Analysts at Variant Perception, a research firm, have made the case that heightening inflation risks, the need to hedge for them, and “generationally cheap” prices will lead to a commodity supercycle. Among the major banks, JPMorgan also has endorsed the commodity supercycle view.

It is lonely betting against miners at the moment. There aren’t any short positions against the big miners that are large enough to be reported, according to the daily updates from the Financial Conduct Authority.

But there are a few with dissenting views. Ben Davis, an analyst at Liberum Capital, has a sell rating on Rio Tinto, and a hold on BHP. Dollar weakness, he acknowledges, can help the rally continue, “but feels like a lot of that in the price.” And Davis doesn’t believe commodities are in a supercycle.

But Davis anticipates a slowdown in Chinese credit, which will soon make an impact. Loan growth gradually has decelerated from 13.2% year-over-year in June to 12.7% in January.

“Chinese credit tapering will start being felt in commodities demand and whilst the restock in the rest of the world is a very powerful force, it’s unlikely to last beyond the middle of the year. The earliest and biggest beneficiary this cycle has been iron ore, and for that reason BHP and Rio Tinto have the most near-term downside in our opinion,” he says.

The Margin: NASA is about to crash a spacecraft into an asteroid. Here’s how to watch.