The popular dogecoin crypto asset, engineered as a joke back in 2013, has tanked over the past week after reaching a record value on Monday, leaving few investors laughing.

Dogecoin, at last check, was trading at 0.06784 cent, down over 20% from its Feb. 7 record high of 0.087159, according to data from CoinDesk. That decline meets the commonly used criteria among Wall Street chart watchers and technical analysts for a bear market.

It isn’t clear where the crypto is headed from here, it is still up by about 50% over the past seven-day period and enjoys an eye-popping 1,350% gain since the start of 2021, boasting a market value of $ 8.7 billion, as of Friday afternoon. That ranks dogecoin just outside the top 10 cryptos, with bitcoin BTCUSD, +1.06% atop the leaderboard with a market value surpassing $ 880 billion.

“ ‘People are moving markets en masse and are playing greater fool with each other without understanding the ramifications or their own psychological limitations.’ ” 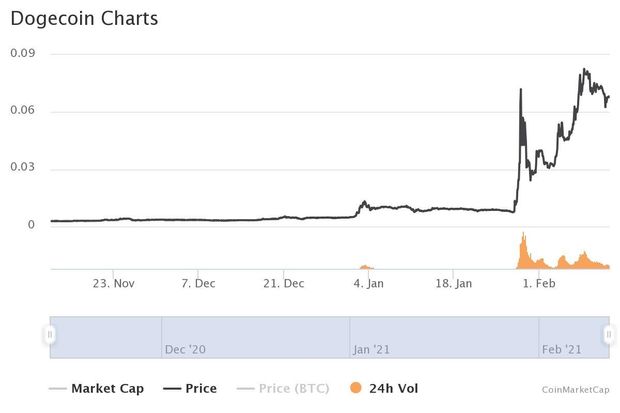 Doge’s rally got started on the back of a series of bullish, albeit sometimes cryptic tweets from Tesla Inc. TSLA, +0.55% Chief Executive Elon Musk.

A number of celebrities including, Calvin Broadus, otherwise known as Snoop Dogg, and Gene Simmons of the rock band Kiss joined Musk—as well as billionaire investor Mark Cuban—have been tweeting about investing in dogecoin.

On Reddit’s popular SatoshiStreetBets chat forum, some expressed a hope to push dogecoins value to $ 1.

However, crypto experts have warned that dogecoin, pronounced “d?j-coin” and commonly associated with a popular meme featuring a shiba inu dog, has limited utility compared with other decentralized cryptographic assets, including bitcoin.

Dogecoin co-founder Billy Markus told The Wall Street Journal in an article at the beginning of February that he created the asset in 2012 as a “lighthearted cryptocurrency,” then known as Bells, to serve as the fun version of bitcoin.

In an open letter on Reddit this week, Markus also wrote about the cryptocurrency.

“It went from a silly joke to something worth something to people very quickly, and a community was developing fast, with lots of shady people and lots of new people, quickly putting up services and infrastructure around it,” the co-founder wrote.

Nic Carter, a crypto and blockchain venture capitalist who founded Castle Island Ventures, on CNBC earlier in the week cautioned that average investors could be badly hurt by making speculative bets on an asset with no real purpose. He also found it quizzical that Musk would support the virtual asset.

“It’s somewhat disconcerting to see Elon Musk so enthusiastic about it,” the Castle Island co-founder said.

Bullish bitcoin investors make the case that price gains in bitcoin, the world’s No. 1 cryptocurrency, are supported by the limited supply of the crypto that is inherent in its code. Only 21 million bitcoin will ever exist, and so-called mining for bitcoin, or solving complex computational problems that are rewarded by bitcoin, become harder as time goes on. The final cache of bitcoins likely aren’t going to be mined until around 2140.

The supply of dogecoin, on the other hand, has no built-in limit, with the number of dogecoin that can be mined at any given time varying from one to hundreds of thousands.

Nonetheless, interest in dogecoins underscores the appetite for alternative assets in an environment where 0% interest rates are prevalent as governments around the world attempt to mitigate the economic harm from the COVID-19 pandemic.

“People are moving markets en masse and are playing greater fool with each other without understanding the ramifications or their own psychological limitations.

Mutual Funds Weekly: These money and investing tips can be a key to success when stock and bond markets fail