Deutsche Bank analyst Lloyd Walmsley boosted his stock price target for the Class A shares to $ 202, which is about 22% above current levels, from $ 160. He reiterated the buy rating he’s had on the stock for the past five months.

Walmsley said he believes Zillow is a “secular post-COVID winner,” and one of his handful of favorite internet names for 2021.

“We think the housing market strength and product cycles can drive upside to estimates over the next two years, as the macro backdrop likely allows the company to take its time with some major product unlocks we expected this year — namely Partner Leads and the broader rollout of Flex,” Walmsley wrote in a note to clients. 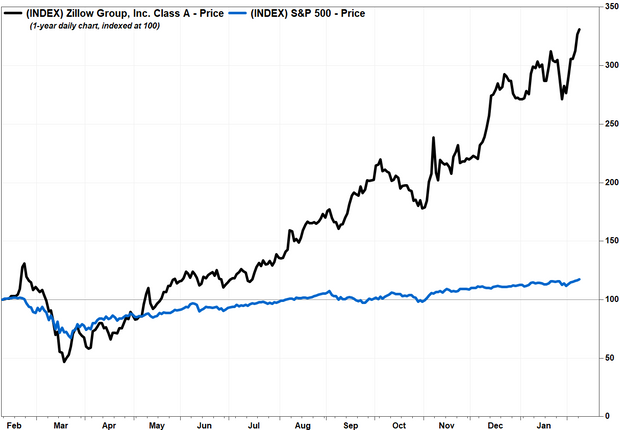 Zillow is scheduled to report fourth-quarter results after Wednesday’s closing bell. The FactSet consensus is for the company to swing to an adjusted per-share profit of 28 cents from a loss of 26 cents a year ago, while revenue is expected to fall about 22% to $ 740 million.

Wedbush’s Ygal Arounian reiterated the outperform rating he’s had on the stock since January, while maintaining his $ 167 price target on the Class A shares.

Optimism ahead of earnings is understandable, as the stock has soared by an average of 12.8% on the day after the past five quarterly results were reported.

Zillow also drew some attention on social media after the company was subject of skit by “Saturday Night Live” over the weekend, in which Zillow was a website older millennials used to fantasize about real estate.

Separately, Fannie Mae said Monday that its Home Purchase Sentiment Index rose to 77.7 in January from 74.0 in December, as consumers reported a “significantly more positive view of home-selling conditions” for the month.

Fannie Mae said the January jump in the index reversed much of what it lost December.

“Overall, the index’s monthly increase was driven largely by a substantial jump in the share of consumers reporting that it’s a good time to sell a home, with many citing favorable mortgage rates, high home prices and low housing inventory as their primary rationale,” said Fannie Mae Chief Economist Doug Duncan.

MarketWatch: ‘Society’s very existence could have been threatened’: Retired General Stanley McChrystal says the U.S. needs to ‘go to school’ on pandemics before we’re hit again