The Nifty50 started off the week on a strong note and remained bullish throughout the session to end at a fresh record closing high on February 8, backed by strong global cues and consistent FII inflow. Banking & financials, auto, IT, and metals stocks led the market higher.

The index formed a bullish candle on the daily charts as closing was higher than opening levels. Experts feel the momentum may drive the Nifty50 towards 15,300 levels if the index decisively surpasses 15,159 levels in the coming sessions.

Considering poor risk-reward ratio in favour of bulls from current levels, Mazhar Mohammad of Chartviewindia.in advises traders to remain neutral on the index and particularly shorts should be avoided unless strong signs of weakness are visible.

Hence, he feels some sort of breather for bulls look inevitable in the next couple of trading sessions though weakness in this regard will be confirmed on a close below 15,014 levels.

On such a close, Nifty may trigger a corrective downswing, according to him.

“Nevertheless as momentum is still favouring the bulls if they manage to push the index beyond 15,159 levels then the ideal target shall be 15,300 levels,” he said.

India VIX moved up by 2.30 percent from 23.41 to 23.95 levels, which needs to cool down below 21 mark for continuation in the ongoing momentum with higher market base, Chandan Taparia of Motilal Oswal Financial Services (MOFSL) said.

The above-mentioned option data indicated a wider trading range for the Nifty at 14,500-15,500 for the coming sessions.

Bank Nifty opened gap up at 36,073.85 but moved quite steadily during the day. It moved sideways and consolidated for the most part of the day. The banking index did not surpass the previous day’s high but ended the day with gains of 329.20 points at 35,983.70.

“The index continues higher bottom from the last seven sessions but formed an Inside Bar candle on the daily scale. Now it has to hold 35,500 zone to witness an up move towards 36,500 levels, while on the downside support is seen at 35,000 and then 34,500 levels,” Chandan Taparia, Analyst-Derivatives | Retail-Research at Motilal Oswal Financial Services said. 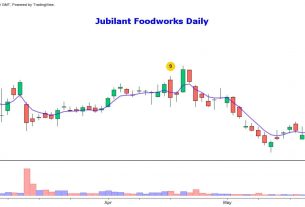 Hot Stocks | Here#39;s why you should bet on Hero MotoCorp, Jubilant Foodworks for short term