Don’t try this at home, kids.

Like other outspoken “TSLA-naires” before him, DeBolt took to social media last week to celebrate in his massive Tesla TSLA, +0.20% windfall, withthe stock in the midst of an 11-session win streak that ended Monday.

While Tesla bulls cheered, others — more conservative types — winced. Ben Carlson, portfolio manager at Ritholtz Wealth Management LLC, acknowledged feeling pangs of jealousy when he comes across stories like DeBolt’s, but the approach just isn’t for him, nor should it be for most.

“I’ll never put my life savings into a single investment that could go to the moon,” he wrote in a Wealth of Common Sense blog post. “But being a diversified investor means I’ll never put my family in the position of being completely wiped out by a single position.”

DeBolt, however, is 39 years old, doesn’t have a wife or kids, and is more than willing to ride the ups and downs. He’s already been through plenty with his Tesla stake — he lost $ 1.3 million on paper in one day last year — and he doesn’t appear to be sweating potential drawdowns in the future. 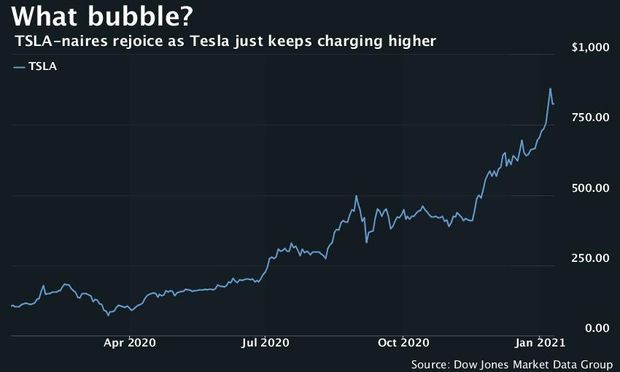 Ramp Capital, a popular anonymous financial blogger, found his story “captivating” because of DeBolt’s “grit and determination to buy and hold through thick and thin — while having faith in a single company and god-like CEO in the face of all odds. “

So Ramp reached out and asked DeBolt if he was concerned that Tesla is in a bubble after its nosebleed rally in 2020.

“No, I don’t think so. The energy and transportation sectors are being disrupted, and Tesla’s stock price reflects that,” DeBolt explained. “I think we could eventually see $ 20,000 to $ 30,000 per share by 2030 if they can execute, assuming no more stock splits.”

“This company is just getting started,” DeBolt told Ramp. “We might not see a company like Tesla in the next 50 years.”

See: Opinion: I’ve pulled out all the stops for Tesla — but can’t find the upside on the stock

Market Extra: The Elon Musk tweet that led to a 5,675% surge in Signal Advance’s stock

The Moneyist: My elderly stepfather and his pastor opened a bank account together. Is this normal?

The Fast Foodist: I got $63 worth of birthday fast-food freebies and you can too. But is it worth it?