To ensure that errant vehicle owners who break traffic rules often are penalised, a panel set up by the insurance regulator has proposed a new ‘traffic violation premium’ that will be added to the motor insurance product.

This means that any vehicle owner renewing his/her motor insurance (third-party or comprehensive cover) would have to pay this additional premium depending on the traffic violations committed in the previous two years.

The higher and graver the number of violations, the higher the premium. So, customers will end up paying anywhere between Rs 100-750 for two-wheelers and Rs 300-1,500 for four-wheelers/commercial vehicles as an additional premium.

Moneycontrol gives you the lowdown on the new system and its scoring method:

What is the reason for this proposal?

The IRDAI working group said in its report that errant driving is a cause for concern in India. According to the Ministry of Road Transport and Highways’ Road Accidents Report, 2018, India had 467,000 road accidents, which led to 1,51,000 deaths that year.

India ranks first in the number of road accident deaths across the 199 countries reported in the World Road Statistics report for 2018 followed by China and the US. As per the WHO Global Report on Road Safety, 2018, India accounts for almost 11 percent of accident-related deaths globally.

The government has also been taking efforts through Intelligent Traffic Management Systems in metros to ensure better traffic management and minimise road accidents.

Insurance regulator IRDAI was also consulted to help catch offenders and bring out a behavioural change. A high-powered committee for traffic management in the National Capital Territory (NCT) of Delhi, under the chairmanship of the Union Home Secretary, requested IRDAI to examine the issue of linking motor insurance premium with traffic violations.

Following this, a working group was set up in 2019 to look into the issue. The mission was to establish a system where traffic violations would be reflected in the motor premiums.

Third-party motor insurance is mandatory for all vehicles running on Indian roads. This policy pays for third-party liabilities in case an accident leads to death/injury of a pedestrian or another vehicle passenger/driver. Own-damage motor cover, which is optional, pays for damages to one’s own vehicle due to accidents, theft or natural calamities.

As per the working group proposal, the traffic violation premium will be applicable for both third-party and own-damage covers.

How will it work?

It is proposed that irrespective of the motor insurance cover sought during insurance renewal of a car/bike/truck, a traffic violation premium will be charged.

The traffic violation premium will be payable on the vehicle, rather than the owner. So, an individual buying a new vehicle (or pre-owned) will not be required to pay this premium depending on his/her past traffic violations in the last two years.

When a vehicle is bought, the motor policy begins from scratch and even if it is a pre-owned vehicle, the new owner won’t need to pay any violation premium on its past records.

The traffic violation premium will be calculated on the basis of a system of Traffic Violation Points, which will include frequency and severity of different traffic offences.

How does the scoring system work?

The Insurance Information Bureau of India (IIB) will coordinate with various States’ traffic police and the National Informatics Centre to capture traffic-violation data and calculate the violation points of each violating vehicle. This information will then be made available to all general insurers through IT system integration with insurers.

Data for the past two years will be taken. And if the offence is repeated, the violation will get points multiplied by the repeat frequency. 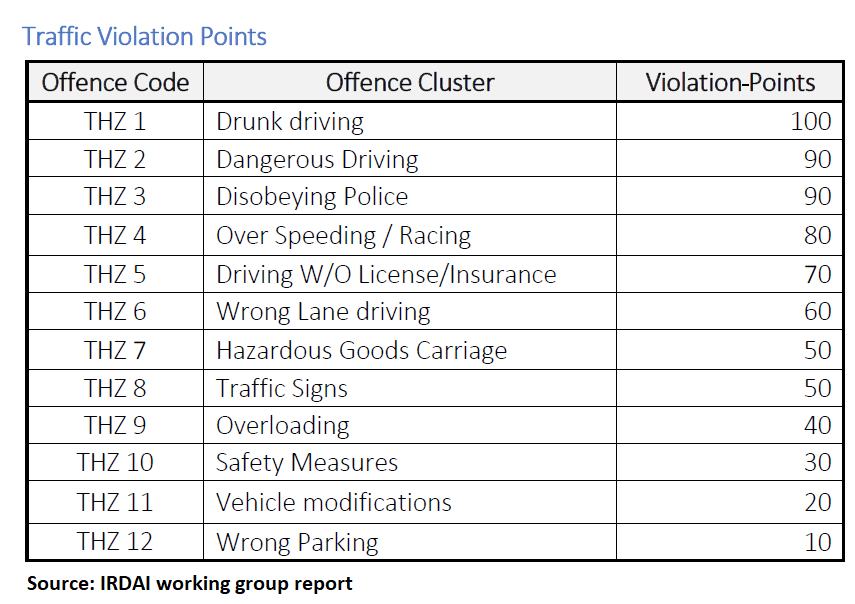 Hence if a vehicle owner approaches an insurer for motor insurance and has violated the traffic signal thrice in the last two years, his/her violation points for the purpose of traffic violation premium will be 300, which is 50 for first offence, 100 for the second and 150 for the third offence.

The scoring system is designed in a way that offences are marked differently. Here, drunk driving attracts 100 violation points while dangerous driving and disobeying police attracts 90 points each. Violating traffic signs and carrying hazardous goods will attract 50 points each.

The lowest violation points are attached to minor offences such as wrong parking (10) and vehicle modifications (20).

How will premium be calculated?

Once the IIB submits the violation points to the insurers based on their data analysis, insurers will have to impose the additional traffic violation premium as per the scores.

Here, if the violation points do not exceed 20, then the insured is not charged any additional amount. Between 20-40, he/she will have to pay Rs 100 for two-wheelers and Rs 300 extra for four-wheelers/commercial vehicles.

If the points exceed 300, the extra yearly premium is Rs 750 for two wheelers and Rs 1,500 for four-wheelers/commercial vehicles.

IRDAI will revise these penalty premiums once every three years.

When will the system be implemented?

IRDAI has sought comments from stakeholders on this report. As part of this proposal, the High Powered committee for Traffic Management in NCT Delhi has recommended the system be run on a pilot basis in the NCT of Delhi.

Since Delhi is the capital of the country, it has vehicles coming in from across India. So, it has been proposed that other State vehicles that cause traffic violations in NCT Delhi will have to pay a traffic violation premium at the time of renewing the motor insurance of their vehicle in their own States.

This could be extended to other States depending on the facilities available. Once this pilot study is completed, IRDAI will bring out a final report citing its effectiveness and then finalise the premiums.

Movers Shakers: Top 10 stocks that moved the most last week