Asian stocks were mostly lower on Tuesday, tracking Wall Street declines as political turmoil in Washington and rising coronavirus cases worldwide weighed on sentiment ahead of the start of the quarterly earnings season.

Several big tech giants, including Twitter Inc, Amazon.com Inc , Alphabet Inc, Facebook Inc and Apple Inc, have taken actions against Trump and his network of supporters, as concerns mounted over the risk of continued violence.

Investors also kept an eye on the continued spread of the coronavirus globally as cases surpassed 90 million on Monday, according to a Reuters tally.

”The weakness was led by tech and I think the banning of Trump’s account by Twitter and Amazon stepping up against Parler all brought a renewed focus on increased regulation and reining in on tech,” said Thomas Hayes, chairman of Great Hill Capital in New York.

Investors are expecting guidance on the extent to which executives see a rebound in 2021 earnings and the economy from results and conference calls from JP Morgan, Citi and Wells Fargo Friday.

Meanwhile, longer-term Treasury yields were at their highest since March before new long-dated supply coming this week and on speculation of more U.S. fiscal stimulus as Democrats will have control of Congress and the White House.

”People are optimistic to see the yield curve steepening and it could help spreads and net interest margins for banks,” Hayes said.

The spread between the two-year and 10-year Treasury yields brushed against 100 basis points to hit its steepest since July 2017.

The climb in yields in turn offered some support to the dollar, which rose to its highest in over two weeks against a basket of currencies.

Crude oil prices fell, hit by renewed concerns about global fuel demand amid tough coronavirus lockdowns across the globe, as well as the stronger dollar. 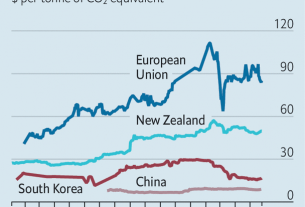