The IT index was down over a percent dragged by Coforge which fell 3 percent followed by Infosys, Mphasis, Tech Mahindra and Wipro.

Among the sectors, the IT index was down over a percent dragged by Coforge which was down 3 percent followed by Infosys, Mphasis, Tech Mahindra and Wipro.

Share price of HCL Tech was trading lower by almost 2 percent after the company declared its Q3 numbers. India’s third-largest software services provider reported a 26.7 percent jump in consolidated profit for the quarter ended December 2020 at Rs 3,982 crore, versus Rs 3,142 crore in the previous quarter. 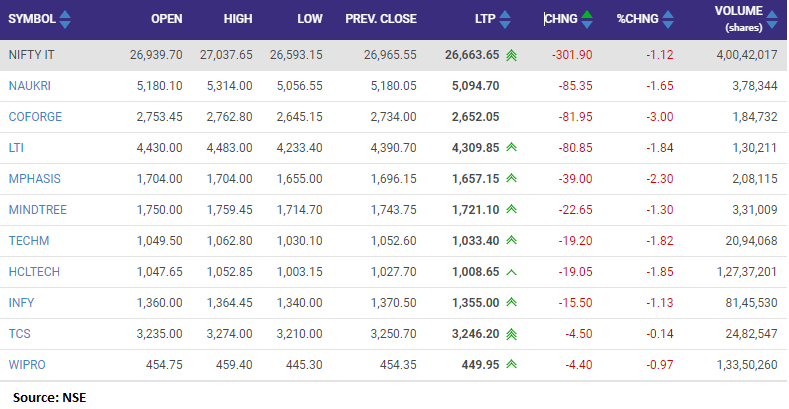 Infosys share price is trading in the red despiet the company reporting a strong beat on all parameters in the December quarter earnings, with upward revision in full-year constant currency revenue growth as well as margin guidance following a record deal wins.

Wipro stock was down a percent on January 15. The IT major reported a consolidated profit of Rs 2,966.70 crore for the October-December quarter, rising 20.8 percent compared to Rs 2,455.80 crore in the corresponding quarter of the previous year.

Credit Suisse has increased FY21E EPS of Wipro by 7 percent & FY22-23e EPS by 9-12 percent, while higher or lower-than-expected growth & sharp forex movement are the key risks.

Morgan Stanley has kept underweight on the stock and raised target to Rs 410. It raised FY21-F23 EPS by 5-6 percent on back of a strong Q3 & improved demand environment. Jefferies has kept an underperform rating on the stock with target at Rs 400.