Gautam Adani’s plan to raise at least $ 5 billion in equity aims to shut down two of the most frequent criticisms leveled against the Indian tycoon’s swelling empire: high debt ratios and a limited investor base.

After four years of eyebrow-raising gains — some Adani Group shares surged more than 2,000% — Asia’s richest person is embarking on a fundraising campaign that will likely include a local share sale as well as buy-in from large investment funds in the Middle East and Canada. An equity injection of this size is expected to help the conglomerate deleverage and Bloomberg Intelligence sees a successful equity raise across the group supporting the companies’ dollar bonds. 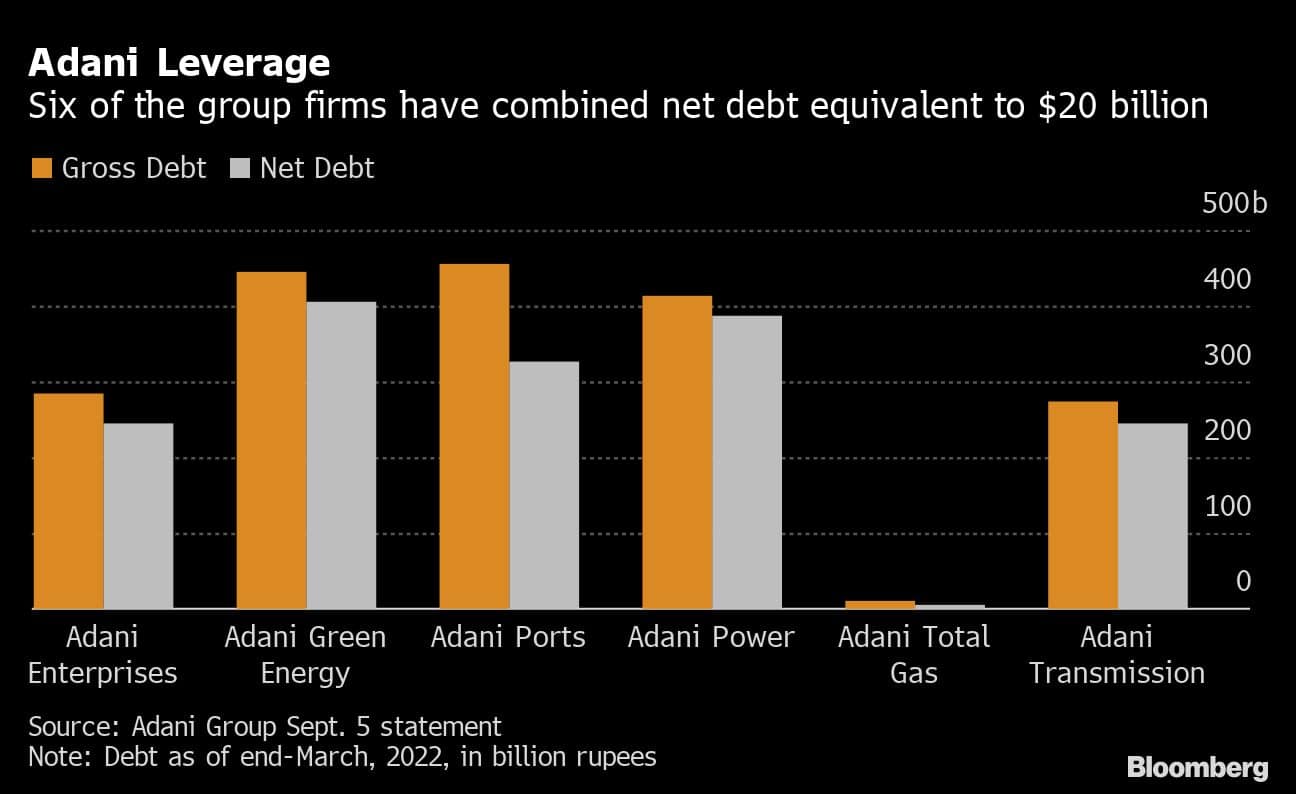 The billionaire is seeking legitimacy in the face of questions about his group’s breakneck expansion from a traditional port operator to a sprawling empire with assets including media, cement and green energy, that critics say has boosted leverage and financial complexity. With this fundraising, in one fell swoop Adani can improve debt ratios, broaden his investor base, improve stock liquidity and trigger wider analyst coverage for a conglomerate that’s surprisingly under-covered despite the outsized stock gains.

“The fundraising exercise by Adani Group is putting the naysayers in place,” said Sanjiv Bhasin, director at Mumbai-based brokerage IIFL Securities Ltd. “He is embarking on a new fund drive that will boost the credibility of the group and allay the fears of investors.”

Yet questions remain over what kind of investors Adani will be able to attract, and whether they can be persuaded to buy in at the astronomical valuations his units trade at. The Adani Group declined to comment.

Adani executives are courting global sovereign and pension funds, including Mubadala Investment Co., Abu Dhabi Investment Authority and the Canada Pension Plan Investment Board, Bloomberg reported Wednesday. The total fundraising size could be as high as $ 10 billion, according to people familiar with Adani’s thinking.

The equity plans come as the 60-year-old seeks to reinvent himself on the global stage. Despite adding more billions to his wealth than any other tycoon this year, Adani has struggled to shed the perception that his meteoric rise has been fueled by support from Indian Prime Minister Narendra Modi. Research firm CreditSights in September had put the spotlight on the group’s “elevated” leverage and lawmakers have sought an investigation into some of the group’s investors.

“There are a lot of questions about opacity, about lack of disclosures, valuations obviously. But it’s trickier because the businesses will grow if India grows,” said Vikas Pershad, a fund manager at M&G Investments (Singapore) Pte. “They are at the right place at the right time.”

The board of the flagship company, Adani Enterprises Ltd., is meeting on Friday to discuss fund raising options. Adani Enterprises is trading at a valuation of over 160 times its one-year forward earnings. By comparison, Reliance Industries Ltd. — India’s largest firm by market value — is at about 21 times, according to data compiled by Bloomberg.

“Most Adani stocks are highly valued, so investors have to be careful about taking fresh positions,” said Mohit Nigam, a fund manager with Hem Securities Ltd. in Jaipur. “Also how they are going to handle debt will be crucial going forward.”

Adani Enterprises was added to India’s benchmark Nifty 50 index in September and its equity sale is likely to draw in a number of passive funds. But merely adding more strategic or passive investors is unlikely to increase liquidity, according to Alice Wang, a portfolio manager at Quaero Capital in London, who estimates the company’s free float at about 10%, far lower than the reported 27%.

“It will be a pity if it’s the same strategic holders participating,” Wang said. “But as this might solve their problems without putting pressure on their share price, it’s a real fait accompli — great for the banks, jury still out for the equity holders.”

A successful outcome for the tycoon would be to pull off something similar to fellow Indian billionaire Mukesh Ambani, who raised more than $ 27 billion in 2020 by selling stakes in units of Reliance Industries to global investors of the likes of Meta Platforms Inc. and Google’s parent, Alphabet Inc.

Anish Teli, managing partner at QED Capital Advisors LLP in Mumbai, said Adani’s expected share sale will be the first of many as the conglomerate drives into new industries.

The current plans will not just be “testing appetite for the stock,” it will also “pave the way for further fund raises from institutional investors,” Teli said. “The group is in various businesses which are cash hungry and have long gestation periods and may need more fundraises soon.”?