COVID-19 WAS never going to be good for the poor. At first, however, the disease was not associated with rising inequality. Richer economies tended to suffer larger declines in GDP per person than many poor ones in 2020—and within those countries hefty stimulus packages protected the poorest from penury.

As the pandemic wore on, though, its effects on global inequality shifted. Richer countries enjoyed better access to vaccines than poorer ones, and were more able to sustain spending on programmes to support incomes and bolster recoveries. The net effect of the pandemic has been to raise inequality between countries, back to the levels of the early 2010s on some measures.

Thus the long decline in global inequality that began around 1990 has come to an end—and gaps between rich and poor now look likely to widen, as poor countries take longer to recover from covid. Yet the causes of inequality’s resurgence are not universally bleak. Paradoxically, part of the explanation lies in increasing incomes among the formerly impoverished.

To understand why, consider the two different forms of inequality researchers look at: gaps that occur within a country and those between countries. From the 1980s through the 2000s, inequality rose within most countries (including many in the emerging world) as rich Americans, Britons, Chinese and so on did better than their poorer compatriots.

The contribution of this within-country dynamic was swamped, however, by the diverging fortunes of rich and poor countries as a whole. Because poorer countries were growing faster than richer ones—and massive ones like China and India were doing especially well—the net effect of changes across the world economy was a sharp decline in global inequality.

Progress then ground to a halt in the decade before the pandemic. Shifts to the distribution of income within countries ceased to push inequality higher (indeed, in some recent years within-country shifts served to reduce global inequality on net). But this generally welcome trend occurred alongside much more halting progress in the closing of income gaps between countries.

In the 2000s, for example, an economy at the 30th percentile of the global income distribution grew two percentage points faster on an average annual basis than did America, in terms of GDP per person. In the 2010s, by contrast, GDP per person at the 30th percentile grew slightly slower than in America. As a consequence, measures of global inequality showed very little improvement, if any, from about 2014 until the eve of the pandemic.

During the pandemic, vaccines and more generous rich-world stimulus widened the gap between countries. Worse still, reckons the World Bank, the burden of income losses in poorer countries fell disproportionately on those at the bottom of the income spectrum. As a result, the increase in global inequality reflected both the widening gap between rich and poor countries as well as increased inequality within poor economies.

Developing countries now face gloomier economic prospects. Scarring effects of the pandemic, including forgone schooling and investment, stand to constrain growth, as do heavy debt burdens and the challenges posed by Russia’s war in Ukraine. The IMF reckons that by 2024, output across the emerging world will probably remain more than 5% below the pre-pandemic trend, while that in rich economies will be less than 1% below trend (and output in America will be above it).

Yet higher global inequality is also the outcome of a happier development. Recent work by Ravi Kanbur of Cornell University and Eduardo Ortiz-Juarez and Andy Sumner of King’s College London suggests that measured global inequality may rise in steady fashion in the years ahead for much the same reason it fell in recent decades. While the emerging world as a whole has gained ground on rich countries since the 1980s, the lion’s share of the reduction in global inequality over that time was attributable to the rapid economic growth of China and India. GDP per person in China now stands at roughly the global average—a milestone India may reach in the 2030s. As incomes in those countries cross that threshold, their continued growth will become a source of increasing, rather than decreasing, inequality.

The enrichment of two countries that are home to more than a third of the world’s population is undoubtedly one of the big economic success stories of the past four decades. It has the unfortunate effect, however, of making the disappointing progress of those at the lower end of the income distribution more apparent.?

All our stories relating to the pandemic can be found on our coronavirus hub.

Even outside America, inflation is starting to look entrenched 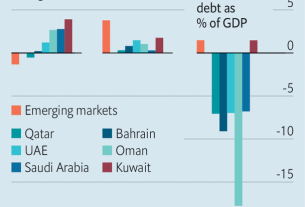