It’s been a better week for equity bulls. Indications of peak misery among fund managers were grasped as evidence that things can only get better, and the S&P 500 SPX, +0.99% is up 4.4% over just the last three sessions.

“We don’t expect a sustained improvement in market sentiment until investors get greater clarity on the outlook for the economy, central bank policy, and political risks. Uncertainty in all of these areas remains elevated, in our view,” wrote a team of strategists led by Mark Haefele, global wealth management chief investment officer.

So, what to do? Adopt a four-pronged strategy that should prove resilient under various downbeat scenarios, they say.

First off, invest in value. “Inflation is set to remain above central bank targets in 2022. Based on analysis from 1975, value sectors tend to outperform growth stocks when inflation is above 3%, which is likely to be the case for some time,” says UBS.

Under a soft landing scenario investors should favor value’s cyclical sectors, including energy XLE, -1.75%. Look at the U.K. market EWU, +0.41% UKX, +0.32%, which is highly weighted to value plays. The pound GBPUSD, -0.27%, currently around $ 1.20, sits near the lows of a multi-decade range, adding to the bargains. 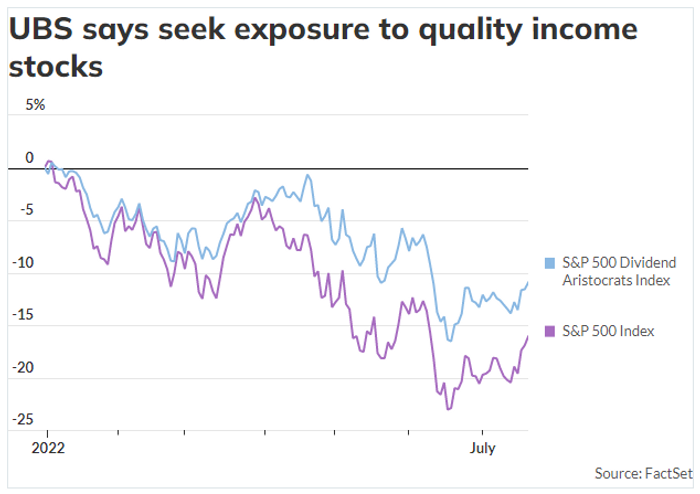 Second, pick up defensives and quality to protect against a more damaging downturn, they say. “We believe investors should add exposure to quality-income stocks, the healthcare sector, resilient credits, and the Swiss franc.”

Next, investors should ensure their portfolio has sufficient liquidity to take advantage of opportunities and diversify. “This will likely consist of a mix of cash, cash alternatives, and short-duration bonds. Investors should also ensure an adequate allocation to hedge funds, which have the potential to deliver performance, even if both bonds and equities are falling.”

Finally, position for the era of security as the fallout from the Ukraine war encourages governments to prioritize safety and access to supplies over considerations of price and efficiency. This is likely to make as diverse a selection as energy, food and cybersecurity more attractive, UBS concludes. 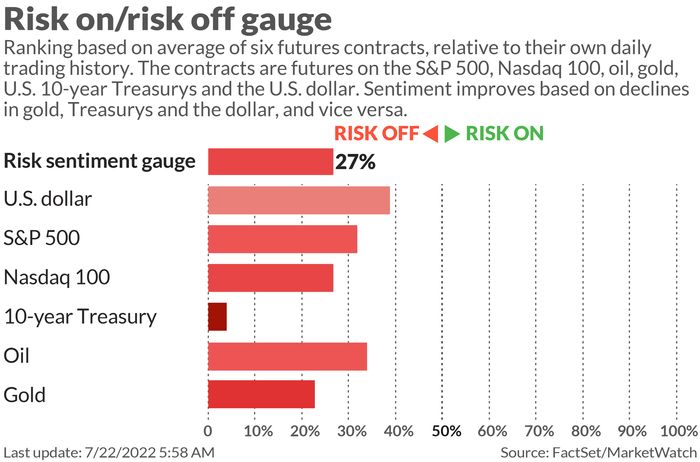 Shares of Alphabet GOOGL, +0.39%, which owns Google, and Meta META, +0.04%, which owns Facebook, are down sharply in premarket trading after Snap SNAP, +5.42% warned of a slowdown in digital advertising. Such is the uncertainty, Snap declined to offer guidance on earnings and its stock plunged 31.7% to $ 11.18.

The euro EURUSD, -0.44% fell back toward dollar parity, losing 0.4% to $ 1.0190, after surveys showed Germany’s manufacturing and service sectors contracting in July.

U.S. wheat futures W00, -2.08% fell 2.5% to $ 7.86 a bushel, back below levels seen before Russia’s invasion of Ukraine, as hopes rise that a deal will soon be signed to resume exports of Ukrainian grain.

The U.S. Markit PMI manufacturing and services surveys are set for release at 9:45 a.m. Eastern

Tesla TSLA, +9.78% shares jumped 9.8% on Thursday after revealing well-received results. Elon Musk’s carmaker now has a market value of $ 885 billion. That’s more than the next 11 biggest automakers combined, suggesting Tesla will thoroughly dominate the EV space in the future. The table below shows what analysts at S&P Global Mobility think will happen to the sector in coming years.

Here were the most active stock-market tickers on MarketWatch as of 6 a.m. Eastern.

Best of the web

The cloud boom is coming back to Earth.

The great resignation started long ago.

Five takeaways from the eighth hearing of the Jan. 6 committee

These golden sinkholes are ravaging a town.

A piece of legislation is blamed for an increased shark presence.

Dead suns are colliding, and no that’s not an indie rock band.

The latest target of sanctions on Russia is a motorcycle gang.

Need to Know starts early and is updated until the opening bell, but sign up here to get it delivered once to your email box. The emailed version will be sent out at about 7:30 a.m. Eastern

The Moneyist: I successfully renovated a condo building. My new husband offered to manage my next project — and it all went horribly wrong

The Tell: Why the S&P 500’s bull-market run probably is only getting started

Retirement Hacks: Need a graduation gift for your high schooler? Give the gift of financial literacy