U.S. stocks on Wednesday were attempting to build on a big and broad Tuesday bounce, but skeptics aren’t yet convinced the move is more than a bear-market rally.

Market internals were robust, Dempter acknowledged, which suggested buyers were urgently snapping up stocks as the NYSE TRIN, or Trading Index, a breadth oscillator that measures internal market strength or witness, hit .369 and the Russell 3000 percentage of advancers and up volume came in at their highest since the COVID-19 lows in 2020. Data has shown large speculators, mostly hedge funds, had moved net short on S&P 500 index futures, which typically sets the stage for solid forward returns, he noted, alongside other factors that typically point to near-term gains.

That may set the stage for further gains, with the S&P 500 capable of making a run toward resistance around the 4,000 level, Dempter wrote. It isn’t enough, however, to sound the all-clear on a bear market that still has the large-cap benchmark nursing a year-to-date loss of more than 17%.

“Calls for a market bottom are sure to occur after days like yesterday, but we don’t think the market is out of the woods yet and still consider this a bear market rally,” Dempter wrote. 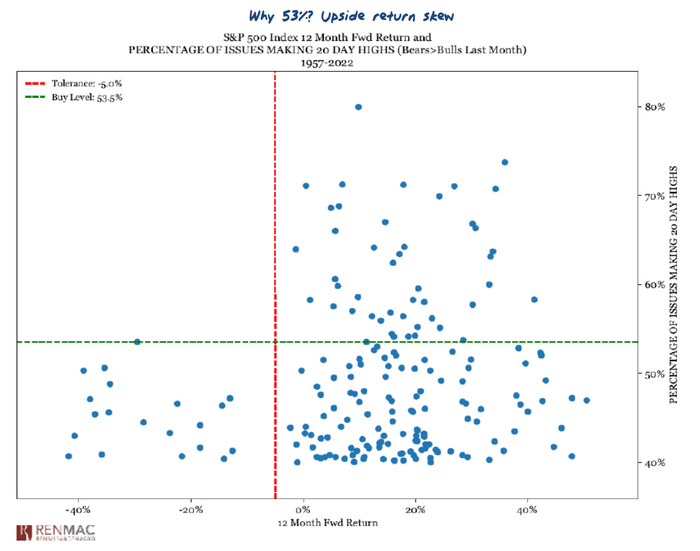 What would it take to signal the lows are in? Dempter said RenMac would be looking for a “thrust” in the percentage of stocks in the S&P 500 making 20-day highs above 53% (see chart above) and the percentage of issues trading above their 20-day moving average greater than 93%, with both measures currently running shy of those levels.

While breadth has been showing significant improvement, there are still more stocks making new 52-week lows rather than new 52-week highs, while less than half the market was trading above its 50-day moving average, noted technical analyst Andrew Adams, in a note for Saut Strategy.

That makes it “premature to assume the bear market is definitely over; yet the better response lately at least allows us to take a few more chances buying stocks now that the winds are picking up,” he wrote.