The U.S. might fall prey to recession in the near future, but it isn’t entering one now and any such talk of a shrinking economy would be “fake,” in the words of one analyst.

Worries about recession have exploded in the past several months as inflation kept rising and the Federal Reserve adopted a more aggressive strategy to increase interest rates. One poll shows more than half of the public thinks the U.S. is already in recession.

That’s not a big surprise. Rising rates tend to slow the economy — or worse.

The past 10 U.S. recessions, for example, have taken place during or right after a recent Fed cycle of raising rates, according to research by Jefferies LLC. 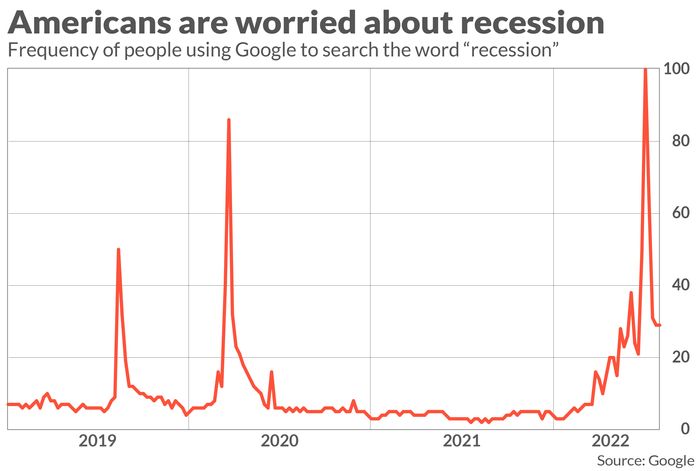 Adding tinder to the fire, the U.S. economy contracted in the first quarter for the first time since the onset of the pandemic. Additionally, gross domestic product, the official scorecard for the economy, could shrink again in the second quarter.

Rarely has GDP shrunk for two quarters in a row without a recession being declared. The only time in U.S. history that happened was in 1947.

IHS Markit, one of Wall Street’s premier GDP forecasters, predicts the economy is likely to shrink at a 1.9% annual pace in the second quarter. The Atlanta Federal Reserve’s GDPNow tool also estimates GDP contracted 1.5% in three months running from April to June. The report comes out July 28.

Yet an economy is far more complex than just headline GDP, analysts caution.

The group of prestigious economists responsible for declaring official recessions takes into account six major factors, such as the health of the labor market as well as household income and spending.

By those measures, the U.S. is definitely not in a recession. Far from it.

The economy has added an average of 375,000 a month in the second quarter, for instance, to keep the unemployment rate close to a half-century low of 3.6%. Job openings are also near a record high.

Lots of people working and making money means lots of spending — the thing the economy needs to avoid or put off recession as long as possible.

“It would be tough to say we have a recession with 3.6% unemployment,” said Fed. Gov. Chris Waller, who’s been pushing for faster rate increases to try to squash inflation. He said the Fed has to do whatever it takes to pop the inflation bubble.

Wages incomes, for their part, have risen strongly and consumer spending is on track to advance about 8% in the second quarter.

Granted, high inflation has negated most or all of the increase in incomes and spending this year, but both usually fall sharply during a recession.

All these relatively healthy vital signs suggest a 2022 recession would be “fake,” said Aneta Markowska, chief economist of Jefferies.

“Put differently, the current recession exists purely in the imagination, not in the real world,” she said in a new research report.

Marketkowa is no Pollyanna. A recession is all but certain, she contends, because of how high the Fed will likely have to raise interest rates to squelch inflation. The cost of living has surged 9.1% in the past 12 months — a nearly 41-year high — from less than 1.5% at the start of 2021.

The reason? The economy, though slowing, is in decent shape by most measures. The details of the GDP report, especially on incomes and spending, also show an economy that is still expanding.

The biggest negatives in the first and second quarters have come from a large trade deficit — Americans are buying record imports — and businesses replacing inventories at a slower pace.

Consumers and businesses, on the other hand, are still spending and investing. Those are the two biggest pillars of the economy.

“The short answer is no, we are not in recession,” said David Berson. “In the current period, GDP is giving us a misleading indication of the underlying economy.”

Of course, the economists at the National Bureau of Economic Research could decide the current consensus is wrong and ultimately declare a recession if clear evidence emerges.

The NBER rarely if ever makes such declarations quickly, preferring to wait long after most of the evidence is in.