While the jumbo rate hike received much of the attention, Powell’s other comments on inflation cemented another important reality for markets.

And that reality is: crude oil prices rank among the most important macro factors for stocks and bonds, since a further decline in oil and commodity prices could be the one thing to mitigate the Fed’s rate-hike plans.

“The message from the June 15 press conference is that as oil goes, so does the Fed… and so may all other assets,” said Marko Papic, partner and chief strategist at Clocktower Group, in a recent research note.

During a follow up call with MarketWatch, Papic added: “If oil prices come down, Jay Powell has given himself an out. The setup is beautiful.”

So, what will it take for oil prices, and prices of other commodities, to continue to fall?

According to Papic, this will require a further deterioration in demand, which he expects will arise out of China as the world’s second-largest economy continues to slow. But slowing growth alone likely won’t be enough: there must also be a moderation of geopolitical factors, like the war in Ukraine, which has helped drive commodity prices dramatically higher this year.

For years, higher oil prices were good for stocks, since higher oil prices meant the economy was strong and so were equities. But once oil prices rose too high, it became a problem for markets since the Federal Reserve essentially has been forced to react to inflation by raising interest rates to try and provoke demand destruction.

An unfortunate reality for the Fed is that central banks can’t directly control oil prices. Fed Chairman Jerome Powell, instead, can be ready to react when they finally start to come down. Because slowing growth is a contributing factor, the Fed will have reason to shift its focus from inflation back to growth, when commodity prices allow it. 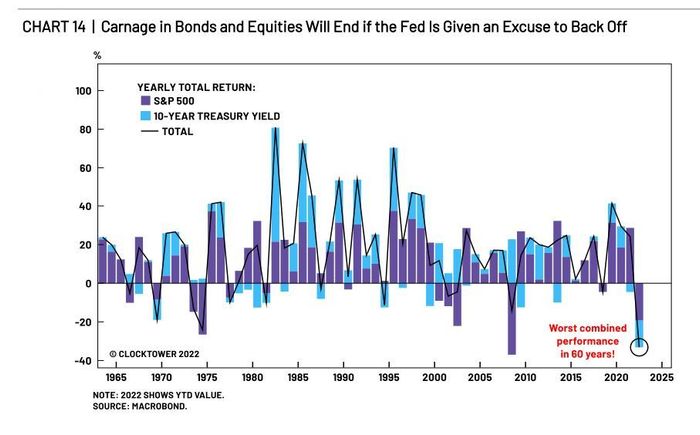 The sharp rise in oil prices this year has been disastrous for stocks and bonds. SOURCE: Clocktower

While stocks and bonds in 2022 have experienced their worst combined performance in 80 years, there may be room for that to unwind if Russia’s war in Ukraine reaches a period of a stalemate.

Read: A rare selloff for both stocks and bonds slammed investors. Will the 60-40 portfolio survive?

Crude oil prices CL00, -0.29% rebounded on Thursday, but prices for the U.S. benchmark are down nearly 15% over the past month, and many market strategists have attributed the recent bullishness in stocks to the pullback in commodity prices. U.S. stocks cemented a fourth day of gains for both the S&P 500 SPX, +1.50% and Nasdaq Composite COMP, +2.28% on Thursday, while Treasury yields rose, with the 10-year yield TMUBMUSD10Y, 3.002% popping back above 3%.

See: Why crude released from U.S. oil reserves may have ended up being exported overseas

Outside the Box: Should I do an online will? Avoid these pitfalls

Where Should I Retire?: I want to retire in ‘a liberal-thinking area’ on $3,000 a month, including rent — where should I go?