Two years ago scarcely anyone in mainstream finance had heard of Sam Bankman-Fried, or ftx, the cryptocurrency exchange he launched in 2019. Both gained greater prominence, first as the crypto craze reached fever pitch and then as crypto fell to Earth. Mr Bankman-Fried (widely known as sbf) has lately been at the centre of attempts to rescue beleaguered firms. To some observers, the role calls to mind the rescue missions organised by John Pierpont Morgan and America’s other banking scions in the early 20th century. The comparison is surprisingly instructive.

The recent slump has left destruction in its wake. Some crypto-lending firms, notably Celsius, have collapsed; some stablecoins, like terra, have been obliterated. At least one crypto hedge fund, Three Arrows Capital, has gone bust. Estimates of sbf’s personal wealth have tumbled, too, from $ 26bn just over three months ago to nearer $ 8bn now. Nonetheless, his companies (ftx and Alameda, a trading firm) seem to be the great survivors of the recent chaos. ftx had kept employee numbers relatively low; sbf has said the exchange is still profitable. Well-timed funding rounds early this year saw its global and American arms raising $ 400m each. That has enabled sbf to help others in need. In June Voyager Digital, a broker, secured loans worth $ 485m from Alameda. BlockFi, another trader, has received a revolving line of credit from ftx’s American arm.

To some this harks back to America’s banking panic of 1907. The economy was in recession; towards the end of that year the thinly capitalised Knickerbocker Trust Company, one of America’s largest financial firms at the time, collapsed. J.P. Morgan went on to orchestrate a series of private rescues with other financiers, offering deposits in the tens of millions of dollars to various banks in order to prevent runs. Those actions are usually credited with preventing a deeper, more damaging crisis. No other trusts went under.

At first glance, then, the comparison is a flattering one for sbf. But 1907 was not the Morgan family’s only attempt at a big bail-out. When the Wall Street crash struck in 1929, J.P. Morgan junior, like his father, sought to bring together a gang of plutocrats to stem the tide. Several bankers and brokers pledged to buy $ 125m in stocks, equivalent to around 0.1% of America’s gdp at the time (which would be about $ 27bn today). The plan failed miserably. The purchases perhaps pushed out the stockmarket’s collapse by a few days, but did not prevent it imploding. The Dow Jones Industrial Average index of stocks fell by around 35% between early September 1929 and the end of the year. By its nadir in 1932, it was almost 90% lower.

Historians are divided over why one intervention worked but not the other. Perhaps the panic in 1929 was too far gone for private purchases to make a difference, for instance. Other research suggests that the success of 1907 may have been overplayed, and that it was action by the Bank of France to calm domestic markets that spilled over to America and halted the mayhem. The debate suggests that identifying sbf’s role in quelling chaos today may be just as hard. The rout could simply continue; conversely, what might look like a success for sbf may in fact reflect something else.

A cynic might point out that sbf might be striking deals with other crypto firms not because he wants to save the industry from collapse, but because he has spotted an opportunity to snap up some of his competitors’ operations for pennies on the dollar. On July 1st Zac Prince, BlockFi’s chief executive, said that the firm’s credit line from ftx had been increased to $ 400m, and included an option to acquire BlockFi for up to $ 240m. That looks like a bargain compared with the valuation of $ 5bn that BlockFi was reportedly seeking during a fundraising round last year.

Even if sbf is not attempting to save crypto, though, history remains relevant. The banking panic of 1907 was a proximate reason for the creation of the Federal Reserve and the beginnings of the progressive taxation of income in America, as well as a big expansion of antitrust law. Instead of being hailed as a hero Morgan senior became the focal point for concerns that power was excessively concentrated in the hands of a small number of financiers.

Now, too, there is a possibility that chaos leads to more stringent oversight, particularly if the volatility in digital assets spills over to other markets, galvanising regulators. Boosters may see a J.P. Morgan in Sam Bankman-Fried and ftx. They might come to regret needing one.

Read more from Buttonwood, our columnist on financial markets:
What past market crashes have looked like (Jun 30th)
How attractively are shares now priced? (Jun 25th)
Is trading on America’s stockmarket fair? (Jun 16th) 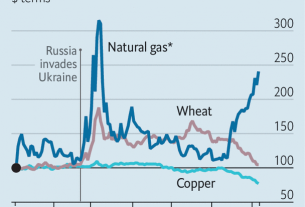 Do cheaper commodities herald a recession?