Fears of a sharp slowdown are getting the blame for the stock market’s renewed slide while also driving a retreat in Treasury yields. A look at a regional Fed bank’s closely followed economic-growth indicator may justify investor jitters, said a top Wall Street researcher.

The Federal Reserve Bank of Atlanta’s GDPNow model on Friday forecast a 2.1% second-quarter fall in U.S. gross domestic product following a slide in the Institute for Supply Management’s June manufacturing index and data on construction spending. The Atlanta Fed had lowered its estimate Thursday to -1% from a rise of 0.3% after data on personal consumption and expenditures, tripping alarm bells for recession-wary investors.

If the forecast is on track, it would mark the second consecutive fall in GDP after a 1.6% contraction in the first three months of 2022.

“We are ending Q2 on an economic low note, which goes a long way to explaining why 10-year Treasury yields TMUBMUSD10Y, 2.894% have come in so dramatically from their June 14th highs of 3.48 percent,” wrote Nicholas Colas, co-founder of DataTrek Research, in a Friday note.

“Stocks have taken no comfort from the recent decline in yields because they see the same issue portrayed in the GDPNow data: a U.S. economy that is rapidly cooling,” he said.

The 2-year TMUBMUSD02Y, 2.836% and 10-year Treasury yields fell below 3% on Thursday after hitting a 11-year high earlier this month as the odds of a recession appeared to be growing. Treasury yields move opposite to price. 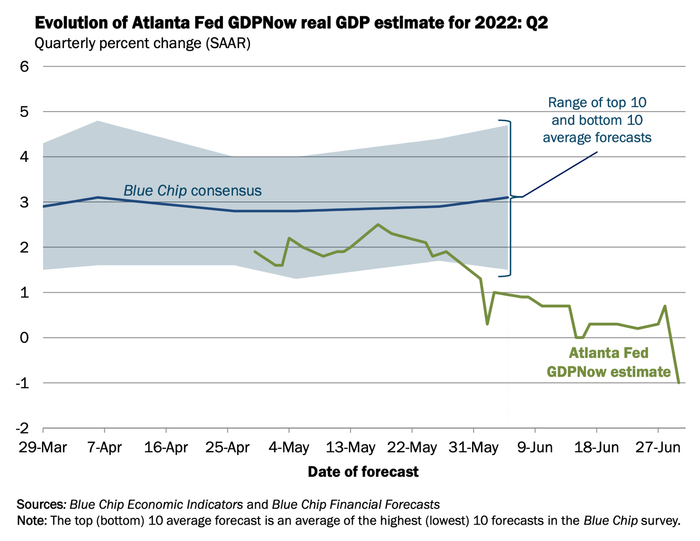 The Atlanta GDPNow is updated in real time as fresh economic data rolls in, using a methodology similar to that employed by the Bureau of Economic Analysis in its official gross domestic product forecast. It’s not an official Atlanta Fed forecast, but it is a widely watched indicator and “important to watch” as “it has a strong track record, and the closer we get to July 28th’s release the more accurate it becomes”, according to Colas.

“The model’s long-run track record is excellent,” he wrote. “Since the Atlanta Fed first started running the model in 2011, its average error has been just -0.3 points. From 2011 to 2019 (excluding the economic volatility around the pandemic), its tracking error averaged zero.”

Though a second consecutive quarter of negative growth of the U.S. economy would meet a generally-used definition of recession, the National Bureau of Economic Research (NBER), the official arbiter of U.S. business cycles, uses different criteria. The NBER’s definition of a recession is that “it is a significant decline in economic activity that is spread across the economy and that lasts more than a few months”.

Read More:The Dow just booked its worst first half since 1962. What history says about the path ahead.

TaxWatch: Most people couldn’t correctly answer this pandemic-related tax quiz. Can you do better?