The United States Supreme Court may be looking to strike down Roe v. Wade, the landmark abortion ruling from 1973, according to a now-authenticated leaked draft majority opinion published on Politico.

“Roe was egregiously wrong from the start,” Justice Samuel Alito wrote in the majority opinion draft. “We hold that Roe and Casey must be overruled,” he went on to say, citing a 1992 case that affirmed the 1973 Supreme Court decision.

With the possibility that Roe v. Wade could be overturned, it’s worth taking a look at how Americans feel about the ruling, and about abortion as an issue.

The polling data is pretty clear that a majority of Americans think that Roe v. Wade should not be overturned. According to a January poll from CNN, 69% of Americans want to keep Roe v. Wade intact, while just 30% want the ruling completely overturned.

See also: We don’t know who the Roe v. Wade leaker is. But the organized, focused and well-funded Republicans may have just won again

This position is not a recent change, either, as support has remained fairly consistent for more than 20 years. Since 1989, between 52% and 66% of U.S. adults have said they want Roe v. Wade to remain, according to polling conducted and compiled by Gallup.

When asked if abortion should be legal in the first trimester, 61% of Americans agree, a slight drop from the 69% of Americans who say they support Roe v. Wade. A majority of Americans also say that abortions in the second and third trimesters should be illegal in almost all cases, according to AP-NORC data.

Only 1.3% of abortions are performed at 21 weeks of gestation or later, according to the American College of Obstetricians and Gynecologists.

See also: Who is the richest person in the world? Jeff Bezos no longer owns the top spot.

A more comprehensive view of how Americans feel about abortion and when it should be allowed can be seen below. 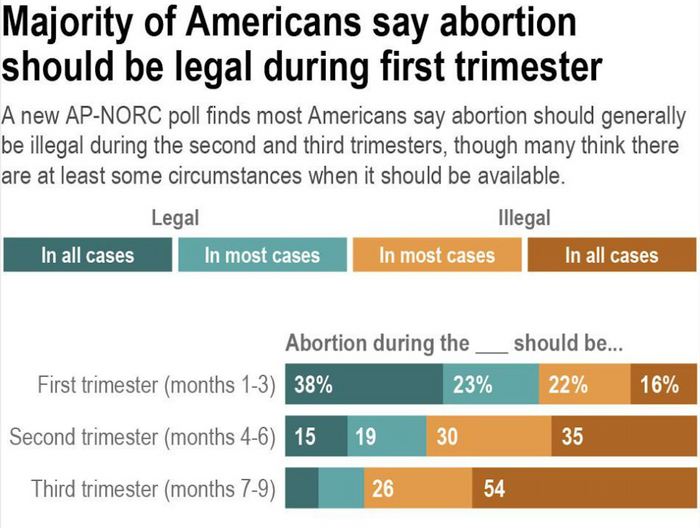 Results based on interviews with 1,125 U.S. adults conducted June 10-14. The margin of error is 4.2 percentage points for the full sample.

Abortion is a complex issue that is often reduced to two sides, but Americans’ feelings on the matter are more nuanced.

“What it speaks to is the fact that the debate is dominated by the extreme positions on both sides,” Barbara Carvalho, a pollster at Marist, said in 2019. “People do see the issue as very complicated, very complex. Their positions don’t fall along one side or the other.”

Some political analysts have argued that any attempt to overturn Roe v. Wade by the conservative majority on the Supreme Court could result in a boost for Democratic turnout in November’s midterm elections, but voters in recent years have not identified abortion as a top issue. Among registered voters in the 2020 election, abortion ranked 12th highest on a list of issues “very important” to their vote, according to Pew Research, behind other issues such as climate change, gun control and immigration.

The idea of overturning Roe v. Wade has already drawn pushback from Democrats, including President Biden, who responded to the news by calling for voters to “elect pro-choice officials this November,” and Senate Majority Leader Chuck Schumer, who indicated he would hold a vote on legislation to codify the right to an abortion into federal law.

Republicans, including Senate Minority Leader Mitch McConnell, criticized the leak of the document more broadly instead of its contents, calling it a “toxic stunt.”

What's Worth Streaming: Here’s what’s worth streaming in June 2022 — and why Netflix, Apple and Disney are the best bets

The Moneyist: ‘He has a greedy daughter’: I want to leave my home to my daughter, but I would also like to continue receiving income from my husband’s properties if I die before him