Wariness is in order after the S&P 500’s bear-market finish and a potential 75 basis-point Fed hike just one day away. Gains for stock futures and a potential bounce are fading fast.

Morgan Stanley’s Mike Wilson, who can count some wins after pounding the table this year over a gloomy stock setup, told clients on Sunday that the S&P is “headed toward 3,400 before a more tradable low is in.”

“With growth now the main risk to stocks, our focus remains on names that can deliver on earnings in a very difficult environment for many companies to navigate,” said Wilson. “We continue to like classic late-cycle winners – defensives and energy – and companies with high operational efficiency.”

Plus: Everything you wanted to know about a bear market, but were afraid to ask

Also in the camp of prescient calls is The Kobeissi Letter’s editor in chief and founder Adam Kobeissi. In a June 6 newsletter, (shared on this column) he warned followers that 4,090 would mark a “battleground level” for the S&P 500, and failing that was a clear path to 4,050.

He had a stop loss set at 4,160, which marked the exact top for the index before the big pullback set in.

Sharing his latest thoughts in our call of the day, Kobeissi returns with a warning of more medium-term downside ahead, and no stock bottom until we see some classic signs:

“At a high level, we have yet to see a real VIX VIX, -2.12% spike yet and panic selling has not set in year. Generally speaking, we do not see bear markets bottom without panic selling, similar to what was seen in 2001 and 2020,” he told MarketWatch on Monday. “Historically speaking, no bear market has ever bottomed without a VIX reading of 45 or more.”

And possibly even a limit-down day on the S&P 500 would help build a bottom case, he adds.

In the near term, he sees some modest signs of an oversold market that’s trading below the 3,846 daily bottom Bollinger Band, with a daily RSI nearing 30.

The Relative Strength Index, or RSI, evaluates whether an asset is oversold or overbought, with sub 30 indicating the former. The Bollinger Band is a momentum indicator that also measures those conditions, along with market volatility.

Kobeissi expects pressure on the S&P 500 until Wednesday’s Fed decision, when “buy the news” action may initially lift stocks, but “lose-lose” fundamentals will force selling of any rips. So a relief bounce into 3,860, or even 3,950 is possible before “more weak longs are trapped and we head lower toward 3,500.”

Indeed the Fed is in a tight spot, he says.

“If the Fed raises rate aggressively, then markets fall on recession fears, and if the Fed pulls back on their hawkish tone then markets fall on inflation worries,” said Kobeissi, adding that the central bank will “remain pedal to the metal this week and for the rest of this year as they have no option.”

Bank of America’s just-published monthly fund manager survey has a few interesting bits, such as more investors than any time since the Great Financial crisis expect inflation will decline in the next year.

Also read: Here’s how big investors were positioning for stagflation, even before the latest ghastly inflation reading

Elon Musk plans to directly address Twitter TWTR, -5.00% workers this week, the first time since the Tesla TSLA, -7.10% CEO launched his $ 44 billion takeover for the company.

Coinbase COIN, -11.41% was set to extend a slide Tuesday after a J.P. Morgan analyst abandoned his bullish call in the wake of an “extreme decline” in cryptocurrency prices.

Continental Resources stock CLR, -8.50% is surging after the oil and gas exploration group got a proposal to be taken private by Harold Hamm.

Oracle stock ORCL, -4.60% is climbing after results showed a shift of the tech company’s business to the cloud was paying off.

Nokia shares NOK, -2.77% are up after Citi lifted the Finnish telecom equipment maker to buy from neutral and upped its price target to €6.50 from €6. Analysts said markets are ignoring improving fundamentals for the group.

Apart from the kickoff of the Fed’s two-day meeting, a survey of small businesses showed confidence stalled in May. And wholesale prices jumped again, signalling still-intense inflation in U.S. economy 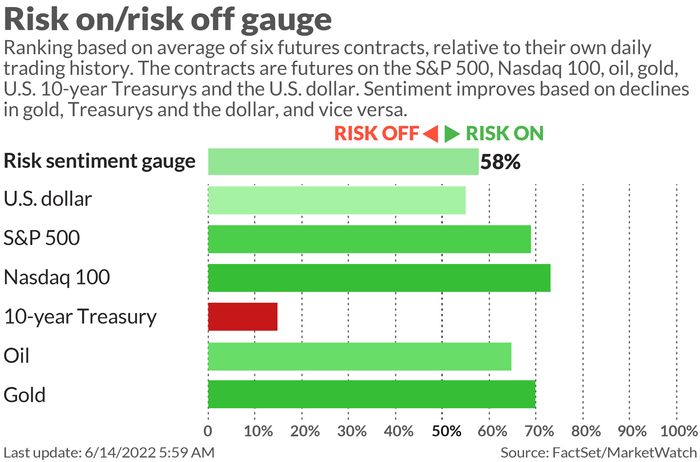 These were the top-searched tickers on MarketWatch as of 6 a.m. Eastern:

Marilyn Monroe’s iconic ‘Happy Birthday’ dress is apparently worse for wear after Kim Kardashian took it for a spin at the Met gala.

Don’t try this anywhere. Youtuber criticized for camping on a cliff edge.

: Is renting cheaper than owning a home? Here’s the answer in America’s 50 biggest cities