With inflation rates sticking at 40-year highs, people keep getting pelted by the old chestnut about a dollar not going as far as it used to.

Just ask anyone who’s recently purchased a slab of bacon or a dozen eggs, among other household staples.

A person who paid for the breakfast products in May 2021 would need to pay an extra buck apiece to get the same amount of eggs and bacon in May 2022, according to Friday inflation data.

The Bureau of Labor Statistics’ closely-watched Consumer Price Index is mainly about price percentage increases — and Friday’s read showed steep ones for May.

There was a 1% increase in overall costs for consumers goods and services, month to month, surpassing analyst expectations, and an 8.6% increase year-over-year, according to the agency. All three stock market indices ( DJIA, -2.73%, SPX, -2.91% and COMP, -3.52% ) were down sharply after the hotter-than-hoped May numbers landed.

The CPI data also included average dollar costs on certain commodities. A look through the numbers serves as a reminder that inflation may be about prices increasing — and it’s also about purchasing power decreasing. Especially at a time when wage growth isn’t keeping pace.

Which gets back to the eggs.

So if a customer tried paying $ 1.62 for eggs now, they’d be getting approximately 43% fewer eggs through their diminished purchasing power. 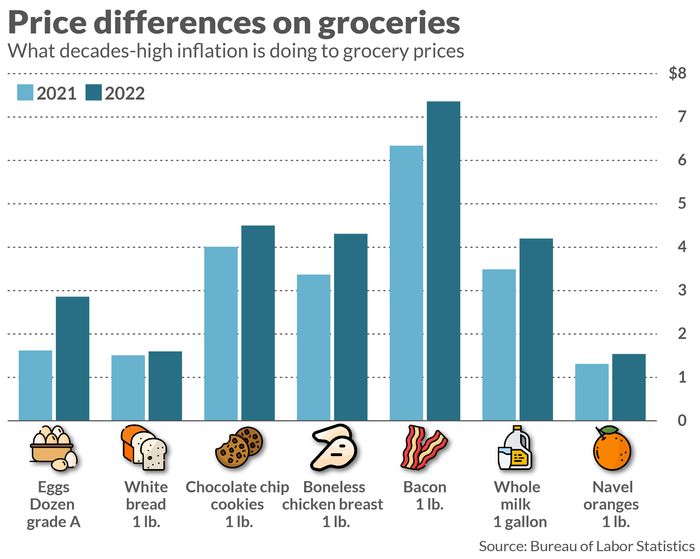 Though equal amounts of goods are costing more now than a year ago, consumers are increasingly coping with “shrinkflation” too, where packaging gets smaller while prices stay where they are. Manufacturers shrink packages in the hope that consumers won’t notice they’re essentially paying more for less.

To be sure, the story of inflation at this point is its spread to many parts of life beyond the grocery store.

The question is whether and when consumers are going to scale back their spending because the sticker price is simply too high.

One widely-watched consumer sentiment reached a record low on Friday as people braced for high inflation to stick around.

In the past, the low consumer expectations “would have been consistent with a hefty outright decline in real consumers’ spending,” according to a Friday note from Ian Shepherdson, chief economist at Pantheon Macroeconomics. “But we see no sign of that right now.”

Shepherdson has a theory for the split between consumer mood and spending. It’s “probably because consumers in aggregate are sitting on an extra $ 3.5 [trillion] in bank accounts and money market funds, relative to what we would have expected in the absence of the pandemic,” he said.

Capitol Report: ‘Hate can have no safe harbor in America,’ Biden says as he meets Asian-Americans in Atlanta after shootings

Market Snapshot: The stock market hasn’t been this stomach-churning in December since 2018. Here’s the set up for the year’s final week