Iconic hip-hop artists are rarely mentioned alongside Warren Buffett or Benjamin Graham as sources of investing wisdom. But Wu-Tang Clan’s 1994 hit “C.R.E.A.M.” immortalised a saying all investors should be familiar with: Cash Rules Everything Around Me.

For much of the post-pandemic boom in equity markets, cash and the gauges of corporate valuation that are associated with it were deeply out of fashion. Money was cheap, nearly free, particularly for technology companies. Investors tripped over each other to finance fast-growing startups with only the fuzziest plans for achieving profitability. Some large listed companies reached absurd valuations relative to their ability to generate cash.

That has changed dramatically over the past six months. As interest rates have risen, reducing the present value of future profits, a company’s ability to generate cashflows today has become relevant again. This is perhaps causing the most upheaval in tech, where many stocks are priced for profit growth well into the future.

That technology stocks have led the recent sell-off is well-known. But the shift goes deeper, as an analysis of their average free-cashflow yield in 2019-21 reveals. This measure takes the money a company generates (after operating expenses and capital investment are accounted for) and divides it by its market capitalisation, providing a gauge of the size of its cash streams relative to market value. Take global listed tech firms that were worth more than $ 1bn at the start of 2020, and divide them into two groups: the hares, whose valuations raced ahead of their cash-generating ability, resulting in below-average free-cashflow yields; and the more plodding tortoises, with above-average yields. Between the end of 2019 and the peak of America’s nasdaq index in November last year, the share price of the median hare rose by around 24%; the tortoise, by 15%.

Since then, however, the hares have tumbled by around 22%, compared with only 8% for the tortoises. Over the two periods as a whole, the cheaper tortoises have outperformed their dearer peers by around six percentage points.

The division between the hares and the tortoises is not perfect—though Tesla, for instance, has fallen recently, it has still done spectacularly over the period as a whole, despite relatively low free-cashflow yields. Yet the trend is clear, and extends beyond tech, too. An American exchange-traded fund targeting the 100 companies in the Russell 1000 index with the highest free-cashflow yields is up by about 8% this year. The shift towards a cash-focused equity market will be felt most acutely in tech, however, precisely because it was where the excesses of the previous regime were so evident.

The beneficiaries of the new preference for cash generation include hardware firms, such as ibm and hp, the share prices of which have risen since November. These had free-cashflow yields of 10% and 12%, respectively—far above the 3% yield for tech firms worldwide.

The parts of the sector that will suffer are those where cash generation has long been a problem. Ride-hailing is a prime example. The share prices of Uber and Lyft, two American firms, and Grab, based in South-East Asia, are all down by 40-60% so far this year. Uber, which recorded negative free cashflow, on average, between 2019 and 2021, is very much a hare by our classification. Last month Dara Khosrowshahi, its chief executive, told employees that the company would now focus explicitly on generating positive cashflow.

There are other areas where the renewed attention to cash could pose a problem for tech firms in particular. The prevalence of stock-based compensation is one. Paying employees in stock options does not register in cashflow reporting in the way that conventional pay would, because it is a non-cash expense. Research published last year by Morgan Stanley, a bank, notes that the median stock-based payout of tech firms in the Russell 1000 runs to around 25% of cashflow (before capital investment), more than three times the level for any other sector. The same analysis finds that Amazon’s free cashflow would have been reduced by almost one-third in 2020 if stock-based compensation had been counted as cashflow.

These sorts of divergences may prompt investors to try ever harder to paint a more accurate picture of cash generation. With inflation running high and no immediate return to the era of easy money in prospect, cash could start to rule everything around tech.

Read more from Buttonwood, our columnist on financial markets:
The return of the inventory cycle (Jun 2nd)
Is China “uninvestible”? (May 21st)
Why Italy’s borrowing costs are surging once again (May 14th) 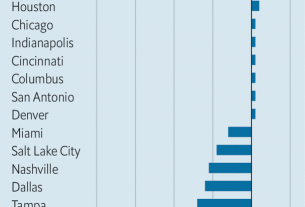