It is fashionable in some circles to lament the “cult of gross domestic product”. The pursuit of growth, this criticism goes, blinds officials to less quantifiable but worthier objectives, be it a contented population or a clean environment. For many economists, the concern about gdp is very different. They see huge value in the core mission of the measure: namely, to provide as timely and accurate a snapshot of the state of the economy as possible, a lodestar for governments setting policies and for companies making decisions. Their criticism instead is that gdp occasionally struggles to achieve this, and that better alternatives might exist.

This debate has again come to the fore in America because of an unprecedented gap between gdp and its close relative, gross domestic income (gdi). In theory the two ought to be aligned. gdp tracks all expenditure in the economy, summing up the market value of consumption, investment, government spending and net exports in a specific period. gdi tracks the earnings associated with that expenditure, summing up wages, profits and any other income. In reality the two never match up perfectly, since the long-suffering bean-counters in statistical agencies must draw on different sources, released at different times, to tot them up.

The gap between gdi and gdp (officially known as “the statistical discrepancy”) is typically about 1%. Since late 2020, however, the discrepancy has been much larger. In the first quarter of this year America’s gdi was fully 3.5% larger than its gdp. That is much more than a rounding error. As Ben Harris and Neil Mehrotra of the Treasury Department wrote on May 26th, when the latest gdi data were released, it results in remarkably different pictures of the economy. If gdp is the better reflection of reality, economic output is still about 2% below its pre-pandemic trend. If gdi is accurate, the economy is 1.2% above trend, a far stronger recovery.

One approach to reconciling gdp and gdi is just to split the difference. In 2015 the Council of Economic Advisers in Barack Obama’s White House laid out the case for doing so, calling the average the “gross domestic output” (gdo). The crucial point is that both gdp and gdi derive from entirely independent gauges of output. Combining them should, on average, reduce measurement errors. Mr Obama’s advisers found that gdo was an excellent predictor of later revisions to gdp. For instance, when gdo growth is half a percentage point faster than gdp growth, it is associated with a subsequent upward revision to gdp growth by roughly half a percentage point. This observation is slowly creeping into mainstream thinking. The Bureau of Economic Analysis has started publishing the simple average of gdp and gdi, though few journalists or analysts bother to mention it in their reports.

Accounting for the huge discrepancy at present is somewhat trickier. A useful starting point is the observation that the gdi–gdp gap opened up at the height of the covid-19 pandemic as the government’s stimulus flowed into the economy. The sudden infusion of cash through transfers to households and loans to businesses appears to have messed up conventional measures of economic activity. Corporate profits have been uncharacteristically strong, explaining the vigour in gdi. In principle that should have been mirrored in much more robust gdp readings, too.

Matthew Klein, the author of “The Overshoot”, an economics newsletter (and who worked at The Economist a decade ago), reckons that an undercounting of business investment in gdp may be the most likely cause. Statisticians have struggled to keep tabs on all the newfangled ways that companies spend money, from software to cloud computing. During the pandemic entire business models were upended to accommodate online shopping and remote working; it stands to reason that investment data may have failed to capture such spending.

Another possibility, running in the opposite direction, is that incomes have been overstated. Some people and even businesses may have mistakenly inflated their incomes, at least in a statistical sense. Dean Baker of the Centre for Economic and Policy Research, a left-leaning think-tank, noted back in 2011 that there was a correlation between asset bubbles and gdi. When the stockmarket soars, as it did during much of 2020 and 2021, gdi tends to outstrip gdp. Capital gains are not supposed to count as income in gdp calculations, as they reflect the prices of existing assets rather than production of new ones. But the pattern suggests that people sometimes may misreport capital gains as ordinary income.

Nerds to the rescue

The uncertainty about whether to blame the discrepancy on undercounted business investment or overstated income does seem to argue in favour of the simple gdi–gdp average as a measure of economic output. That, however, is not entirely satisfactory. In a paper in 2010, Jeremy Nalewaik, then an economist with the Federal Reserve, showed that gdi was generally closer to the mark than gdp in registering fluctuations in the business cycle. It did a better job of documenting the true extent of the downturn in 2007-09. Moreover, its outperformance relative to gdp over the past two years is also more consistent with the run-up in inflation. Policymakers who had paid more attention to gdi may have become more concerned sooner about economic overheating.

Frustratingly, initial gdi estimates come out a month after the first gdp figures. But researchers are on the case. In a paper published in January by the Cleveland Fed, economists pulled together gdp, gdi and a basket of monthly indicators such as the unemployment rate and average hours worked in manufacturing. The result, they hope, is something closer to “true gdp” that can be updated on a monthly basis. Encouragingly, it performed well in documenting the recovery from the pandemic. If it proves itself over time, it will be one more in a dizzying array of indicators to keep track of. But the message is clear: a focus on conventional gdp alone is unduly restrictive at best, and misleading at worst. ?

Read more from Free Exchange, our column on economics:
Should China spend more on infrastructure? (Jun 2nd)
How economic interdependence fosters alliances and democracy (May 28th)
How to unleash more investment in intangible assets (May 21st) 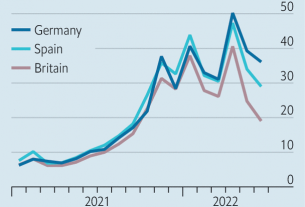 Can Europe keep the lights on this winter?