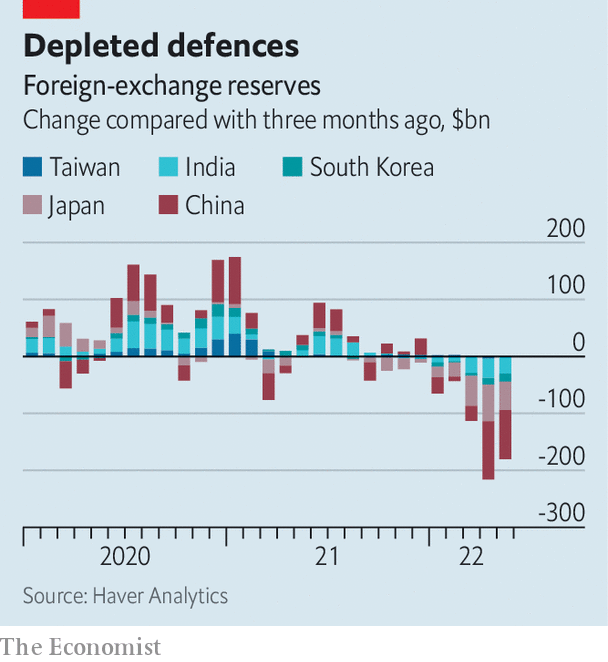 When the Federal Reserve raises interest rates, the effects are felt far and wide. Capital shifts in and out of the huge stock of global dollar-denominated assets. The Fed is expected to act forcefully over the next year, raising rates to around 3%, the highest level since early 2008. But this time the response of the biggest foreign holders of dollar assets, particularly those in Asia, could hold surprises. A burgeoning group of large private institutions is changing, and potentially complicating, the picture.

Ten years ago “official” foreign investors—mainly central banks managing their currency reserves—held $ 3.4trn in American Treasuries, about three-quarters of all Treasuries held abroad. Anyone wanting to understand the huge flows in and out of dollar bonds therefore kept an eagle eye on the big reserve managers.

There has been plenty of movement of late. China’s reserves—the largest single foreign stash of Treasuries—fell by $ 68bn in April, 2% of the total and the largest monthly drop in more than five years. Japan’s reserves declined by $ 31bn, the biggest-ever monthly fall. India’s reserves shrank by $ 26bn in March, the most since the market panic of October 2008. Those in South Korea and Taiwan have fallen, too.

Reserve managers are a tight-lipped bunch, and rarely explain precisely why their holdings have changed. But some of the recent declines are likely to reflect simple valuation effects. The dollar has strengthened; as a result, holdings denominated in other currencies, such as the euro, are worth fewer dollars. Some reserve managers have also intervened in the market by selling their holdings in order to limit currency depreciation.

Yet this presents an increasingly partial picture of capital flows. Asian private institutions that cater to ageing populations, such as pension funds and insurers, have exploded in recent years. The assets of Taiwan’s life insurers alone, for instance, have more than doubled in less than a decade. Rather like central banks, these tend to buy and hold safe government bonds and liquid corporate debt.

This divergence makes sense. Reserve managers get out of Treasuries when American interest rates climb, to protect their currencies from a stronger dollar. Private investors, enticed by juicier yields on long-dated bonds, dive in. Even quasi-public institutions like Japan’s and South Korea’s mammoth state-pension schemes have goals and risk tolerances that differ from reserve managers. Nonetheless, because most of the newly important institutions grew rapidly during a period of low inflation and rock-bottom interest rates, predicting their actions as circumstances change will not be easy.

Things are murkiest of all in China, where the aims of financial institutions and the government’s foreign-exchange managers can dovetail. In 2020 and 2021, for instance, China’s official reserves were curiously stable, raising analysts’ eyebrows. While most other Asian countries with large trade surpluses were reporting surging reserves, China’s rose by less than 5%. That raised the possibility that China was using its banks to intervene in the market: Alex Etra of Exante Data, a research firm, and Brad Setser of the Council on Foreign Relations, a think-tank, have pointed to the surging value of Chinese lenders’ net foreign assets as evidence of hidden intervention. So far this year, though, there is little indication that China has used its state banks to disguise intervention.

Interpreting the shifts in capital flows was hardly easy when it involved deciphering the actions of relatively taciturn reserve managers. The new, more crowded field of investors with various holdings, strategies and objectives will give analysts an even bigger headache. ?