“Even in the most brutal of bear markets, you get sharp, counter-trend rallies,” Sonders said in a phone interview Thursday. In her view, the stock market’s recent moves higher, like the one leading into Memorial Day Weekend, seem more like “a typical bear-market rally than the start of something new and prosperous.”

Breadth has weakened “considerably” this year for major stock-market benchmarks including the S&P 500, the technology-heavy Nasdaq Composite COMP, +2.69% and the small-cap focused Russell 2000 Index RUT, +2.31%, according to Sonders’ June 1 note on her mid-year outlook. A chart in her report, which tracks the percentage of stocks trading above their 200-day moving averages for each of those indexes, shows the market’s deterioration in breadth in 2022. 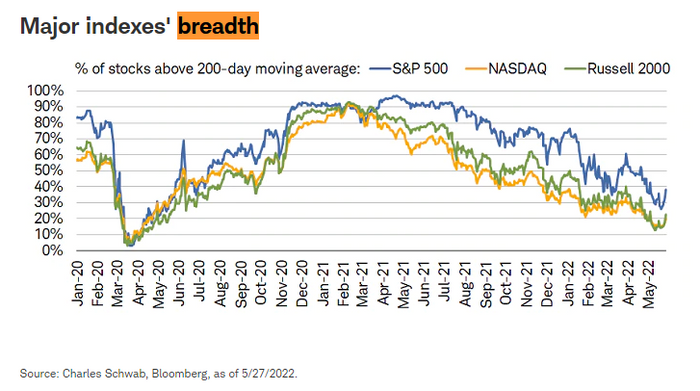 “Ideally, we want to see a very elevated percentage of stocks rallying together to feel more confident,” Sonders said in the note. While the percentage of stocks trading above their 200-day moving averages recently ticked up, “early stages of sustainable bull moves are typically marked by broader ‘breadth thrusts.’”

“Although the S&P 500 has so far escaped a traditional bear market based on the level of the index using closing prices, the weakness under the surface is clearly in bear-market territory,” Sonders wrote. “The Nasdaq, Russell 2000 and many of the speculation-driven segments of the market are definitively in bear markets.”

In a separate note Thursday, Liz Young, SoFi’s head of investment strategy, said she wants to see more signs of “breadth and strength” in the stock market before being persuaded that recent rallies are signaling that “we’re out of the woods.”

“What I want to see is a strengthening in performance from the other stocks in the index, ” she said, “which would give me more confidence that the market has more durability beyond the big names.”

In a stock market that has seen its worst start to a year since 1970, rallies in 2022 have been brief, with only three periods in which they lasted longer than three straight days, according to Young. “Although each is a welcome sigh of relief,” she said, “so far they’ve felt more like a game of catch and release.”

MarketWatch: ‘Society’s very existence could have been threatened’: Retired General Stanley McChrystal says the U.S. needs to ‘go to school’ on pandemics before we’re hit again

Washington Watch: Here’s what’s in and out of Democrats’ big social-spending bill — for now