This summer, Sergio Rosario Diaz is doing up his vacation plans — at least as much as possible when hot inflation rates rival the temperature.

There’s the flight from Virginia to Miami for him, his wife and 5-year old daughter. Then comes a day in Miami, followed by a four-day Disney DIS, +3.51% cruise. Then there’s another day back in Miami before the July vacation concludes.

“We decided to go big and we’ll do something she’s going to love,” Rosario Diaz, a 34-year-old social media marketer moving to Charlottesville, Va., said of his daughter. It’s going to cost Rosario Diaz and his wife at least $ 4,000.

Last summer, many Americans tried to figure the very personal art of the responsible splurge as mass vaccination opened up possibilities. This summer, they’ll have to figure out the inflation-themed sequel when the higher cost of living collides with the widely-shared urge to soak up the summer.

Rosario Diaz says his Disney experience will be worth the price. Besides, it’s still cheaper than the approximately $ 7,000 the couple spent last summer on gas, lodging and meals during road trips to Georgia, Louisiana, Tennessee, Florida, Washington, D.C. and elsewhere. 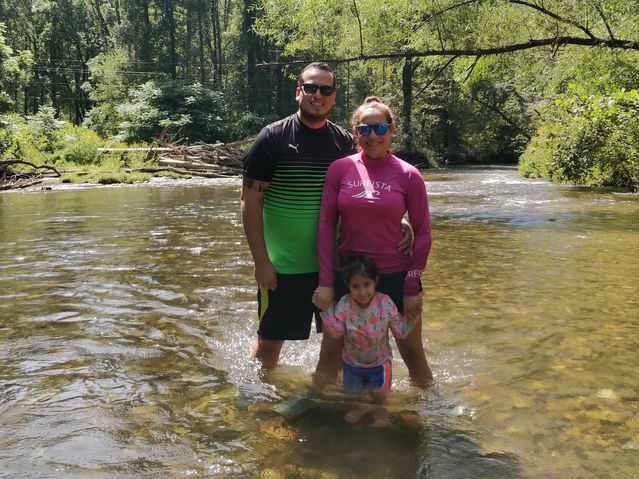 Sergio Rosario Diaz, his wife Lynmarie Rivera, and their daughter Stella at North Carolina’s Pisgah National Forest last year. When Rosario Diaz checked the current cost of lodging at a nearby cabin, it was more than double what he paid last year.

If they tried a 2022 repeat of last summer’s itinerary? Forget it. Rosario Diaz checked the current cost for an Asheville, N.C.-area cabin where he stayed a weekend last year. He spent around $ 450 on lodging at that time. It was more than double the cost this year.

Then there’s the cost of gas to get anywhere. On Friday, the national average cost fell a penny to $ 4.59/gallon from the new record of $ 4.60/gallon set a day earlier.

“I am saving money by taking a cruise,” said Rosario Diaz, the founder and creator of Soy Super Papa, a bilingual fatherhood organization. He tries to factor rising costs into his budget, but in his chats with other dads, Rosario Diaz hears they are ready to spend. “They say ‘I don’t care, I’m going to take a hit. I know it’s more expensive.’”

Vic Medina has also been doing some math about this summer. The 45-year-old entertainment manager living in Paramus, N.J. says he’s saving money by driving his family instead of taking a train when they spend two July weeks in Ocean City, Md. and Virginia Beach, Va.

Last summer was low key in a nod to COVID-19 precautions and because the family was devoting their cash then to home improvements, he said. This year, he’s willing to spend up to $ 10,000 on their upcoming vacation.

When it comes to summer plans, Vic Medina says, ‘I think it’s time to really embrace what we have.’

So Medina’s been taking some cost-cutting steps to prep for his big trip. “It went from Neiman Marcus to buying my first pairs of pants at Costco,” he told MarketWatch.

‘They are not even batting an eye’

Like so much else these past two years, there’s no one-size-fits-all indication on consumers’ willingness to spend on summer travel, camp and all around fun.

Some data suggest people are plowing ahead with their plans, no matter inflation’s temperature. Four in 10 people said they’re ready to spend more money this summer after the pandemic confined their plans, according to a CreditKarma survey.

The travel industry and airlines are expecting a brisk season, with “revenge travel” back with a vengeance. When travel advisors pull together summer trip packages these days, the prices can be 20% to 25% higher year over year, according to Zane Kerby, president and CEO of the American Society of Travel Advisors. That’s okay by clients, Kerby said. “They are not even batting an eye,” Kerby said.

But other data points hint at a pullback for some people.

For example, 51% of people said they’ve changed or cancelled plans for a family trip this summer because of high inflation, according to a survey from the National Parents Union, an advocacy organization for parents focused on the quality of life and schooling for children.

More Americans say their finances are in worse shape than last year, according to a Gallup poll in April. Inflation is the prime culprit for the pessimism, the poll data showed.

Walmart WMT, +1.97%, a big-time bellwether on consumer behavior, also sees mounting evidence that inflation is getting to people. In an earnings call this month following a profit that missed analyst expectations, executives at the retailer said they are seeing more customers opting for generic, store-brand products over national brand name options.

On Friday, the Federal Reserve’s preferred inflation metric showed a 6.3% rise in April, year over year. That’s actually a drop from the 6.6% year-over-year rate in March.

There are a lot of ways Yolanda Corbett could have put more than $ 2,000 to use, but she put it toward full-day camp for her 8-year-old son, Alexander. “The investment was well worth it in my opinion,” said Corbett, 40, a parent organizer for a nonprofit advocating for parents of children in the Washington, D.C. school system.

By the time Corbett heard of the spot at the Alexandria, Va. camp, she knew she had to jump quickly.

Other, cheaper city-run summer programs in Washington D.C. came and quickly filled up. “It’s almost a rat race trying to secure a space for your child,” she said — sometimes in the time it took to refresh a screen. “There goes your affordable option of making sure your child has access to experiences.”

Corbett, a single mother, didn’t want a repeat of last summer with Alexander and his brothers, ages 14 and 15, just hanging around with her, relatives and a close set of friends.

The camp was also a matter of childcare, Corbett noted. Now she needs to figure out what her teenage boys are going to do this summer — and where she’s going to find the money for it.

Day camps can cost up to $ 200 daily and it can be up to $ 500 a day at sleep-away camp, said Tom Rosenberg, president and CEO of the American Camp Association, a professional association that includes 2,500 accredited camps.

Prices are typically set in late summer or early fall. He’s expecting them to climb next summer as camps absorb steeper operating costs and insurance premiums. Prices typically increase between 3% and 8% year-to-year, but Rosenberg anticipates prices could potentially soar by 10% to 15% in some cases in 2023.

Demand for camp is strong this summer, coming from both repeat camping families and families that are new to the experience, Rosenberg said. The industry is bouncing back from the summer of 2020, when 82% of overnight camps and 40% of day camps didn’t operate and an estimated 19.5 million kids missed the experience.

Camp is about games and activities, but Rosenberg said the stakes are getting higher. More parents and more experts view camp as a crucial part of a child’s education, especially in the wake of remote and hybrid schooling, he said. “This is a really powerful educational and developmental experience, now more than ever,” Rosenberg said.

Wealthier families may not be fazed by increasing costs, said Rosenberg. But it could be a different story for low- and middle-income families, he added.

One GoFundMe statistic gives a clue. The amount of crowd-sourced fundraisers for child’s camp costs are up 50% in 2022’s first quarter from the previous quarter, a spokesperson said. The fundraisers seek an average $ 2,000.

Corbett is at peace with her camp purchase, even as she has to navigate higher costs. “It’s a payment of sacrifice and love,” she said.

Read also: Costco is not lifting the price of its $ 1.50 hot dog — but here’s the food item where it succumbed to inflation pressure