Home is where the heart is, and the money, if inflationary trends don’t cool.

That’s according to the latest Deutsche Bank survey of investors, who say that property will be their most preferred buy-and-hold asset class, if inflation stays elevated — averaging between 3% and 5% over the next decade.

“In spite of soaring across the world during the pandemic, property is the preferred store of value in an inflationary environment, while equities outstripped gold despite the latter’s huge outperformance during the inflationary 1970s,” said Jim Reid, head of thematic research, and strategist Tim Wessel, in the survey released on Monday.

Some 43% of respondents said property was the top buy-and-hold choice, followed by 33% who opted for developed market equities and 15% for gold. Cryptocurrencies were “not on the radar,” selected by 1% as a top asset, just behind cash at 4%.

Read: Fund managers’ cash pile is the biggest since 2001, says Bank of America

Data released last week showed the rate of U.S. inflation over the past year slowed to 6.3% in April from a 40-year high of 6.6% in the prior month and marked the first decline in a year and a half.

Deutsche Bank had more than 560 responses to its the survey conducted May 25 to 27.

Among other highlights, 69% of respondents said they believed the only way to get surging inflation under control is via recession, while 61% said they believe the Fed will try to get inflation back to target even at the risk of an economic slowdown.

Only around a quarter of respondents believe the the Fed will resort to a 75 basis point hike in the next 18 months, while more than half see the European Central Bank joining the Fed by hiking rates by 50 basis points at some stage. German annual inflation reached the highest level in nearly 50 years in May, according to data released Monday.

Finally, respondents were asked about whether developed-market equities have bottomed out for at least a few months. Last week, the S&P 500 SPX, +2.47% and Nasdaq Composite COMP, +3.33% snapped seven straight weeks of declines. But two thirds of those surveyed say the bottom isn’t in yet. 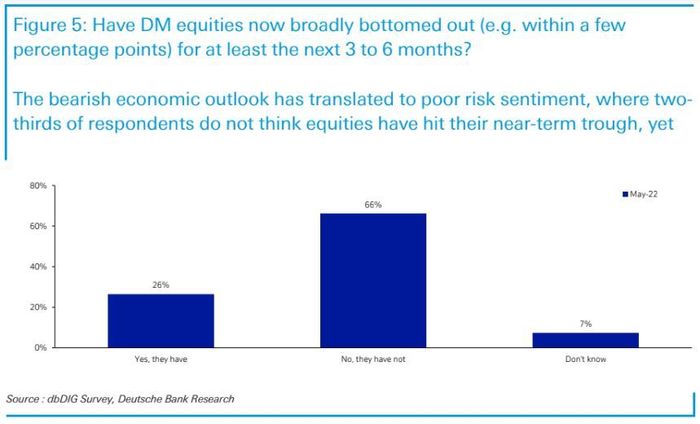 Read: Why the Dow finally bounced — and investors doubt the market bottom is in

The Wall Street Journal: Intel to list shares of its Mobileye self-driving-car unit

The Moneyist: ‘He was infatuated with her’: My brother had a drinking problem and took his own life. He left $6 million to his former girlfriend who used to buy him alcohol

Key Words: Elon Musk: Tesla would be ‘shut down’ if its cars spied on China