CEO paycheques in India’s largest information technology (IT) companies have grown disproportionately faster than the salaries of fresh hires in the industry.

The fat paycheques of top honchos in the industry have come into focus after the annual report of IT bellwether Infosys, released on May 26, showed CEO Salil Parekh’s proposed compensation, for his second term till March 2027, is Rs 79.75 crore annually, up 88 percent from FY22.

“This level of disparity in the pay between the CEO and a fresher shows the mercenary attitude at the top levels of the IT industry today,” said Mohandas Pai, a former chief financial officer of Infosys.

“The Indian corporate culture was always to take responsibility for everyone’s well-being in the company. Sadly, that is not the case anymore as those at the top are taking the American approach of just looking out for themselves,” he added.

According to experts, the increase in the pay of IT freshers has been so minimal that an entrant in the industry today may not be able to afford the same standard of living as an entrant 10 years ago.

“Just look at the inflation figures and you will see that the value of money would have fallen by half in the past 10 years. This means that a pay of even Rs 4 lakh today is the same as Rs 2 lakh a decade back,” said Pai. 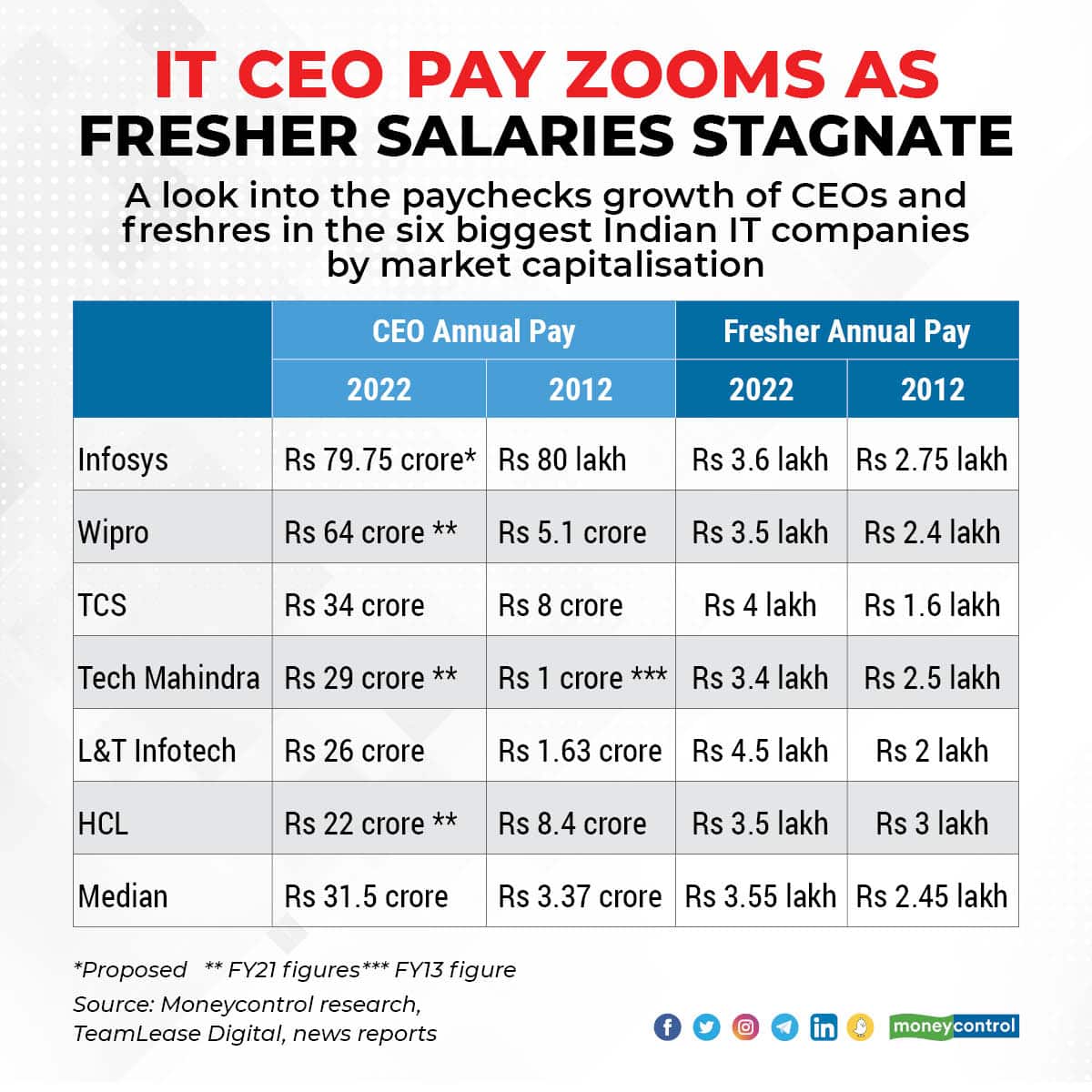 From the industry’s lens

Industry experts say IT fresher’s salaries have remained stagnant because of an oversupply of engineers. While estimates suggest that India produces 1.5 million engineering graduates every year, the IT sector’s demand is only a fraction of it; the industry hired a total of 360,000 freshers in FY22, according to news reports.

“When the supply of engineering freshers is four times the requirement, why would the companies pay higher? Moreover, while the technology services that the IT industry provides have become more sophisticated, the level of skills that most freshers bring to the table has remained the same,” said Rituparna Chakraborty, co-founder and vice-president of TeamLease Services.

Salaries at the entry level may be low, but industry executives point out that the first 6-12 months are like an internship for fresh hires wherein they have to be trained from scratch.

“After the first one year, an engineer typically gets a pay hike of 15-20 percent. Those who perform well thereon can expect their pay to go up by 50 percent in two years,” said Sriram Rajagopal, managing partner at talent sourcing firm Diamondpick.

“Also, the hikes that engineers with three years and above experience have currently gone up by 60 percent, compared to pre-pandemic levels, as tech is not a discretionary spend for companies anymore,” he added.

Signs of a systemic failure?

The problem of pay disparity may not just be at the level of freshers. Moneycontrol reported that the new pay hike for Parekh will further widen the gap between the CEO’s pay and that of an average Infosys employee as well.

Currently, the ratio of the median remuneration of the CEO to employees is 229 (excluding stock-based compensation) and 872 (including stock-based compensation). This figure was 397 at Tata Consultancy Services, 896 at Wipro, 110 at L&T Infotech and 271 at Tech Mahindra, according to their latest annual reports. This data point was not available for HCL.

“Such disparities in pay are there in the IT industry because there is no unionisation. Otherwise, the ratio would have been relatively narrower. In any industry where the supply of labour is higher than the demand, the individual worker will never be able to bargain for their pay,” said Professor Shyam Sundar, a human resources researcher at XLRI, Jamshedpur.

Industry figures, however, maintain that comparing growth in the CEO’s remuneration with junior-level employees is unfair as the top honchos’ jobs have gotten tougher over the years. They explain that the person occupying the corner office has had to deal with immense changes in the sector, a very competitive landscape and bigger expectations from the stock markets.

“If anything, it is the CEOs in the IT industry who have not been able to negotiate better pricing from their customers. How can their pay days get better while junior employees suffer? The bottom-line is that there is no justification for not paying the people who do the actual coding in a tech company,” he said.

According to Pai, the reluctance of the IT industry to pay its lower and middle level employees more signals a loss of compassion at the top, and actually hurts the sector in the long term.

“The cost of attrition is very high as it takes $ 5,000 to train a new employee at those levels. If they were to pay employees better, then the attrition rates of 30-35 percent in the bracket of 1-5 years of experience will come down,” he said.

Explainer: Why coffee could cost more at groceries, cafes