The “E” in environmental, social and governance investing has always garnered the most attention. New fund launches so far this year are no different.

Asset managers opened 24 funds in the first quarter, including 15 exchange traded funds, with sustainable mandates, according to Morningstar data. A fifth of those focus on climate action.

Alyssa Stankiewicz, an ESG research analyst at Morningstar, says there’s been strong interest in such funds as the financial industry coalesces around climate change. That includes the Net Zero Asset Managers Initiative, an international group that’s committed to the goal of net zero greenhouse gas emissions by 2050, spurred in part by 2021’s United Nations Climate Change Conference, or COP26.

Environmentally focused ETFs are evolving toward a greater focus on climate, but the strategies are subtly different, she says. Last month, Morningstar spelled out five types of climate-fund strategies, including low-carbon and climate-conscious funds, which tend to focus on reducing climate-related portfolio risks and investing in companies that positively align with the transition to a low-carbon economy. 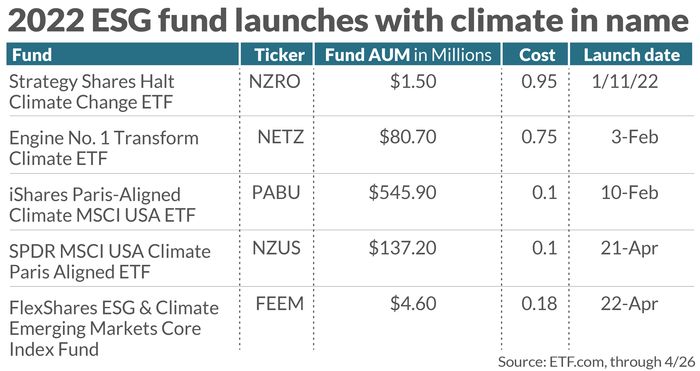 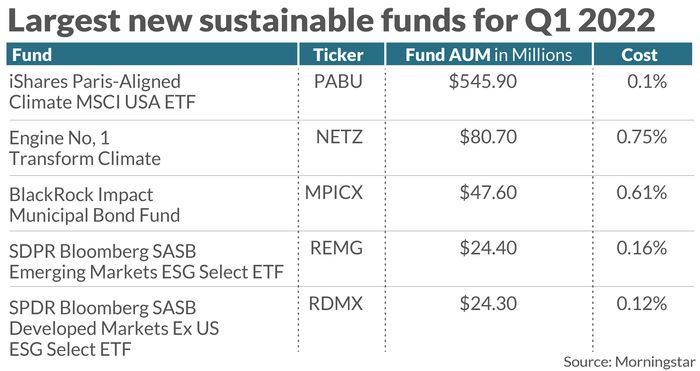 From ‘low carbon’ and ‘clean tech’ to ‘climate’

A number of the new ESG funds launched in the first quarter use the word “climate” in their names, including the $ 546 million passively managed iShares Paris-Aligned Climate MSCI USA ETF PABU, +2.80%, and the $ 80.6 million actively managed Engine No. 1 Transform Climate ETF NETZ, +4.21%.

Is “climate” just this year’s buzzword, the way “low carbon” or “clean tech” were in years past? In April, State Street Global Advisors changed the SPDR MSCI ACWI Low Carbon Target ETF to SPDR MSCI ACWI Climate Paris Aligned ETF NZAC, +2.61%. According to a press release, State Street explained the change was “designed to support investors who seek to reduce their exposure to transition and physical climate-related risks and who wish to pursue opportunities arising from the transition to a lower-carbon economy in alignment with the Paris Agreement requirements.”

Using the term “climate” may help a fund stand out in a crowded field. Including the first-quarter launches, Morningstar says there are now 555 sustainable open-end mutual funds and ETFs.

“Given the demand that we’ve seen in recent years, I think it’s to be expected that asset managers would be trying to grab onto that demand,” Morningstar’s Stankiewicz says. “However, I will say that funds that put it in the in the title should expect greater scrutiny from investors and higher expectations … especially as regulatory bodies turn greater attention to the space.”

Read: Four ETFs targeting clean water, wind energy, the smart grid — and one that has them all

Digging into the new funds

The funds use slightly different descriptions of the fund’s strategy, but essentially both seek to align with the Paris Agreement on climate change to limit the increase in the global average temperature to well below 2 degrees Celsius. Both funds cost 0.10% annually, and the ETF Research Center’s fund overlap tool shows their holdings overlap 86% by weighting.

Are the new funds the same as older ESG funds but simply with a new name? It doesn’t appear so.

A number of the new climate-focused ETFs are actively managed, which makes comparisons to a passive index unfair. But for investors who are willing to pay more in fees and want something different than the market-cap indexes, that’s an option. Engine No. 1 Transform Climate ETF costs 0.75% and is considered a large value fund by Morningstar. Its holdings are vastly different from the new iShares climate fund, with only 3% overlap, according to the ETF Research Center. It owns companies the fund managers believe will drive and benefit from the energy transition, including No. 1 holding General Motors GM, +7.45% and No. 9 holding Shell SHEL, +2.68%.

How do you know what fund is right for you? As usual with ESG funds, they require more due diligence to make sure they align with your beliefs.

You can count value-oriented ESG funds on one hand. That’s painful for investors as tech melts down

‘Drill, baby, drill’ is back amid the energy crisis, and that puts ESG efforts on the back burner

If we take these five steps now, we can ward off a climate disaster

Where Should I Retire?: We want to retire somewhere in North Carolina or South Carolina on $3,400 a month in Social Security — where should we go?