The market is in throes of unabated downswing with bears holding a firm grip and investors’ wealth getting eroded since the Reserve Bank of India made a surprise interest rate hike on May 4.

“Inflation continues to be a major headwind for markets. Consumer inflation in the US in April coming at 8.3 percent reinforces the market concern about aggressive rate hikes by the Fed and the possibility of a US recession in 2023. With the dollar index at 104 and expected to strengthen further, FIIs are likely to continue selling till Indian valuation becomes attractive. Even though DII buying is more than the FII selling now, it is not enough to lift the sentiment in the market since the macro headwinds are strong,” said VK Vijayakumar, Chief Investment Strategist at Geojit Financial Services.

Market’s preference for value over growth is reflected in the strength of high quality banking stocks which are even now at buyable valuations, he said.

Here are the factors that are pulling the markets lower:

US consumer price inflation slowed slightly last month, jumping 8.3 percent compared to April 2021, according to government data released Wednesday. The annual increase in the consumer price index (CPI) peaked in March at 8.5 percent but slowed last month amid a drop in energy costs, the US Labor Department reported.

CPI rose just 0.3 percent compared to March, after the 1.2 percent surge in the prior month, but excluding volatile food and energy goods, the index increased 0.6 percent – double the rate in March, the report said.

Catch all the market action on our live blog

Wall Street stocks closed sharply lower and Treasury yields fell in Wednesday’s volatile session as oil prices rallied and investors worried about the potential for an economic slowdown. US equity indices had traded higher and lower during the volatile session as investors picked through the US inflation data for clues about the Federal Reserve’s rate hike path. The Dow Jones Industrial Average fell 326.63 points, or 1.02 percent, to 31,834.11, the S&P 500 lost 65.87 points, or 1.65 percent, to 3,935.18 and the Nasdaq Composite dropped 373.44 points, or 3.18 percent, to 11,364.24.

Among the Asian markets, all the markets including Nikkei, Hang Seng, Shanghai and Kospi were down 0.5-1 percent each. SGX Nifty was down over 2 percent or 372 points and is trading at 15,795 level.

Oil prices rose more than 5 percent on May 11 after flows of Russian gas to Europe fell and Russia sanctioned some European gas companies, adding to uncertainty in world energy markets. Brent crude settled up $ 5.05, or 4.9 percent, to $ 107.51 a barrel, while US West Texas Intermediate crude climbed $ 5.95 a barrel to $ 105.71, a 6 percent increase.

Morgan Stanley has lowered its forecasts for India’s economic growth in the next two fiscal years, saying a global slowdown, surging oil prices and weak domestic demand would take a toll on Asia’s third-largest economy. Gross domestic product growth will be 7.6 percent for fiscal 2023 and 6.7 percent for fiscal 2024, 30 basis points lower than the previous estimates, the brokerage said.

The cut reflects a pronounced economic impact from the Russia-Ukraine conflict that has driven up crude prices, pushing retail inflation in India – the world’s third-biggest oil importer – to its highest in 17 months.

India’s central bank is likely to raise its inflation projection for the current fiscal year at its June monetary policy meeting and will consider more interest rate hikes, sources said, according to a Reuters report. In its first rate move in two years and its first hike in nearly four, the Reserve Bank of India (RBI) raised the repo rate by 40 basis points (bps) to 4.40 percent following a emergency meeting earlier this month. The RBI will “certainly” raise the forecast again in June, as it did not want to do it in the off-cycle emergency meeting in May, said the source, who did not want to be identified as the discussions are private.

According to Sameet Chavan, Chief Analyst-Technical and Derivatives at Angel One, the technical structure looks very disruptive, with all indicators signifying the trend southwards. Any breach below the 16,000 mark could open the possibility of re-testing the previous swing low of 15,700 odd levels. Yesterday’s recovery from the psychological level of 16,000 in Nifty, led by the banking space, bodes well for the bulls. Also, the midcap index saw some relief in the latter half of the day, indicating a further recovery in the coming session.

However, the downward trend remains intact till the time the unfilled gap of 16,480-16,650 on the higher end is not taken over. Since the macro factors have weighed down heavily on the global front, it would be important to have a regular tab on these developments. Going forward, the inflation data for the US market is expected to dictate the near-term trend among the global bourses. Meanwhile, aggressive bets should be avoided till the time global nervousness subsides completely, he said.

Disclaimer: The views and investment tips expressed by experts on moneycontrol.com are their own, and not that of the website or its management. Moneycontrol.com advises users to check with certified experts before taking any investment decisions.?

After the Bell: Sensex closes above 53,000, what should investors do on Thursday?

Trade Spotlight: What should investors do with Intellect Design BirlaCorp? 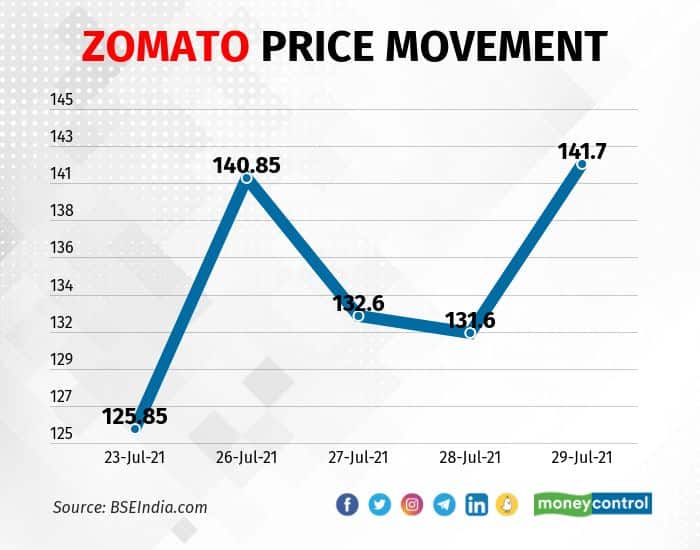